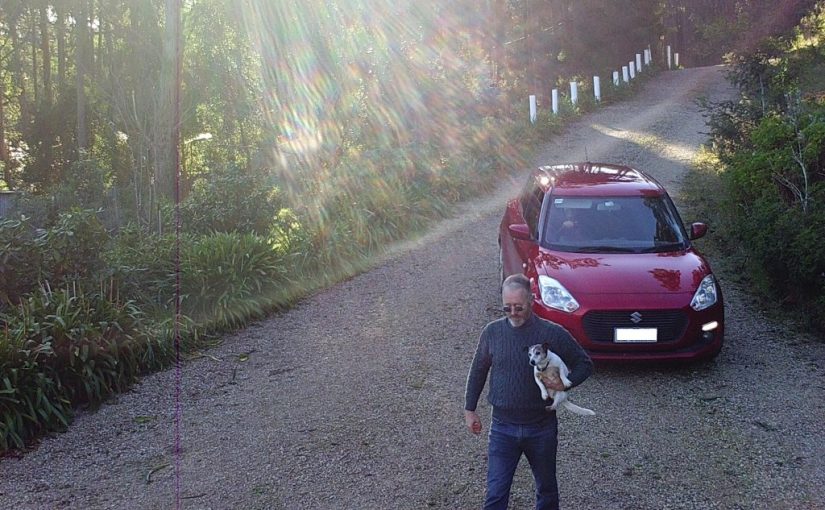 Tragedy lurks among the living. However, like enduring the presence of a grifter in our lives, we dare not trust that companion, but neither can we shake it off. Tragedy hangs onto us with a vice like and tenacious grip, and we dare not turn our attention away from it, because that is when it strikes hardest.

For a nineteen year old miniature fox terrier, she was one tough and gnarly old dog. She was the oldest dog that I’d yet encountered, and she never knew her advanced age. The old dog thought nothing of attacking the young sheep dog pups: Plum and Ruby. It was vicious, as she’d charge straight at them at full ramming speed only to sink her teeth into one or other of the young pups. They looked at her with a sense of awe and foreboding, and you could almost see the thoughts going through their brains: “You are like super bad, Girl!”

The new pups and old Scritchy weren’t mates. Far from it. The fighting became so bad between them that I could not leave Scritchy alone with the two pups. On days when the editor and I had to travel into the big smoke of Melbourne for work we used to leave the dogs in the dog enclosure. The enclosure has an area that is protected from the weather with dry bedding for the dogs to enjoy. There is also an area where the dogs can do their business. Scritchy spent most of her time in the area where the dogs did their business, fighting the two pups like an unrelenting aged Roman gladiator who has no other purpose in life.

On wet days we’d return from the big smoke only to find Scritchy soaked through to the bone due to the cold winter rain. But every muscle rippled and stood out on her small old body as if she were a reincarnation of the fictional character: Conan the Barbarian. Once inside the house she decamped for the wood heater and dried out. Then in a fit of true unhappiness she would express her displeasure by taking a wee in the house.

Scritchy became quite good at expressing her displeasure in that manner. And as the boss dog became older, every minor inconvenience used to annoy the daylights out of her. No other dog in my experience has ever acted so, but there is always a first time. You could almost feel the psychic pressure of an imminent moment of canine displeasure. First she made sure that she caught your eye. Then she’d fix you with a look known as: ‘Stink Eye Number Three’, as her body squatted and a pool of wee formed underneath her rear.

So, we couldn’t leave Scritchy out during the day in the dog enclosure with the two pups. Sometimes the fighting became so bad that the two pups would gang up on her and knock her off the veranda where she’d fall and land in a graceless and very unladylike manner.

Once she fell three feet off the veranda and landed on her neck. The editor saw this happen in slow motion and screamed, but was too far away to stop the inevitable fall. We rushed to her assistance. Scritchy’s head was at an odd angle to her body, and she was lying on the ground somewhat dazed from the fall. My brain was contemplating giving her the coup de grâce that many ailing chickens had received courtesy of a sharp and very heavy knife. But no, like a zombie Scritchy’s head realigned with her body and she got to her feet, and whilst unsteady for a short while, she soon resumed her normal robust good health. We were in awe of that dog.

Would the day be a two poo, or three poo day? Such questions became relevant. As her mental state deteriorated, she used to take pleasure in walking in her poo and then smearing it around the house. Coming home meant doing a lot of cleaning before anything else happened. As a containment strategy, most of the internal doors in the house were shut so that she didn’t have access to those rooms.

She also used to do the same ‘poo trick’ with the pups dry bedding in the dog enclosure. Little wonder the pups used to fight so much with her.

We didn’t put up with such nonsense for long because we had the bright idea to leave her outside the house when we weren’t home, weather permitting. Her dementia caused a lot of obsessive compulsive behaviour and she would spend the day running around and around the house. Every muscle on that old dog bulged with strength and resilience, but she was truly out there crazy. Anyway, as a strategy it worked well for a while, until like the fictional Star Trek Borg man-machines she adapted, and one day met us on the road far from the house.

The obsessive compulsive behaviour didn’t stop during the day. At night the dog was trussed up in blankets where she slept soundly next to the desk where this essay is now being typed. If that didn’t happen, or happen quickly enough, she would obsessively walk around and around the house. In and then out again she would repetitively walk, never settling down or even having any vague sense of purpose. It was enough to make a sane person, crazy.

Then the old dog began having seizures and her health took a sharp turn. During the seizures, her front paw would stick out at an odd angle and she would shake uncontrollably. One day she became so distressed that she pulled out a nail on her paw. It was a kindness to her to have her put down. But it was also a relief. She was like a black hole that absorbed anything and everything that came her way.

Individuals, Groups, Societies can all lose the plot. It happens. The real tragedy of the events was that we spent so much time caring for and accommodating the old dog, the proper training of the two new pups was neglected. And that was an error of judgement.

Earlier in the week, several misty and cloudy days proved to us that we require new batteries for the off grid solar power system. The power failed when the coffee machine was preparing the morning coffee – a fatal error on the part of the old batteries. We can be slow to come to a decision, but once the decision is made we acted swiftly and have ordered new locally made batteries of a lithium chemistry that we have basically no idea about.

Once the decision was made to replace the batteries, the sun decided that it was going to shine. The winter days since then have been glorious, although the nights have been very cold and one morning it was 0’C / 32’F and the weather station in the kitchen was forecasting a light snow shower which never eventuated.

On Saturday night the young sheep dog puppy Plum alerted the entire household that there was something important going on in the orchard. In a dubious frame of mind I ventured outside to have a look around. Holy Sheet! There were eight or so deer (including a Stag) in the orchard. Clearing them off is the job that Ollie the Australian cuddle dog (who is actually a Bull Arab breed) does to earn his breakfast.

Off and away, Ollie heroically chased the herd of deer into the forest. Without venturing far into the forest, he returned home and was rewarded with several beef jerky strips. He looked inordinately pleased with himself and promptly fell asleep with his girlfriend Plum.

A day was spent scrounging large and mid sized rocks and then hauling them to where they were needed.

In the above photo, Ollie and I am standing in front of a now completed rock wall. Six additional very large and heavy rocks were placed in that rock wall in order to complete it. Most of those rocks weigh more than I do and all of them were moved by hand. In addition to that the rock wall in the foreground of the photo was created. The rock wall is the edge of a garden bed with an English Oak and an English Elm planted in it.

The soil bridge at the end of a very long path which extends up above the house was also completed. That took two days of work, and a whole lot of soil which was excavated and moved using hand tools. After a days work, the soil bridge looked like this:

Another day of work completed the soil bridge. It is now a very wide and flat path which the low centre of gravity ride on mower can easily navigate.

A layer of the locally quarried crushed rock with lime was placed over the compacted volcanic clay surface and then compacted using a wheelbarrow full of rocks as a weight.

The soil bridge project took a lot of soil as can be seen when viewed from below the path.

The exposed soil in the photo above will soon be mulched and then planted out. All that soil had to come from somewhere, and in order to obtain that much soil we had to continue widening the other end of the path which sits up above the house.

Observant readers will note that there is still a bit of work to do on the path.

During the excavations a whole bunch of rocks were unearthed and put to good use.

All of the smaller rocks ended up in the steel rock gabion cage, which is rapidly filling up.

With a bit of extra sunlight, the plants which have over wintered are finally beginning to grow.