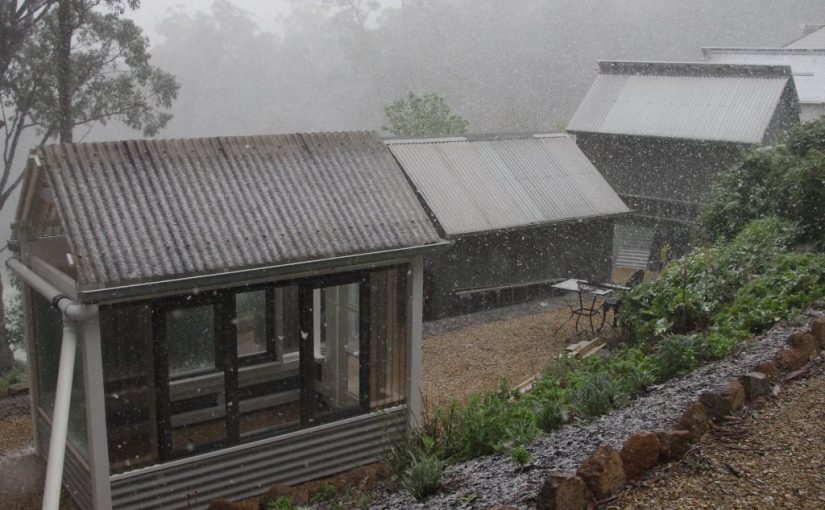 My worst fears were suddenly realised, for the editor was in the kitchen. The editor is not normally in the kitchen at this early time of the day. I hadn’t even had the chance to absorb the caffeine from the first coffee. It is of course a truth universally acknowledged that I should never be allowed out in public before the first coffee – it being hazardous and all. At the very least it would be a public outrage to do so.

But there the editor was standing in front of the kitchen sink happily chatting away with me as if nothing at all was unusual. In between chatting, she was busy cleaning up, having just prepared the first coffee. We were up early so that the greenhouse project got completed. I was not happy about this intrusion into my early morning kitchen world. It is hard enough on my bleary morning addled senses, that the kitchen also contained the two Kelpie pups who were naturally fighting over which puppy should hang off the reluctant jowls of Ollie the delightfully natured Bull Arab. The complications were piling up along faster than were the dishes.

Over the many long years of our relationship, I have deduced many workable strategies to keep the editor out of the kitchen in the wee hours of the candidly unfocused mornings. One such excellent and proven strategy is to bribe the editor with a Lindt chocolate ball plus a proper coffee brought to her in the bedroom. The editor enjoys these treats whilst she reads a book. And is also out of the kitchen. It’s a win-win as far as I’m concerned.

Since the unexpected death of my old mate whom I wrote about last week, I haven’t quite been feeling my normal upbeat self. For example, usually during the occasional time where the editor intrudes into the kitchen of an early morning, I can usually gloss over the unfocused reality that belies the actual workings of my morning brain. This week has been a bit harder than usual.

The editor is sympathetic to my distress, and has been very gentle with me this week – despite making the unfortunate error of an early morning appearance in the kitchen. The editor has suggested that some retail therapy may help, and whilst I now feel a bit cheap, it might just work. I’ve long lusted after a wood chipper. Some people dream of overseas holidays to exotic destinations. I dream of wood chippers.

The farm is entirely surrounded by forest. There is no end to the quantity of branches and leaves on the ground. A wood chipper would increase the surface area of those branches and leaves through the mechanical act of chipping. The outcome would be that the now smaller organic matter would convert back into rich soil more readily. Another alternative option is to burn all of the material off, and then spread the ashes around the farm. Burning the material off is often not possible for six months of the year due to the fire restrictions. It’s hard work doing that job too but the ash is great fertiliser. Another alternative is to leave the leaves and branches where they fall.

Unfortunately, simply leaving branches and leaves where they fall is not a bright idea. You may have heard of the epic scaled bushfires down here last summer? 46 million acres burned, and let’s not also forget the recent epic US west coast forest fires. The intensity of such fires are often fuelled by the fine dry fuels, those being the dead branches and leaves all over the place. So yeah leaving the fine fuels hanging around is a really bad idea which has been proven wrong so many times now you’d think that our society would do something about it. Anyway, best not to have such fine fuels hanging around is my thoughts. So, yeah a wood chipper.

Large scale fires are a bit of a concern. A few weeks ago we paid for the home insurance. Over the previous 5 years the policy premium has increased at an average rate of 15.7%. This year the policy increased by a solid 20% over the previous year. It’s an impressive effort, and left me wondering at what point in the future I’ll not be able to afford to pay for the policy. Fast maths displayed the compounding effects of such an increase, and fortunately such techniques are easy to calculate, even for someone as challenged with mathematics as I am. The answer makes me squirm a bit.

Fans of Modern Monetary Theory would do well to look long and thoughtfully at the above graph, because it tells the slow story of hyper-inflation.

It is also a truism that poverty can be determined by the difference between income and costs. And economists have long been pondering the present predicament where incomes are stagnant yet costs continue to rise. It is not a hard story to understand when you have to pay the bills. Even the economically illiterate will soon understand that story. Other less flattering words can be used to describe the predicament, and one such might be: decline.

But anyway, with all the continual forest cleaning up going on, well, it’s left me with a hankering for a wood chipper. Unfortunately adding a new machine to the collection of machines on the farm adds to the maintenance burden. I can do basic maintenance and repairs on many of the machines, but the reality is that they eventually wear out and/or break down. That’s where the local farm machine repair guys step into the story. Those guys require my income in order to perform the repairs on the various machines I own. So, adding a new machine to the collection simply raises the overall basic costs of the farm. Lets ignore the other unmentioned costs such as storing the machines in the shedding!

Earlier in the week I heard a discussion on the radio where politicians and academics were discussing and advocating for the future of the hugely complicated electricity system that operates in this country. It’s an epic sized and seriously complicated machine. The farm has it’s own micro-sized electricity grid, so I have some insight into the general concerns that the operators (who are usually not the policy makers) of those machines have to face on a day to day basis.

The basic stances of the various parties are actually quite simple. The population wants things to continue as they are, where they do what they do. Politicians want to retire the current coal fired power plants, whilst they struggle with the dilemma posed by removing their output. Recently the politicians have been suggesting constructing natural gas power plants as an alternative. The academics in the discussion know two words only: Renewable energy. And it may be a moral judgement on my part, but to my ears the academics sound rather smug about their positions. I’m a practical guy who is primarily concerned for how these things are going to work, so I have my own biases. However, I just worry that the hugely complicated machine will soon become so complicated that it will fail or worse become unstable, possibly needing more attention than even the local farm machine repair guys can provide!

I love renewable energy systems and have used them on the farm for the past decade, and that’s despite them making no economic sense whatsoever. The thing is, nobody ever asks the really hard questions about renewable energy systems. One total clunker of a question is: what happens at night (no solar), when the wind is not blowing (no wind turbine movement), and during a drought (no water for hydro)? It seems like an obvious question, but there you go – nobody is asking it. What happens next then becomes a very important question. It seems to me that the politicians and academics are hell bent on finding out. I have my own ideas on how it will work out, and they could simply just ask me. It’s not hard to do that.

Anyway, the farm uses solar panels to charge the house batteries which supply power to the house and farm. Extreme weather I have noted produces very little solar electricity. A few days ago, the afternoon sky darkened with thick clouds.

Despite being days past the spring equinox, and also a month into the official season of spring, snow soon began lightly falling over the farm.

Then the snow soon began to fall in earnest.

Before too long, there was snow everywhere and I began fretting for the many stone fruits and blossoms which had only recently began forming on the fruit trees.

Soon, the entire farm was covered in a layer of spring snow.

Spare a thought for the over wintered vegetables on the many garden terraces. I hope those plants are cold hardy.

The collection of ferns in the fern gully looked really lovely all covered in snow.

The many solar panels which supply electricity for charging the batteries, produce no power at all in these conditions. None at all.

The smart money on the day was to camp oneself in front of the wood heater, and that was where Ollie was when Ruby went to dry herself off.

Unlike theoreticians and politicians I tend to work with the world as it presents itself. Other people can believe what they want. I tend to observe how things are, and how they work, and then formulate practical responses. Last spring was the coldest and shortest spring that I can ever recall. Summer was then extraordinarily hot, albeit very brief. Autumn was at least more or less what I would expect. Those climactic conditions make for horrendous growing conditions. Some plants were OK last growing season, but many weren’t. When plants fail I know a few places which sell quality seedlings.

There is plant nursery in Melbourne which supplies excellent heritage open-pollinated seedlings, but it is now out of reach due to the extraordinary lock-down and curfew related to the health subject which dares not be named. With all those conditions and restrictions in mind, we decided earlier in the year to construct a greenhouse so as to propagate seedlings from our own saved seeds. It seems like a prudent response to circumstances.

The day before the snow fell, the roof sheeting was installed, as was the drainage guttering and pipes. The collected water is all directed into a garden bed. The door was also attached and painted.

Another day’s work on the building completed it. For such a small building, the greenhouse was extraordinarily complicated.

Most greenhouses are copies of buildings which have origins in very cold climates. Despite the occasional snowfall, the climate here is not really that cold. In fact the climate here can get quite hot, and plants inside a more traditional fully sealed greenhouse can cook and die. With that in mind, it is worth noting that plentiful ventilation around the entire upper part of the building was incorporated into the design. Additionally the windows are also openable if required. This allows for further ventilation. Will the building work as it needs to? I don’t really know, I’ve simply observed other structures that have similar arrangements and noted what worked and what didn’t.

Fingers crossed the building works, and hopefully next week we get to plant out trays of seedlings.