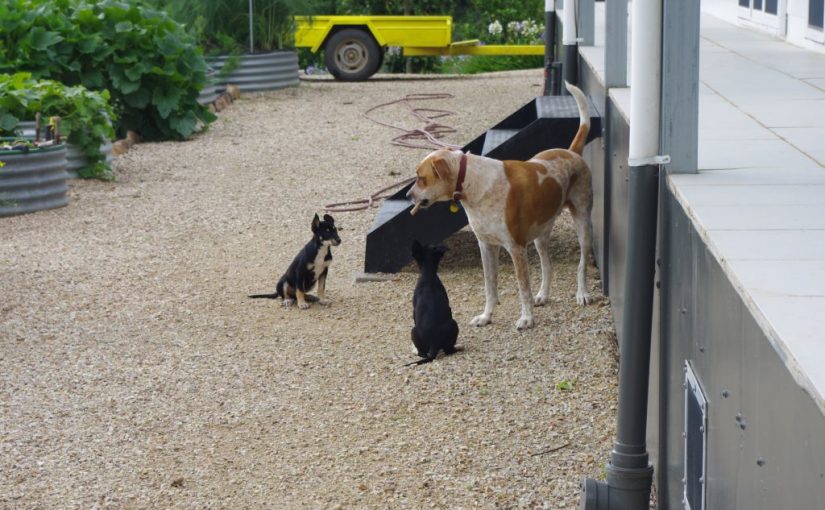 Ollie the Australian cuddle dog here. I’m technically an Australian cattle dog, but I just like cuddles more than cattle. Cattle are boring and they never do anything fun. Some folks train my brothers and sisters to hunt feral pigs and rogue cattle, but that all sounds like a lot of hard work to me. Cuddles are much nicer. And my boss human – Chris, normally puts me to bed each night on the green couch.

The green couch is a nice place. Before turning up unexpectedly to the farm, I was kept in small cages. I hate cages. And there was never enough to eat. The farm is much nicer, and the green couch is warm and safe.

Chris is my favourite human ever, because every night just before bedtime I get what is known as a ‘double fluff scritchy’. This bedtime ritual involves a head scratch and a chest scratch, thus the ‘double fluff’. And all the while Chris sings me a rather silly song about me being the best cattle dog ever. Silly song, but I rather like hearing it. Anyway, of course I’m the best cattle dog ever, everyone who is anyone knows that.

Last week my world was turned on its head. Two new puppies turned up at the farm. I didn’t ask for them, and anyway they’re sheep dog. Cattle are bigger than sheep, so I must be the superior dog. Maybe?

At first, the two new puppies did my head in, but I soon began their training. They might be not more than ten weeks old, but I say that if they feel confident enough to annoy me on the green couch, then they’re ready to be trained. So I have taken them under my guiding paw, so to speak.

I wasn’t always a farm dog. The first six months of my life I went from one foster home to another, and nobody ever sang songs to me at bedtime whilst I fell asleep on a green couch. Nope, that didn’t happen. And when I turned up on a farm, I had no idea about what a farm dog was meant to do. All I knew was humans yelling at me, and cages, always cages.

When I arrived at the farm, Sir Scruffy was a bit taken aback by my size. Even at only six months I was biggerer than Sir Scruffy who was the biggest dog. And the other smaller dogs (Scritchy and Toothy) had no idea what to make of me. They used to tease me by calling me a Shetland Pony, whatever that is. They used to be really mean to me, but we’re all good mates now.

However when I first arrived at the farm, my new friends didn’t much like me, they were scared of me. Can you believe that? After a few days Sir Scruffy canined-up, and took me aside to have a little chat. Well, first he tried to jump and bite my throat just to show me who the boss really was. I liked Sir Scruffy and agreed that he was the boss dog.

That was when Sir Scruffy told me the story about how he came to be a top notch farm dog. He learned everything he needed to know about being a farm dog from Sir Poopy. I so wanted to be exactly like Sir Scruffy, and so I listened intently to all that he had to say on the subject of farm dogness. From that day on, Sir Scruffy drilled me on important subjects such as how to deal with seven foot kangaroos and feral herds of deer. Practice runs were done on the unrelenting wallabies and rabbits. Then there was much detailed discussion as to which wombats did the best poos for snacks and should the poos be left for a few days to ferment. Sir Scruffy showed me the boundaries of the farm and ensured that I did not venture beyond those boundaries.

Sir Scruffy was a good teacher and friend, and since he died I miss him dreadfully – every single day. But the cycle of life goes on and now there are two new pups. I tell ya, the two newbies annoyed the daylights out of me.

But then I had the realisation that despite being only two years old, I’m the elder boss dog and I had to begin training the two new pups. I wonder if Sir Scruffy felt that way when confronted by me? Of course, I was a delightful puppy and never up to any mischief like these two new sheep dogs.

I’m handing on the lessons that Sir Scruffy taught me, plus a few things I worked out on my own. As the superior dog, I know the best poos to scavenge, and I’m teaching the newbies what’s what. They’re fast learners, but have wide streak of naughtiness that they’ll have to lose if they want to be proper farm dogs.

My favourite lesson is: Let’s pretend that a wallaby has snuck past the neutral zone and entered the property.

Other times I just get them to run and pretend that we are chasing a fox. Foxes are sneaky, and the sooner the two of them canine-up and accept the challenge of what it takes to be a top notch farm dog, the better for me. Then I’ll be able to slack off a bit and have a nice afternoon sleep on the green couch.

Unfortunately all that running around tires me out. But at least the two new pups are even more tired than I am!

Despite the new pups being only sheep dogs, I have high hopes for them.

Thanks for that update Ollie, and you’re doing a great job mate.

Earlier in the week I climbed up onto the roof and reconfigured the last of the wiring for the solar power system upgrade. The house solar panels were wired for a 24V battery, and I rewired the junction boxes so that every second solar panel is wired in such a way that those solar panels can now charge a 48V battery. Whilst I was up on the roof I looked over to the new garden terrace project and I was please with what I saw.

The shady orchard and chicken enclosure (which is obscured in the photo by a large pear tree) were looking pretty good from up there too:

Very observant readers will note that the left hand side of the new terrace project remains unfinished. In fact if they look really hard at the above photo, the observant readers might just notice a huge pile of firewood in that unfinished area. There are plans for this area and in order to accomplish the plans, we had to cut, split and move all of the firewood there.

We also planted a number of African daisies (Gazanias) into a relatively new garden bed. The plants are extraordinarily hardy and colourful.

At the other end of the new garden terrace project we intend to plant a small orchard. A few months ago a Lemon Eureka was planted there in order to test the conditions, and today we moved two other citrus trees into that small orchard.

One necessary trait for vegetable gardening is that of ruthlessness. Sometimes you just have to read the climate, know what has to be done before the next season and remove otherwise productive plants. We did just that and removed many garden beds of their summer greens, and then sowed winter green seeds. Of course the chickens have feasted upon the summer greens removed from the garden beds.

The three asparagus beds also needed a bit of tidying up as they slow down now as the farm edges ever closer to winter. I tie the spears up so that they don’t fall over and break in the occasional bit of wind. The plant uses the energy captured by the spears and so the plant is weakened when they do break.

On a very sunny cool day earlier in the week, I tested the wiring of the upgraded solar power system. Testing involved turning a lot of electrical appliances on and seeing just how much electricity the solar panels were generating. Turns out they generated as much electricity as they were rated for (5.24Amps x 15 pairs of 24V panels wired to 72V = 5.659kW). Not bad, especially given some of the solar panels are now a decade old.

The tomato harvest has moved from glacial pace into a slow trickle:

Almonds are just beginning to ripen. Fresh almonds taste far better than purchased almonds. Almonds are actually a variety of peach, and you know the kernel is ready to harvest when the furry green skin begins to crack open and reveal the nut within.

The Quince tree that fell over, or more likely was pulled over by a wallaby has surprisingly produced some fruit. The fruit still needs a bit of time to ripen properly (they’re ripe when the skin is fully yellow). The tree will be seriously pruned and then moved to the new small orchard when it goes deciduous in a few months time.

Quinces are one of my favourite fruits, although they are best eaten after being stewed. I once saw a confused looking bloke at the Queen Victoria Market biting into a Quince. Not good.

Medlars are an old school fruit that you rarely see these days. The trees are hardy and it is rare for birds to attack the fruit. Like persimmons, the fruit has to mildly ferment before it is edible, and we use to make a thick jam or a fine country wine. The jam has the consistency of vegemite, but fortunately not the taste (although having grown up eating vegemite, I quite like it on toast).

The olives have a long way to go before being ready to pick, but they’re looking good.