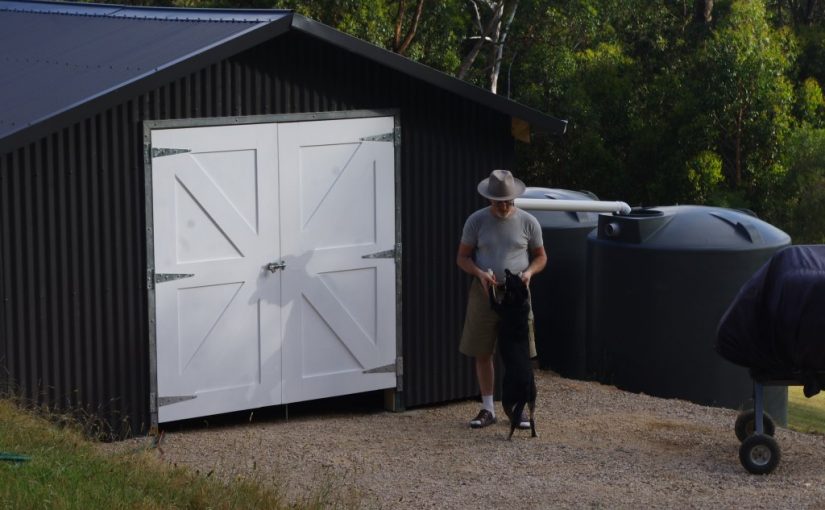 It sounded like a truck. The deep rumbling coming from the road sure was loud enough. The mist hid the truck. What was going on that weekend morning? Were the neighbours getting a large delivery? Was it a drilling rig for a well? Turns out that it was the garbage truck. But why on a Saturday morning? Tuesday is Garbage Day.

Fifteen years ago, garbage services were provided by a local contractor. Being city folks back then, we considered garbage pick up to be an essential service. I assumed all of the waste went into landfill, but didn’t really know. Anyway, for some unknown reason the contractor didn’t return our calls, and we learned to live without the service.

Years later, the local rumour mill suggested that an official moved into the local area. Whatever the case may be, the official garbage pick up service was extended into the local area. That service competed with the local contractor. As we’d learned to live without the service, we also decided not to take on the cost of the official service. The official service does offer recycling collection services via another truck. So assuming that my maths is correct, there are now three trucks doing the job that was previously done by a single truck, and possibly all the stuff is ending up in the same place anyway.

But the garbage truck on that misty Saturday morning was on the wrong collection day. Tuesday is Garbage Day. Realisation dawned, and the little light in my brain clicked on and provided the answer: The health subject which dare not be named. All was now explained. I’d read about this unintended consequence. There are now so many people either ill or more likely in isolation due to being a close contact (often with no symptoms or illness) that society is running out of workers to provide important services such as: picking up garbage.

It’s utter madness. Empty supermarket shelves, or difficulties in obtaining basic items such as standard sized timber is just crazy. It leads me to the conclusion that if ever the numpties in charge were to face a genuine crisis, we’d all be up the creek without a paddle! I vote no confidence.

For some unknown reason the Editor and I live in the state with arguably the most draconian reaction to the health subject which dare not be named on the planet. After all, we must be proud that the city of Melbourne was locked down for longer than pretty much anywhere else. When the city folks were banned from leaving the city environs, the numpties in charge established a ‘ring of steel’ around the city. The idea was to establish 24/7 manned checkpoints on roads leading out of the city. The police and military manned the checkpoints and they checked all drivers for identification and of course ‘authority to travel into and out of the city papers’. A creepy experience to regularly endure.

However, the reality was that public servants manning those checkpoints had little shelter from the weather. During heavy rain the checkpoints used to wave traffic onwards. And once I recalled that it snowed on the closest checkpoint! At least they had a good looking brazier to warm themselves at on cold winter nights. For sheer style it beat the 44 gallon drum braziers I’ve seen in use on official checkpoints in Third World countries.

But the stupidest thing of all was that there were only a hand full of checkpoints in operation, and that left the many, many back roads open to travel. The fines for being caught were horrendous, but on the other hand the checkpoints tied up a lot of police (and military) resources. I recall that eventually the police union may have suggested as much and went on to outline more effective operational responses.

And that was when things got a bit err, effective. The ring of steel was eventually disbanded and the police got their wish. And oh boy, but were they effective or what. Living near to the edge of the city / rural divide, holy carp, there were suddenly police everywhere. It was quiet in this area before with the ring of steel, but it sure became super quiet when the police took charge of implementing the lockdown policies.

Earlier in the week I was reading a fictional book covering the Arthurian saga (Jack Whyte’s book Uther). The characters were discussing the difference between strategy and tactics. Strategy is defined as: ‘a plan of action designed to achieve a long-term or overall aim.’ Whilst Tactics is defined as: ‘the art of disposing armed forces in battle and organising operations, especially during contact with an enemy.’

Strategy and tactics answer entirely different questions. Strategy covers ‘what are we trying to achieve’, whilst tactics covers ‘how do we make strategy happen’. And right now I see the numpties in charge are getting so involved in tactics that it looks like meddling. Those folks lack the experience to avoid unintended consequences like failure to collect garbage and empty supermarket shelves. I vote no confidence. And you’d be hard pressed to say with any certainty what strategy it is that we are pursuing as a society. Where is the vision these days? What are we trying to achieve? That is their job to explain, and it ain’t happening. So yes, I vote no confidence.

The weather this week is still crazy. One day it is hot and then the next it is cold. Thunder storms have hit hard, then missed at other times. Fog and mist can hang around the farm all day long. Suddenly the sun will break through the clouds and the intensity can knock you around.

Work on the shed project continued. Both ends of the shed were clad in corrugated steel sheets. The front was completed first.

The barn doors had been painted, and on a misty morning we hung them.

The rear of the shed was also clad with the corrugated steel sheets.

We’ve been busy recycling materials for this project from other sheds. Nothing goes to waste here, and the project itself has produced only a tiny amount of waste. The door was recovered from another shed and then installed.

Racking for eight solar panels was also installed on the roof of the shed.

For obvious reasons, there wasn’t a lot of free time for me or the Editor over the past week, let alone the two and half months this project has taken from idea to completion. However, this coming Friday and Saturday, the annual Triple J hot 100 commences. The radio station is billed as a national youth radio music station, but in reality it plays a whole bunch of independent artists, focuses on current music and plays more Australian content than possibly all other radio stations combined. Plus being paid for by the taxpayer, there are no advertisements. I reckon it is one thing the government got right.

Anyway, the trusty old high quality FM tuner I use to listen to the broadcast has been in need of repairs. The machine is three decades old and one of the components on the power board looked close to failure.

The cost of the replacement part was about fifty cents, and so I’d replaced all of the cylinder like electrolytic capacitors on the power board. Having some skills in electronic geekery from way back, I was able to do the repairs. I don’t actually understand how the machine works, but I know enough to repair it. There are not many people or businesses around which provide this sort of service these days, and those that do, will charge well for it because it is slow and painstaking work. Anyway, there is probably very little demand for the work to be done. It’s kind of sad how wasteful we are as a society. But hopefully with the new parts, the machine will keep providing high quality music for many decades to come and that puts a smile on my face.

Some of the wet weather at night this week brought the tree frogs out to catch insects attracted to the lights of the house.

In produce news, the three year old grapevines are growing strongly. Grapes and strawberries are the only crops here which are entirely fenced off from the wildlife. And even then, the small blue fairy wrens can easily get in and then out again of the enclosure.

Blackberries are just beginning to ripen. These plants are a prolific producer of berries and we grow only the thornless varieties. It is worth noting that all around the area there countless blackberries, all of which have wicked thorns. Most of the fruit goes unpicked, although the foxes and birds do their best to harvest the berries. From time to time the local council sprays the plants, but they always regrow.

The farm supports a lot of wildlife, and on warm sunny days the air hums with insect activity. For some reason the leek flowers attract butterflies like no other flower seems to.