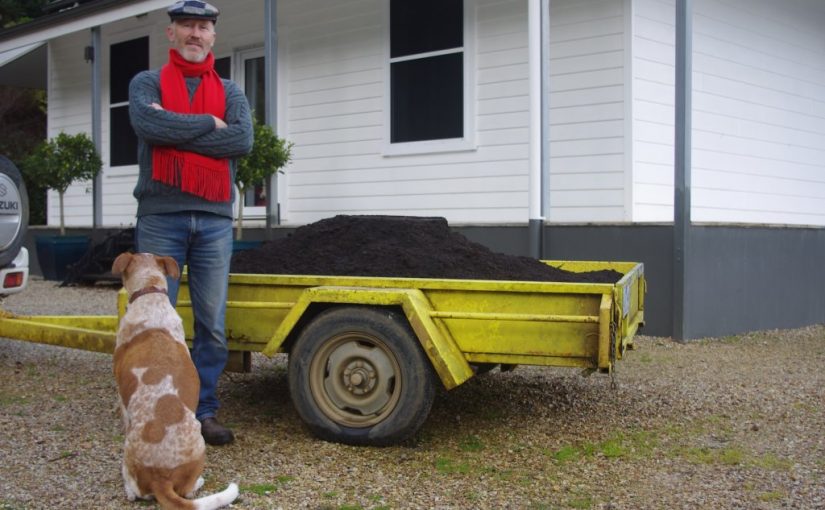 Ruby has been the hardest dog to train. She has her own ideas about things. There are opinions. Distractions. Possibly important Kelpie business that needs attending to. I’m cool with all that. However, there are certain basic principles that Ruby has to abide by here. And one of those principles is that all of the dogs have to hang around with me, or check in with me every few minutes.

There is an old saying which suggests that with freedom comes responsibility. It is an impossible expectation to monitor the dogs every waking moment, so somehow the dogs have to accept responsibility for their actions. Even when I managed teams of people I’d simply point them in the direction, provide assistance and education where needed, let them fail, but most importantly set and enforce boundaries.

Ensuring the dogs know to check in with me every few minutes means that they can enjoy their freedoms, but can’t go too far, or get in trouble for very long. There are a lot of risks living here, and Sandra and I are hardly immune from the many risks either. Already the other two dogs Ollie and Dame Plum, have encountered a deadly snake a year or so ago, and they both chose to leave it well alone. In fact to their credit, they alerted me to the danger. We’ve had huge trees fall over with only a few moments notice. Staying alert keeps you out of trouble here.

The other day, Ruby took herself off on a prolonged adventure in the surrounding forest. She came back all flushed with excitement, except she knew she’d done wrong. Breaking one of the guiding principles meant that there had to be consequences. We put her on the chain.

It wasn’t just any chain, but a very heavy, and ironically named: Dog Chain. Ruby could move around just fine, but it took a lot of effort to do so. I’d heard of trainers using a chain as a training tool for Kelpie’s, but never expected to find myself having to do so. And yet there the dog and I were all the same. After ten minutes on the chain, I let her run free, and to my relief the lesson was learned and Ruby now checks in with me every few minutes. She knew, she just didn’t care. Now she cares. The chain is regularly shown to remind her of her responsibilities.

It sure is a hard way to learn. But then, accepting limits is verboten. One of the biggest issues at the recent Federal Election seems to have been campaigning about the issue of Climate Change. Whether the candidates were for or against Climate Change, I couldn’t really tell. However, the old government was chucked out and a new one installed. The new one seemed to be making a lot of noise about the issue, and fortunately we can now be clear on where they stand, because only two weeks into their office: Short-term fix to gas crisis is to bring coal plants online, Resources Minister Madeleine King says

That’s was a relief. For a moment or two there I thought they might do something really exciting like attempting to run the national mains electricity grid entirely using renewable energy technologies. As someone who has lived with this renewable energy technology for over a dozen years now, I don’t think that the people voting for Climate Change, are going to enjoy the outcome from employing this technology.

The winter solstice is the time of year when the sun produces its feeblest energy. That’s winter for you, and in most parts of the world winter is a cold affair. Down here, the past fortnight has been the cloudiest continuous run of weather that I can recall. The solar power system records the amount of available sunlight each day, and I record that number. There was one day during this fortnight where we recorded more than an hours peak sunlight, and two days where exactly an hour was enjoyed. The rest of the fortnight was far less than that. And little sunlight means little available electricity.

In order to accommodate the restricted amount of electricity at this time of year we have to accept limits on our usage of that energy source. We are unable to do whatever we want to do, whenever we want to do it at this time of year. And propositions such as charging a large electric vehicle from our system is laughable. That’s what limits look like.

Seems that each year that goes by I pen an essay on the realities of living with renewable energy technologies, and it always seems to come back to the core issue of accepting limits. The essays could be interpreted as a warning. As I type away at this essay I’m concerned that the batteries in the house are 50% full (and the bottom 20% cannot be accessed). But of greater concern to me is that energy prices in the wider community are becoming more expensive.

Becoming more expensive doesn’t mean that we’ll suddenly run out of Oil, Coal and Gas before the next blog entry. Nope, far from it. What it means is that for each slow increase in the price for energy, an ever larger chunk of the economic output will be required to pay for the energy. It’s very possible that at some point in the future we’ll have access to energy, but few will be able to afford the price.

When I read articles in the media about the increase in prices for energy, ironically coined: Bill Shock, I tend to wonder at what point will people accept limits and just use less of the stuff? Nobody can really know another person’s motivations, but I suspect that upon suffering ‘Bill Shock’, people know they have to use less, but like Ruby, do they care enough to do so? I can’t really say for sure what will happen in the future, but I reckon there will be consequences.

It sure has been cold and wet this week. One day we were working on the greenhouse and the cold wind was chilling my bones, and it was a relief to complete the work, then head back indoors where I could warm myself in front of the wood heater.

We began installing the remaining sheets of clear corrugated polycarbonate onto the external walls of the greenhouse.

We’d run out of polycarbonate sheeting and picked up a further four sheets which should be enough to complete the cladding job. Each sheet installed was a custom fit for the available space, and some of the cuts required were quite fiddly and slow.

We’re confident enough of completing the construction tomorrow, that we’ve even purchased a trailer load of compost plus many bags of soil mineral additives for the first raised garden bed to be installed in the greenhouse.

The local wildlife enjoys the benefits of the work we do on improving the soils.

The ground cover plants in the paddock and orchards have a surprising diversity of plants. At this time of year, the mosses tend to show their best. Some of the largest of all mosses grow here (Dawsonia superba), although the plant hardly looks like a moss.

Each week seems to produce a new type of mushroom and the variety this week is almost inky black.