Last week, I wrote: “probably won’t cool down much more overnight due to the cloud layer”. As soon as last week’s blog entry had been published the thermometer started to drop. Eventually it settled on about 2 degrees Celsius (35.6F) and as the dark of the early evening settled in, it was probably a little bit cooler than that.

The stars put on a good show that night, with the Milky Way being clearly visible as a twisting streak of cloud light across the sky. Even the Large Magellanic Cloud was visible as a much smaller cloud of light. Still it was a cold clear night – for here anyway.

The next morning, the beginning of a week-long storm rolled in. The morning found me inside pretending to work, looking outside at the storm. By about mid-morning, I went outside because I couldn’t believe it. It was actually snowing. Nothing settled on the ground, but it was definitely snowing.

Snow is a bit novel Down Under, so I rugged up and jumped into the trusty old Suzuki and drove up to the ridge on the mountain range doing a bit of snow chasing – purely for research purposes, of course. The main ridge of the mountain range is about 300m (about 1,000ft) above the farm so I’d expect it to be about 3 degrees Celsius (5.4F) cooler than here and there’d be a good chance of snow settling on the ground. Again, purely for research purposes, I took the camera along and here is what I saw: 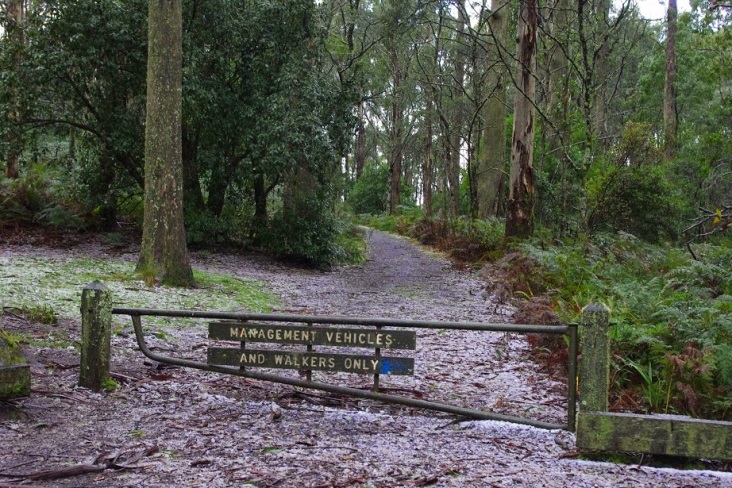 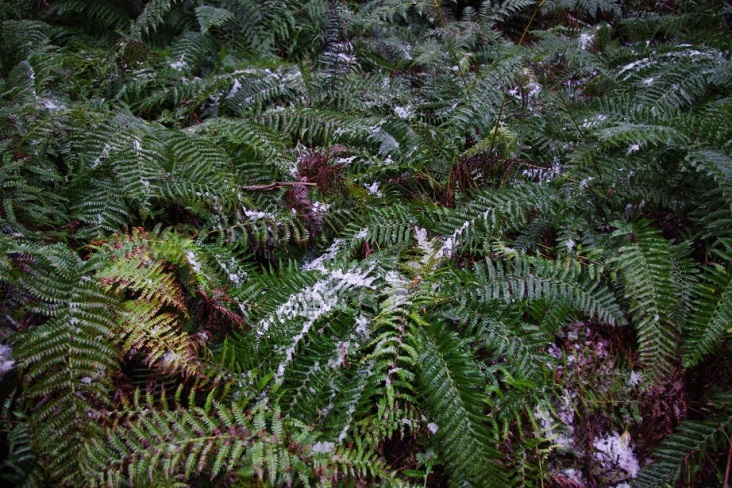 Oh yeah, the research also included a cappuccino and a very excellent pear and cinnamon crumble muffin at the local café / post office / general store along the way. Truly, it was a hardship that had to be endured, purely for research purposes, of course. 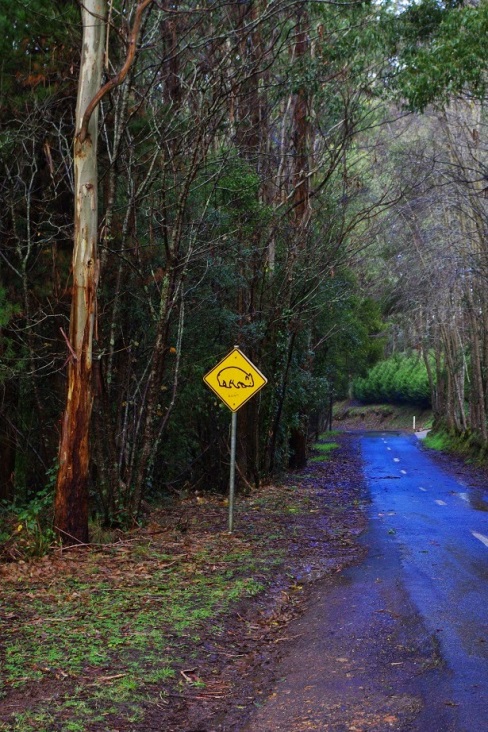 On the way back I spotted this road sign and added a photo of it because outside of Australia, people have probably never seen this particular road warning sign (wombat)!

Anyway, I estimated that I’d be up and back within 40 minutes and no one would be the wiser. A cunning plan! Needless to say, that I’d completely under estimated the impact of the high winds and recent rainfall on the trees here and my path back to the farm had been cut off because of the very large trees which were now lying horizontally across the road about 2 kilometres (1.24 miles) south of the farm. Not good.

So, I drove right around the mountain range and approached the road from the northern end only to again get within 2km (1.24 miles) of the farm on the northern side. This was due to more fallen trees.

It was at this point that I realised that heading out on a really windy day like that – purely for research purposes – without the chainsaw and recovery gear was a really dumb idea.

Needless to say, the lesson to be learnt here is that in dodging work – for research purposes – you may just find yourself – through no fault of your own – having to do even more work!

Breaking chicken news: 9 of the 14 chickens are now happy to use the new vestibule exit into the orchard. Egg production is still only about 1 egg per day and it is Araucana and the Silkie_chickens who are providing these. In the colder weather, I leave a layer of their bedding straw on the floor of their shed so they have an area to scratch around in on cold wet days.

The excavations are continuing too and you can now see the flat area where the new water tanks will be sited. Another stump was removed during the process of the excavations too. You can see in the photo the soil line on the stump itself. The stump was like the iceberg that sunk the titanic and the axe was used quite a bit that day. 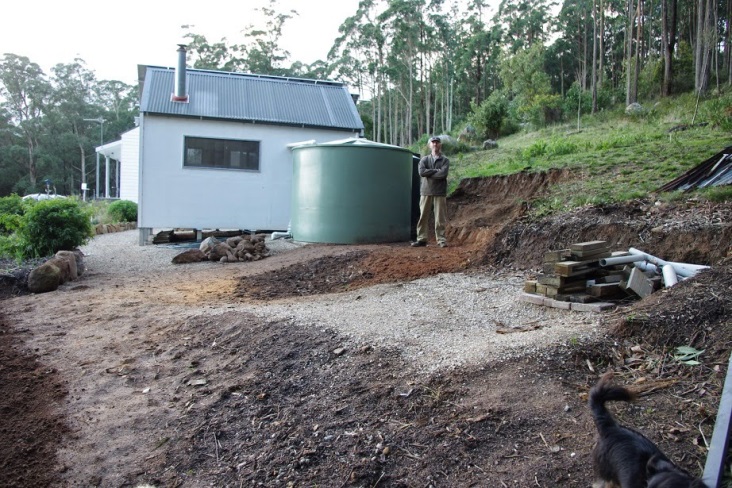 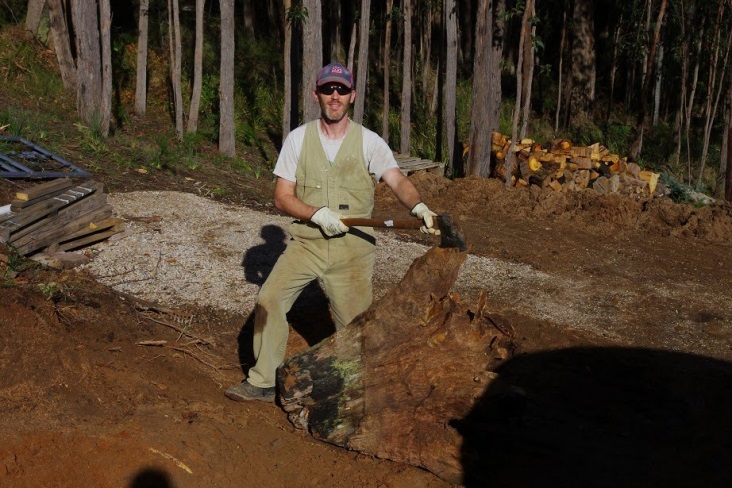 Due to the continuing wet and cold weather, in the past few days the under-cover firewood storages were completely refilled too. The firewood had been cut 3 years ago and despite being quite damp, it burns very hot. 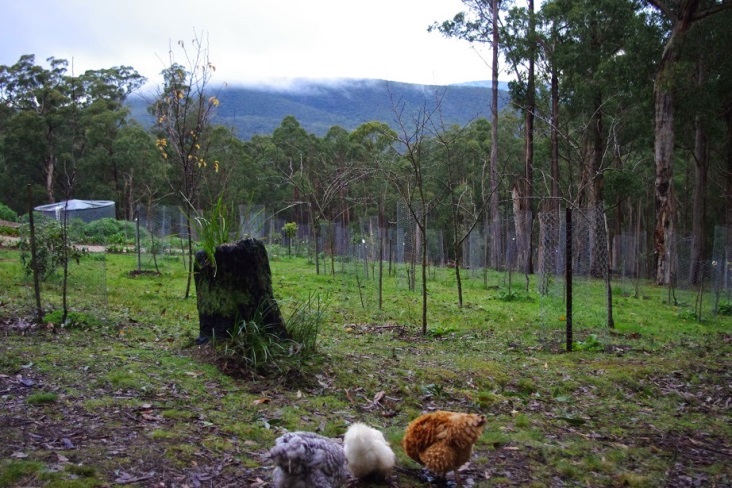 Some of the animals here love the wet weather. One of them is the Kookaburra. This bird is very similar to a Kingfisher and has a huge and very sharp beak which they regularly sharpen on the trees. You definitely wouldn’t want him to take a peck of your hand. He loves the wet weather because the worms and grubs come to the surface of the soil for a bit of a breather and then he swoops in and eats them. Kookaburras are also very partial to tree frogs (which spend an awful lot of time on the ground given that they’re meant to be tree frogs). The bird lives in a small family unit and they keep a close watch on each other and call out with a distinctive laughing call when danger is lurking close by. They are amazing flyers and can speed through thick forest as if there were no obstacles in their way (the x-wings of the bird world, apologies for the dorky reference!).

I like having them at the farm here as they’ll call out when there is something unusual going on and it would be unwise to ignore their message. They also catch and eat snakes, which is fine by me. 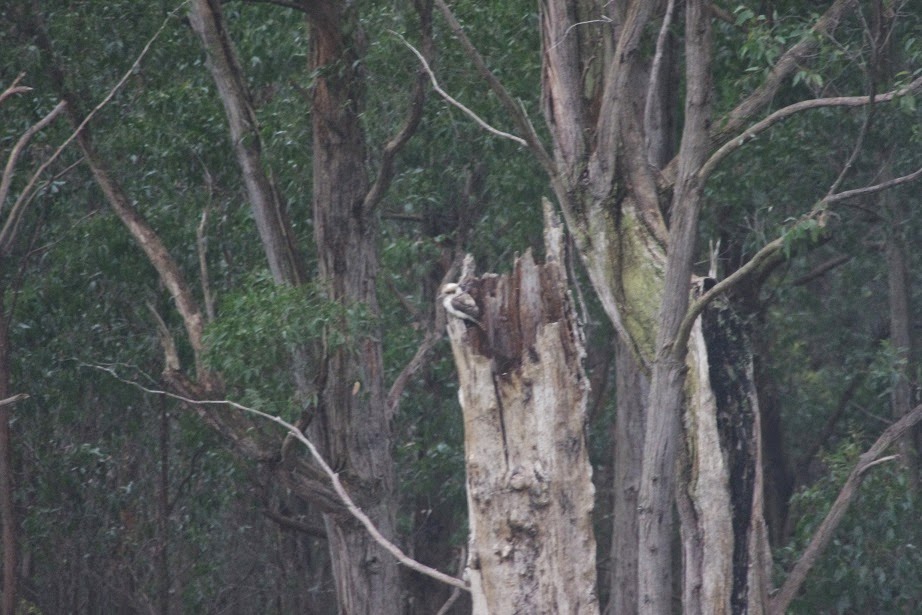 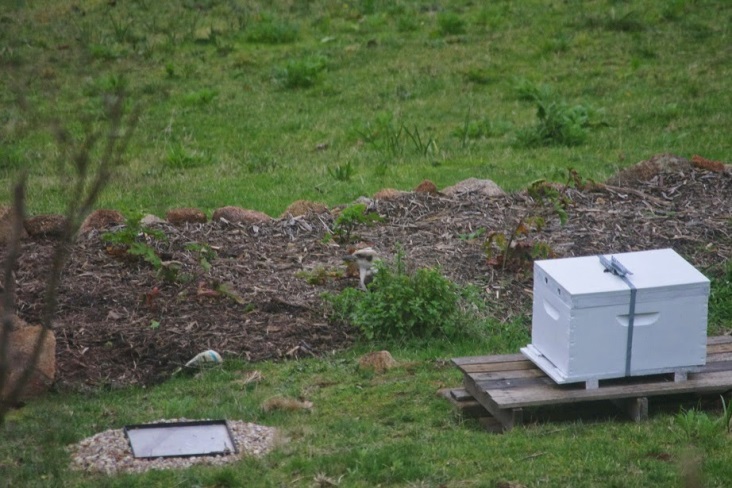 Posted by Cherokee Organics at 18:41 6 comments:

They say that life puts theories to the test.

A couple of weeks ago, I remarked that I could never understand why people stated that chickens were stupid. For their size, they seemed to be reasonably alert. They know when the wedge tail eagles are flying overhead looking for a tasty chicken sized snack and they all communicate as a flock and run for the cover of the trees.

When the Kookaburra sings, the chickens stop and listen to whatever message the wild birds are providing.

Yet over the past week, I’ve come to think that chickens are not stupid, they simply just don’t like change.

Over the past few days, I’ve improved – from my point of view anyway – the vestibule to the chicken enclosure. The chickens haven’t liked it one bit and now refuse to use the new vestibule to exit the hen house. They’ll all peek outside into the food forest, but not take a single step onto the pleasant all weather surface. The inside of the chicken house has a concrete slab, so I don’t believe that they’re having troubles with the flag stones in the vestibule. Maybe, they just don’t like change… 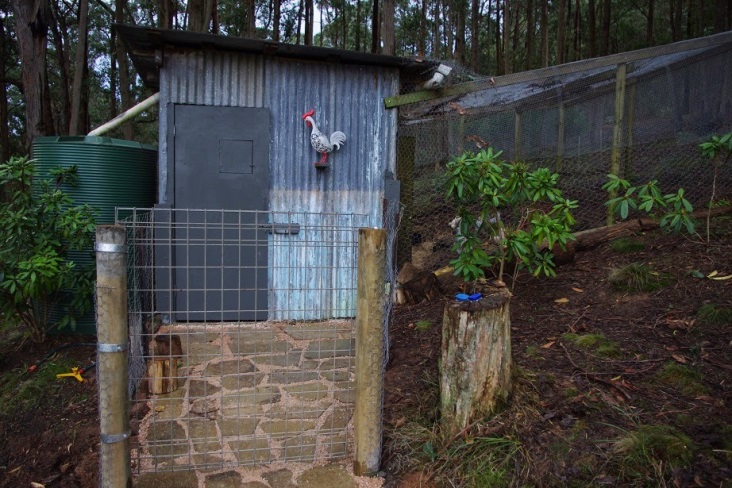 The vestibule became a very necessary addition after a visitor to the farm thought that they’d check out the chickens and their enclosure. Well, I never quite expected that the visitor would stand in the open door way to the chicken enclosure – reluctant to enter, marvelling at all of the chickenness – and then suddenly all of the chickens went – WOO HOO – it’s an early orchard scratching and digging time – at very high speed. It wouldn’t have been a problem except that Poopy the Pomeranian was roaming around the farm, spotted the chickens and in the ensuing chaos decided that an Isa Brown “frizzle” chicken would make an outstanding early dinner snack.

Oh well. I’ve had to scare the chickens into using the vestibule and it seems to be slowly working for about half of the flock. 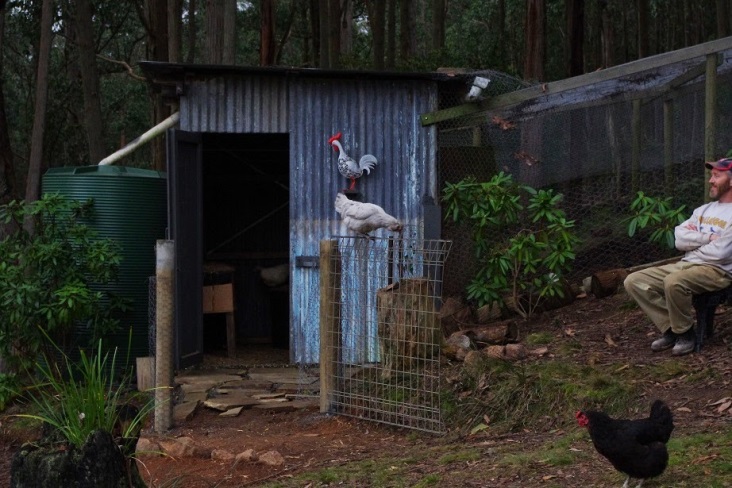 This is one of the cheeky one year old Araucana chickens who is a little bit flighty.

At this time of year, the 14 chickens – all bar one of whom are heritage breeds – lay about 1 egg per day. Yesterday the first of the larger blue Araucana eggs was delivered. For the past month or so, only the Silkie_chickens have been on the lay. They generally lay during Autumn and early Winter because unlike most chickens, they do not seem to have to regrow their feathers after the summer moult during this period. Chickens generally can not regrow feathers and lay eggs at the same time, so Autumn is generally a lean period for egg production.

It hasn’t all been about the chickens though as I’m in the process of increasing the water storage here and hopefully adding another two 5,500 litre water tanks (1,450 gallons).

However, being on the side of a mountain, means that there is no flat land, so any flat land has to be excavated. I can’t afford to pay for an excavator to come in and dig out the site and neither do I wish to repair the damage that those machines do. Therefore, I chose to dig out the site by hand.

Nothing is ever easy though as huge rocks (volunteer garden bed retaining walls) float through the clay / volcanic loam and there are some tree stumps which I’m pretty certain pre-date white settlement. One of the stumps was so big it took four work days to remove. Fortunately the other four stumps seem to be a little quicker (or maybe, I’m just getting better at digging them out and cutting them up?). 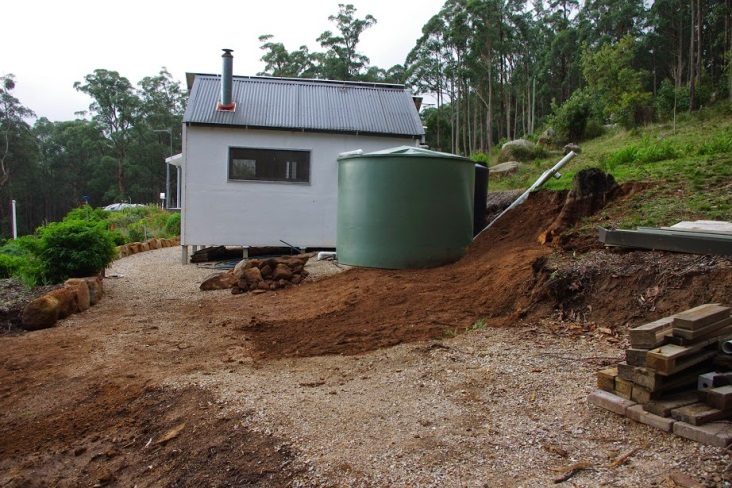 To put that stump to the right of the water tank in the photo in perspective the diameter of the green water tank is 3m (about 10ft).

The site itself will probably take another week or so of work before it is ready to receive the new water tanks. I also intend to build a steel lined wood shed on the site too.

The excavated top soil is going to good use too as it becomes new garden beds. You can never have too much flat land. 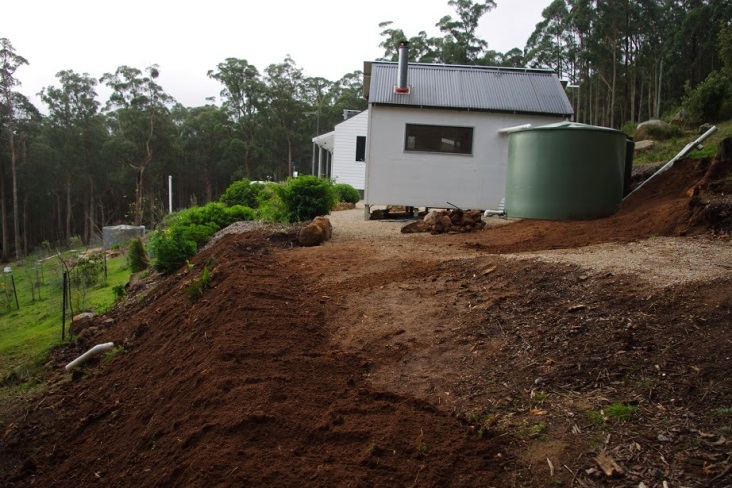 The soil has plenty of organic matter in it as I have been mulching that area for several years now.

The weather here has been generally cool and cloudy and at about 4pm, it is 6 degrees Celsius (43F) outside and probably won’t cool down much more over night due to the cloud layer. However, the humidity is about 99% and so far this year there has been 385mm (15.5 inches) of rainfall. 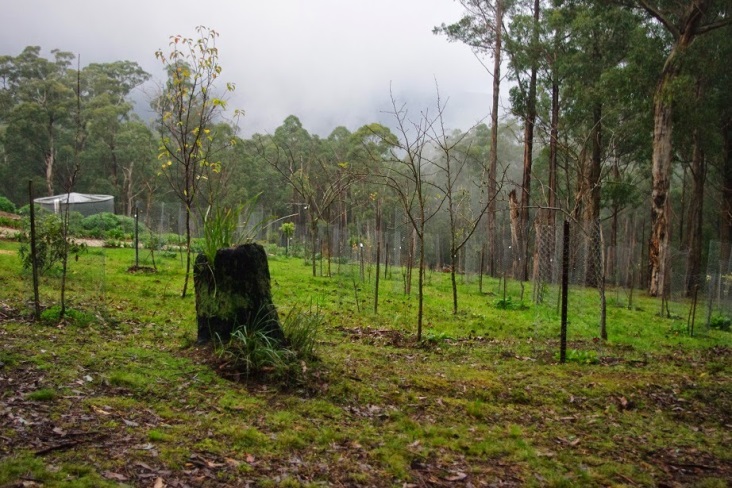 It is interesting to note that because of the warm winter, many of the fruit trees have not as yet gone fully deciduous. The large tree to the left of the stump is a snow pear (which is an ornamental pear).