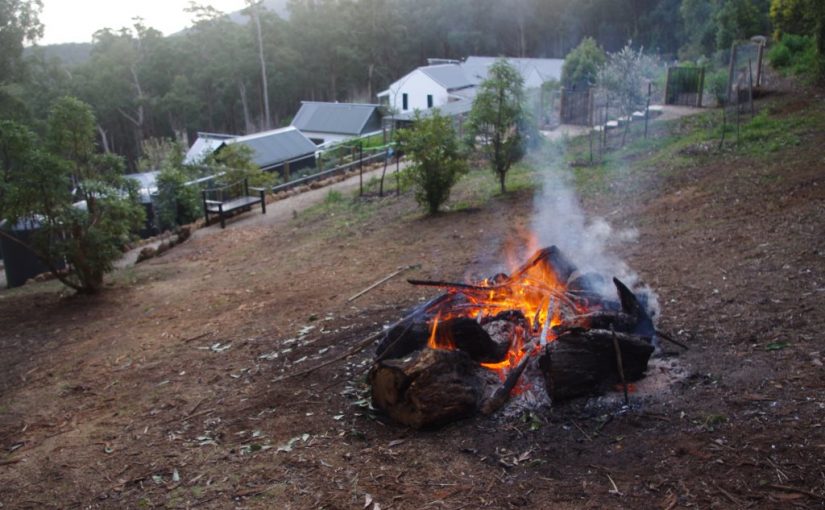 The vehicle was in a quiet area. The only building in the area is the local hall which is used nowadays for weddings and other events. It is a beautiful old weatherboard hall of simple construction, and has withstood the tests of time. The background is one of alternating paddocks and forested blocks. It’s not far from here.

A middle aged couple were wearing the sort of work gear you don’t much see in offices. The man was cutting timber into firewood sized chunks with the chainsaw, whilst the woman was hauling the chunks into the trailer. Love is a wonderful thing, and the weather was nice.

Economic times sure have turned. Of late, husbands and wives, fathers and daughters and various other combinations of family members have all been spotted with their oversized vehicles and attached trailers, scrounging for firewood by the side of the roads. It’s a truth universally acknowledged, that a shed full of dry and seasoned firewood is like an account at the bank (perhaps the Cherokee Bank of Firewood, or CBF to those in the know). Like being full of mad cash, only better.

Spare a thought for the good people of Melbourne, something like five million inhabitants all up, for they are in lock down. Slightly more people have died on the roads in this state already this year, than of the subject that-dare-not-be-named for the entire continent. However, for six weeks, there are only about four reasons that the inhabitants in that large city can leave their houses. And today the wearing of masks – any mask at all or even scarf – has become mandatory. The mask rules had to be flexible because there aren’t actually enough masks to go around.

Fortunately the army and the police are there to assist the population comply with the new rules, and there are fines for those who dissent (and why would you not want to wear a jaunty scarf?) Are you meant to wear a mask whilst driving a car? Apparently so, and even owners of large utility vehicles driving around scrounging for firewood aren’t exempt from the fines.

The army guys looked really bored at the checkpoint. A little devil on my shoulder whispered into my ear: Who did these guys annoy so that they ended up at this cold winter roadside deployment? It would be unwise to voice such an opinion, if only because after all they have large and powerful guns and know how to use them. The local police seemed nice enough, and it amused me to have an enjoyable chat whilst the cars ahead departed the checkpoint, and the cars behind piled up. The sense of pressure was palpable, but it is nice to meet folks who know what it means to have a lovely chat. And such things should not be rushed.

In such a cold locale as that godforsaken checkpoint, it only seemed an act of kindness to chuck in a bit of entertainment by suggesting to the police that: “Mate! You don’t get a car this dirty by living in the city.” That earned a few chuckles. The facts of course spoke for themselves as the Suzuki dirt mouse was indeed filthy and covered in mud from the simple fact that the editor and I reside in a rural area not subjected to the lock down and unencumbered by asphalt roads.

Compassion is the sympathetic concern for the sufferings or misfortunes of others, and it is needed right now. If the economics of a household mean that the folks have to scrounge for firewood from timber fallen by the side of the road, well they have my support, even if their choice of large utility vehicle looks like an odd economic choice.

Plenty of mates and business associates in the city are locked down tight like a can of sardines waiting to be opened up again. It would be a bit squishy in there with all those sardines, and it makes a person wonder what they’ll find when they do open up the can.

Things are different up here as we’re not in lock down. However, birthday’s have been missed. Significant anniversaries went by. Living in a rural area, at least the local pub is now open with an appropriately socially distanced seating arrangement. We’re often the oldest people in the pub nowadays, whereas we used to be some of the youngest patrons. It makes you wonder if the local retirees investment incomes have dried up or vanished down the toilet where unmentionable things go. Maybe the former clientele of the pub weren’t locals?

We lead a modest existence. There are no large utility vehicles, and the trailer is very old and has been repaired many times. Most of the work done on the farm has the goal of producing as much from the property as we possibly can. We don’t have to scrounge firewood when it is damp in the middle of winter. We stored the stuff away during the summer months when it is dry. But mostly, we just attempt to be self reliant. It is worth noting by way of contrast, that self sufficiency is a fools errand.

Both of us experienced redundancy during the recession in the early 90’s. It is a tough thing to hear that your existence is surplus to societies requirements, but that is what redundancy means. The words “Don’t come Monday”, are not words that you ever want to hear, but plenty of people have probably heard them lately. However, with that known painful experience, you never really trust the narratives which play so big a part in society. There is no over committing, over extending your resources, or even giving yourself entirely over – if only because you’ve known what can happen despite everyones best intentions.

And unsurprisingly, in these times, it is a strategy that has worked well for us, so far.

The weather at this time of year is very changeable. Some days are sunny and very nice despite the cold winter air, and other days the wind howls and the rain drives against the windows in waves. The sunny mornings are often very foggy around here:

We continued cleaning up the surrounding forest which is adjacent to the farm. The fire burned for about three days continuously. Some of the fallen timber displayed scorch marks from the most recent bushfire, which was in January 1983.

It was a mess in the forest, but is now slowly cleaning up. A few months back I read an interesting book on indigenous land management practices by the indigenous author Victor Steffensen. In the book the author made the excellent point that many of the plants in the forests have medicinal uses as well as being food stuffs, and the animals know which plants are which and how they are used. Of course the animals know, it is us humans that don’t! And as we clean up the forest, the herb and vine layer of the forest are enjoying more light and are beginning to grow.

Near to where the fire in the above photo is located, we began the process of constructing a wide path and soil bridge. The area where the soil bridge is set to be constructed has a serious downhill dip.

The soil bridge is being constructed with sods. A sod is basically a square section of grassy soil which we cut out of the ground and then flip upside down. The grass root systems ensure that the soil is very stable. Rocks are then used to retain the sods. The project still requires another days work before it is complete.

In the above photo a black park bench seat can be seen. The path where the seat is located was also widened, but unfortunately for us, we uncovered two large Moby (body) Rocks. The Moby (body) Rocks will have to be drilled and broken apart, but that is a big job for another day/s.

Speaking of rocks, last week a humongous rock was unearthed on the highest garden terrace. The large rock was then rolled downhill to the next and lower terrace where I intend to use it to support the edge of the terrace.

In order to utilise the rock so as to support the edge of the terrace, an even larger hole had to be dug.

The rock was then rolled into the hole. Plans were made regarding the exact positioning of the rock. Unfortunately, the rock had its own and completely different plans. The rock fell into the hole. We then spent half an hour with two 6 foot steel house wrecking bars slowly levering the rock to a more useful position than where it landed.

Near enough ended up being good enough. Well that’s our story because the rock was so heavy we could barely move the thing, and by the end it was not budging.

The rock will provide solidity to the edge of the garden terrace. And eventually the soil to my right in the photo above will be excavated and a shed constructed.

The end of the garden terrace looks pretty good when you are standing on it, and the large and now useful rock can barely be seen poking up out of the ground.

76 thoughts on “We made plans”