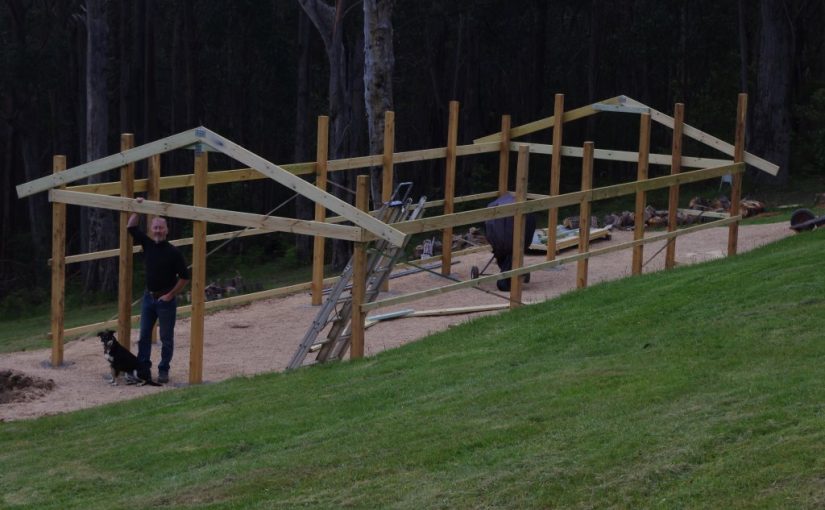 When future historians look back in wonder at these present Titanic days, they might possibly assert that giants once strode the Earth. The future archaeologists will possibly also scour through the incomprehensible remains of our planet spanning civilisation, and wonder how the population of the vast cities were kept fed. I can see the future scene now: the two groups of intelligentsia would meet and converse over a long table in a dark timber panelled, low ceilinged, smoky University pub. And in between testing the relative merits and strengths of the local brews and whilst speaking profundities, they’d come to the inescapable conclusion, that we employed giants to perform day to day miracles!

Whilst those future intelligentsia may be enjoying the finest of local brews and discussing the past – and here I must add that I’d happily, but also impossibly, put those same brews to the test – they’d be wrong. Unfortunately there are no giants among the living today. The decline and slow fall of western civilisation, much like the fall of the Roman Empire, is due to a whole different bunch of factors, and there is no one silver bullet theory, such as a lack of giants. However, it should be noted that such concepts would make for an amusing story to recount over a quiet ale or two.

Over the past decade and then some, I’ve become something of an edible plant and soil nerd, and so my interest in the topic of decline comes at it from that perspective. Plus my interest occasionally provides a safe forum from which to discuss one of my favourite topics of interest, that being: poop.

Not one speck of manure, nor anything else that was once alive goes to waste here. My own poop and urine gets processed through a worm farm before ending up in the soil in the paddock below the house. Late this afternoon, that part of the farm were the worm farm produce ends up was mown, and the ground covers were a rich and heady mixture of plants. Once the mower had vacated the area, the Kookaburra birds flew in to investigate and consume the now exposed yummy critters living in that area.

The quantity and variety of birds living on, or surrounding the farm has been something of a surprise. And all of those birds convert plant materials, frogs, reptiles and insects into bird poop, which in turn quickly gets eaten by the critters living in the soil. In fact there are quite a number of birds which keep a close eye upon the three dogs and their activities. When one of the dogs does their business and decamps from the scene of the crime, the birds swoop in and consume the fresh dog manure. I rarely have to pick up any of the dogs excrement, and it all ends up enriching the soil and thus feeding the plants via the actions of the birds.

By comparison, when you are in the city, and you’re out walking your dog, and it decides to take a big dirty dump, that’s a real problem requiring a small plastic bag. In such circumstances the organic matter has to be bagged up and disposed of in a bin. The bin is then collected by a truck and then carted away and disposed of – plastic bag and all – at a landfill. It’s unfortunate that in such an urban environment there are no birds around to consume the poop, because I note that they do that job for free with no plastic bags involved! And need I mention that the worms, and other soil critters are even less fussy, and they will clean up any remaining detritus.

Cities are kind of like that though, and from an ecological perspective, it’s an utter disaster if only because the minerals inherent in the food brought there, pass through the cities residents before usually ending up in the oceans. And yet, these are exactly the sort of organic materials which are needed to grow the plants which people and livestock consume in the first place. Soils are sadly a finite resource and most soils are not even replete with the many necessary minerals required to grow edible plants.

So how are plants grown nowadays without that rich and heady stream of poop returning back into the same soils? Thanks to industrial scale mining and processing, large scale agriculture can apply all manner of interesting minerals to soils. Heck, even I do that. In the past year I’ve been mixing 24kg (53 pounds) of Agricultural Lime (Calcium Carbonate) to a mixture of about two to three times that weight in coffee grounds, and then applying the mix to the soils in the orchards, every single week. The cost probably shouldn’t be mentioned around the Editor, but the results are nothing short of astounding. And the fruit trees have finally decided after many years to simply just grow really strongly.

And during winter, we mixed up an intriguing batch of about three cubic meters (four cubic yards) of all manner of soil minerals and additives to which we applied liberally to the vegetable beds. Again, the results have been astounding, and the vegetables are now faster growing, they’re hardier to extremes, require less water, and are also a lot larger than in previous seasons.

The results are in, if you want plants to grow really well, you have to add more diverse minerals than simply just whatever compost happens to be available. Who knows what’s in that compost stuff? And therein lies the problem. The super rich mineral concoction, Mono Ammonium Phosphate (MAP) fertiliser, which is heavily used in Australia, and comes from China, will no longer arrive. https://www.abc.net.au/news/rural/2021-10-01/china-expected-to-stop-phosphate-exports/100505026

Australia’s old soils are seriously deficient in phosphate, and so this news is something of a minor disaster for farmers, regardless of scale. I fully expect produce yields to decline as a result of this fertiliser shortage, which means that from an economic perspective, the price for food will most certainly rise.

Unfortunately however there are further complications. In future growing seasons , the already phosphate depleted soils, will only get further depleted because the imported mineral now will be far more expensive due to the short supply. And the consequence will most likely be that the food produced by those same minerally deficient soils will produce food that is probably not all that great for a persons health.

The news media over the past twenty one months seems to have become mildly obsessed with the health subject which dare not be mentioned. The problem is, there are other serious health issues which could well use some air time. I just doubt very much that they’ll get the air time.

The forecast for this week sounded dreadful. The storm clouds have hung low over the farm most days, and the weather has been reasonably cool for this late spring time of year. In reality, despite the thick clouds, the weather was quite pleasant, if on the colder side of expectations.

We’ve set a cracking pace for work on the replacement machinery shed. The project has gone ahead this week in leaps and bounds. The steel cladding was picked up from the supplier, and the sheer weight of the steel resulted in a very slow drive back home to the farm. One of the power wheelbarrows was used to move all of the steel cladding down to the work site. Using machinery saves a bit of hard work, but that does not mean that it is still not hard physical work.

Regular readers will recall that last week the work site looked like a giants pool table. This week most of the timber posts were cemented into the ground. Three timber posts need to be recovered from an existing shed, which we have plans to dismantle over the next week or so.

Another half day resulted in the middle and lower timber rails getting attached to the timber posts. The steel cladding will be attached to these rails. And the angles in all of the timber roof joists were all cut. Two of the roof truss timber arrangements were attached to either end of the shed timber frame.

Phew! That was a lot of work this week. For those readers who were concerned with the plight of the two Kelpie dogs, please rest assured that they’re doing fine and have mostly recovered from the recent surgery. In fact, Ruby was so annoyed by her head cone, she decided to smash it up. It was an impressive feat.