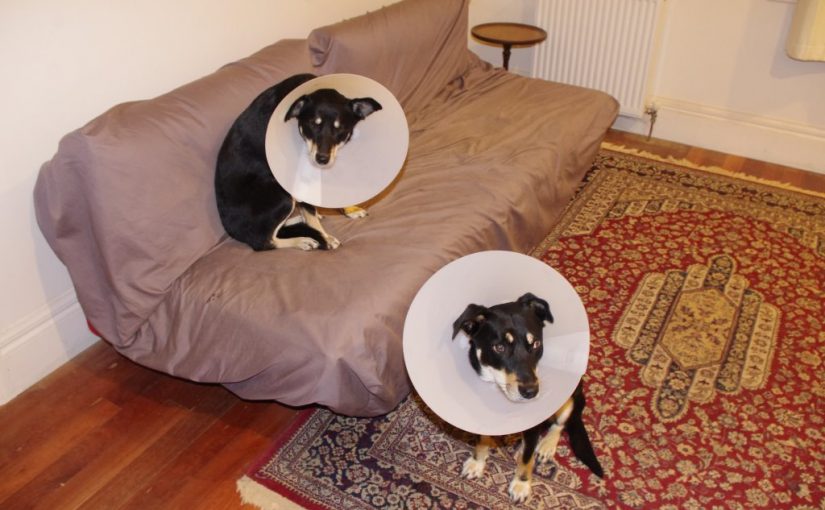 The front door was opened, and just inside the door, a face groggily peered up at me through sad and hurt eyes. Pressed up into the corner, nestled against the wall inside the doorway and not wanting to move a single muscle. Each move represented agony, and she was done. She’d had enough and was no longer even able to freely move.

The following day, we again had to visit the veterinary where the surgeries were performed. Fortunately this time however, there were no dogs with us on the trip. The vet on that occasion required no evidence. Not wanting to waste the journey to the nearby town, we also stopped off at the tip along the way in order to drop off the accumulated metal scraps for recycling.

I’m dubious as to recycling claims, but recycling high grade scrap metal is such a no-brainer, that the ecologically concerned person merely hopes that the recycled stuff does in fact make it back into circulation. Due to the health subject which dares not be named, we’d collected a years worth of scrap metal for recycling. You see, access to the tip had been restricted until only very recently.

On the third and hopefully final trip to the veterinary clinic that week, the back of the Dirt Rat Suzuki was full of scrap metal, but that was at least easily sorted out. Whilst at the tip I noted a family hauling a huge flat screen television out of their rather large vehicle. The friendly staff at the tip stopped the family from chucking the large device into the pit. The family was most likely rather keen to depart the scene, but electronic waste is deposited elsewhere, and rules are rules. Observing the family wanting to rid themselves of their large device, I did wonder to myself whether their present experiences matched up with their expectations when they first purchased the large device?

Anyway, it was the the third trip to the veterinary clinic this week and as I noted before, there was no need to bring either of the Kelpie pups in. You see, we’d already been there late the previous day with Plum. That was because it was Plum who was discovered huddled in a corner just inside the front door, not wanting to move a muscle.

The first trip to the veterinary clinic earlier in the week involved both Plum and Ruby, the two Kelpie pups, receiving a hysterectomy. They are now in recovery from the surgery.

During the first visit to the veterinary clinic, the vet explained to us that there was risk to every single invasive procedure they performed. Low risk it should be stated, does not in fact equate to no risk. Anyway, life is kind of like that and we had to accept the outcome, or there would be no surgery.

For the record, I wasn’t really in any great hurry to get the two pups fixed up. Yet local circumstances altered recently, and the potential puppy baby-mama risk factor went up accordingly. And the other side of that puppy baby-dada risk is candidly not a high quality farm dog. The progeny produced by the potential coupling would have produced a very strange mutant bad attituded canine creature which frankly should not ever see the light of day. So our hand was forced and we decided to act.

And now the two dogs are slowly recovering from their surgery. The surgery went smoothly, however the original head cones provided were of inadequate length for the two Kelpie girls. They have rather elongated snouts combined with long tongues, and so once the pain killers wore off they were both able to lovingly probe their surgical wounds. And with a recovery time of between one and two weeks, and potentially longer, the three days of pain relievers initially provided were, I’d have to suggest, not nearly enough for such an invasive procedure.

It is generally not considered polite to discuss a ladies weight, but in this case we’ll make an exception here because the two Kelpie’s are no ladies. Ruby the boss dog weighs a few kilograms more than Plum, and so she received a higher initial dosage of pain killers for the three days. With Ruby more heavily dosed, Plum was the first to succumb to the pain, and once the pain killers wore off, she went down hard like a sack of spuds – and that was how we discovered her cringing in the corner, unable to move.

Seeing Plum that way and considering the possibility that she may be dying from some sort of unknown internal injury related to the surgery, we rushed her off to the veterinary clinic again (that was the second visit). It was there that we were offered a prolonged course of pain killers at additional cost, and accepted the longer head cone. Plum bounced back almost straight away with the prolonged course of pain killers and she was now gratefully unable to caress her surgical wounds.

Our thoughts and the vet’s thoughts in the matter was that Plum was soft, whilst Ruby was bizarrely super tough. Except that later that night as the heavier initial dose of pain killers wore off, Ruby also went down hard like a sack of spuds. The thing is though, it was about 11pm and whilst we could dose her up using Plum’s pain killers, it was doubtful that we could obtain a replacement longer cone at that time of night to stop her from aggravating her surgical wounds – and you can’t reason with a dog.

The editor and I are pretty handy in a crisis. There may be moments of high tension and the occasional bout of potty mouth, but we get stuff sorted.

It was like that moment in the Tom Hanks film Apollo 13, when the scientists on the ground and the crew out in space realised that if they didn’t get the oxygen scrubber sorted out pretty promptly with the few unusual items available to the crew, things were going to go very badly indeed. So there we were at almost midnight with rolls of duct tape and some chunks of plastic which we had handy. Sorted!

The next day (the third trip to the veterinary clinic), we obtained another course of pain killers at additional cost, but this time for Ruby, and let’s not forget the replacement elongated cone. The lesson we’ve taken away from this experience is that if the recovery time is up to two weeks, then three days of pain killers is probably not nearly good enough. But then it confirms my previously firmly held opinion that you have to take responsibility for your own health outcomes.

And I must say that for the record, the normally high energy dogs are much calmer and more relaxed when they are drugged up to their eyeballs!

Earlier in the week the days were warmer, but as the week progressed the farm descended back into winter. The wood heater has been in use for a few days now. The sunset leading into the changeable bout of winter weather was quite pretty.

Then the rain and cold weather arrived. Fans of solar generated electricity might want to seriously consider the implications of the next two images.

The heavy rainfall made working on the newly excavated site very difficult, what with the clay sticking to everything. So despite the rain we spread three trailer loads of crushed rock with lime over the excavated surface.

Any cut grass is simply left where it falls (chop and drop), and at this time of year it disappears within a week or two. The soil is very active and alive.

Whilst mowing those sections of the farm by push mower, I accidentally ran over one of the drainage pipes. Fortunately we have plans to slightly move this pipe and change that particular drainage arrangement.

Regular readers will recall that there was a large effort earlier in the year which went into fertilising the vegetable row beds. Now that we are in the growing season, I’m beginning to see the results of the effort, and it is astounding.

The above image is of one of my favourite vegetables, the Globe Artichoke. The chokes are now twice as large as they were last year, despite them growing in the same vegetable row beds. And the chokes are very tasty.

The corn seedlings were planted out just prior to the heavy rain, and those have also grown very strongly in only a few days, and that’s despite the cold wet weather.

The garden beds are also coming alive as can be seen in the next photo.