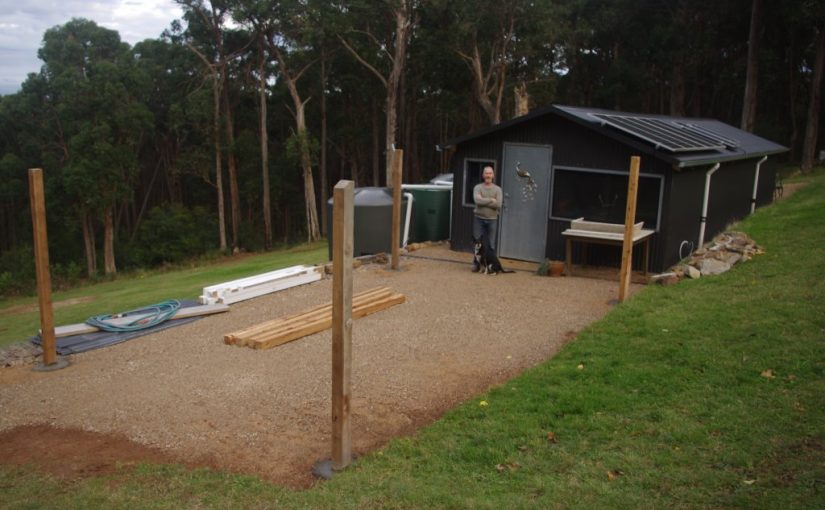 “Self help week’ was how my grandfather called it, thus proving that it was best not to attempt to hit him up for stuff. Every spring he used to take me camping with his WWII buddies, and I loved every minute of it. They’d put me to constant work fetching this and that for them, and I do my best to dodge the work and scamper off and away into the surrounding bush on an adventure.

The camp site was well set up in state forest on small bluff overlooking the Jamieson River. Probably illegal. You should have heard the old fella’s sitting around the fire, a couple of whiskey’s up their bellies, moths dying ’round the gas lantern, the night all around whilst they talked big about what they’d do if the government destroyed the camp site. Make it bigger and better was what they’d do, and did!

Getting away in the bush with the guys for a few days was cool. Home meant a single mother and two older sisters, so I had no idea what guys were meant to do. Talk big, act big was what my grandfather and WWII buddies did. They don’t make them like that any more.

There’s been a lot of whingeing in the news recently about the rise in interest rates on borrowings. It’s a real problem being an over educated working class bloke. Work is an expected and a normal part of life. Free and easy money printing, and near zero interest rates (the cost of money) doesn’t thrill me. Never liked it – sounds like money for nothing. Always there was the sense that a day of reckoning would come, and here we are now, with a lot of whingeing in the media about interest rate rises on borrowings.

Proving that being prudent isn’t rewarded in these carefree economically enlightened days, the lovely lady at the bank earlier this week advised me that they hadn’t increased their interest rates on deposits. We shared an uncomfortable laugh.

My grandfather was born in 1924, and by mid WWII he was old enough to head off and fight. He went off to Europe, and did just that by becoming a bomber pilot. By comparison to that, interest rate rises on borrowings seems like a minor inconvenience and hardly worth a proper whinge.

After visiting the banksters and receiving the hard-to-explain news, some rather ungentlemanly words might have escaped my mouth. Certainly the thoughts were there. However, there had been more than enough whingeing of late, and so I accepted the news with good grace and simply got on with my life. But for some strange reason I began thinking about a certain book: The Catcher in the Rye.

For whatever reason, I was forced to read that book in High School, and I loathed it. For some reason unknown to me, my opinion in this matter is unpopular. Needless to say that in the final exams, I studied hard and was an academic colour-man (having been an A-grade student). The subject of English was not part of that achievement. Nope. Definitely not. And having to read such drivel was probably part of the poor English result.

For those who have never read the book, consider yourself lucky. But for those who have, well, how could they ever forget the protagonist: Holden Caulfied? The narrative followed the entitled Holden over a few days of his life, and boy could he kick up a solid whinge or what? I recall one scene where he reached out to a teacher who was clearly concerned for the kid, and after Holden departed we see into his thought processes where he believes the teacher was gay because of the teacherly concern (I believe the code word was ‘flit’ whatever that meant). Anyway, it seemed like a big call to me. If I could have given Holden a bit of advice it would be this: Whingeing is not sexy mate.

The book to me was one whiny episode after another, and there were times I would have like to have been given the chance to take poor little Holden along to the local Dojo and trounce him. Of course, unlike the entitled Holden who seemed to have plenty of mad cash when needed, I had to work to pay for the fees at the local Dojo.

Money was tight in a single parent household. I got up before dawn most days and did one or two newspaper delivery rounds in order to have enough money to do things like say, pay for fees at the local Dojo.

And unlike Holden, I didn’t expect the adults in my life to provide a great deal of interest in my concerns. Who can forget how cadet camp ended? My school mates and I had spent three days out in the bush roughing it in army fatigues, eating canned and survival food. It was great fun and we even got to shoot .303 rifles at a range! Cool. The school bus dropped us off after the camp, and that was when I realised that nobody was coming to pick me up. All the other kids seemed to have that sorted out, but not my household. Dejectedly I walked to the bus stop in my three day bush stained army fatigues, carrying my standard army issue sausage bag full of camping stuff. I jumped on the bus so as to meet the connecting bus. Got on the connecting bus and eventually made it home. When I got home, I didn’t give them anything, there was no point whingeing about it.

We’ve been sorting out the infrastructure on the farm recently. And just like my grandfather and his WWII buddies, we’re doing the hard yards to make the infrastructure bigger and better. There’s no point whingeing about the work required to achieve that, you know. But when I hear all the whingeing going on around me, I don’t believe that will be the path that the our society is going to take. And I wonder to myself: Did the previous quarter century of easy money mean that little?

Observant readers will note in the above photo that the Dirt Rat Suzuki is very dirty indeed due to the combination of wet weather and very muddy roads.

After another days work the greenhouse corners were pegged out so that the building will be square. Then the four corner posts were cemented into the ground.

Another days work meant that the remaining posts were cemented into the ground, and the true size of the greenhouse could be appreciated!

Sandra and I used the timber supplies to construct the roof trusses, support them, and tie the posts together. We make a virtue of wasting very little timber by joining scrap lengths using nailing plates so as to produce much longer pieces.

By the time night was threatening to take away the light, we had all of the roof trusses installed. There is real beauty in the symmetry of well constructed buildings.

The ongoing war on rats continues. I believe that there is now only a single rat stuck inside the chicken enclosure. For obvious reasons, the rat does not wish to decamp from the land of fresh water and plentiful grains. I have other ideas in this matter and am continuing to slowly modify the chicken enclosure so as to exclude rats. As part of that work I did a massive clean-up of the deep litter mulch in the chicken run, and removed about six or seven wheelbarrow loads of soiled bedding. The mineral rich soiled bedding was used to get soil started in some areas around the farm which were disturbed in the excavations a few weeks ago.

We had our first frost of the season earlier this week. It was cold, and the top of the Dirt Mouse Suzuki froze solid.

Despite the first frost, the leaf change hasn’t quite finished. Drats.

The strange flip-flop between warmer days and colder days combined with the wet weather has meant that mushrooms are growing everywhere. Not much says ‘I’m toxic’ more than a yellow coral imitating mushroom:

57 thoughts on “Bored of the whinge”