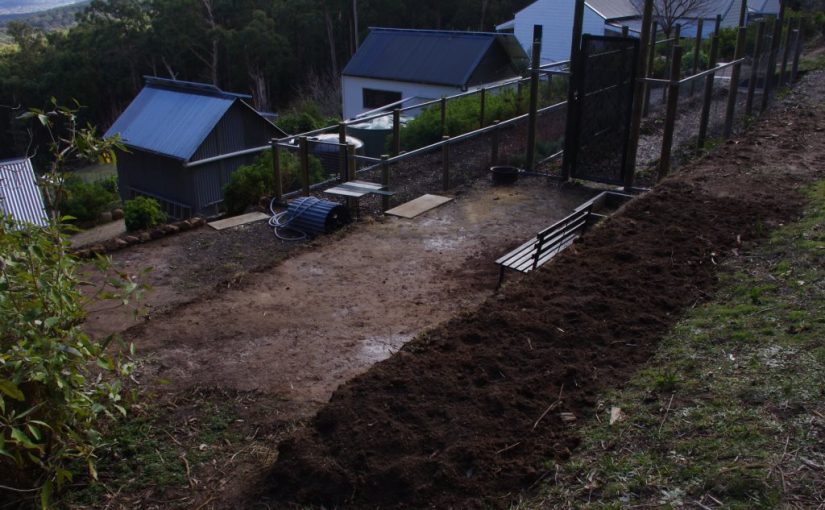 So far this year, the climate in this mountain range has been warmer. If it is going to snow, August is usually the month that snow will happen. But no, it has been warm enough that we haven’t seen any snowfall that lasted more than a minute or two.

The winter here is still relatively cold and the wood fire has been providing comfort and warmth for the fluffy collective. Long term readers who make it all the way to the bottom of each week’s blog entry will note that there has been regular rainfall for much of the year. In fact, looking at the statistics this evening, we are only a few millimetres above the average for this time of year (575mm or 22.7 inches) for the last decade or so.

On more than a few occasions recently, I’ve been told tales of woe about how dry it has been this year. I don’t tend to know how such opinions are formed, because it sure isn’t as dry as it was back in 2008 or 2009. Those years were a shocker for both the combination of extreme heat and lack of the usual regular rainfall.

What the climate here does display is: extreme variability. In practical terms what that means is that I have no idea what the climate will be like from one season to the next. Earlier this year in the summer month of January, we had the second highest January rainfall of recent years, then in February – next to nothing. Clearly, nature provides sometimes, and then not at all at other times in this part of the world.

The continent of Australia has a very variable climate. The state to the north of here of New South Wales (NSW) has now been declared completely in the grip of a very serious drought: NSW Government says entire state in drought, new DPI figures reveal full extent of big dry. The state of Queensland which is further to the north of NSW is also in severe drought. The drought is extensive and horrendous, and you can see for yourself – if you dare – just how bad it is up there: Drought through the eyes of a 16-year-old.

Many long years ago, and back in the days when I lived in the big smoke of inner city Melbourne, I was oblivious of the climate. Of course, I adhered to the official water restrictions during the drought, and duly watched with horror as the daily statistics reporting on the dam levels fell to unprecedented lows. The head of the water authority at the time was heard to mutter something along the lines of: “pray for rain”. It was not a good time. But we did our bit and also used very little electricity, and given that we had a huge array of amenities on our doorstep, we both walked to work and rarely used the car.

But in the end it wasn’t the statistics that brought the drought story back home with a thud. It was the mince meat. Back in those days we used to cook with meat at home, and we purchased our meat at the Queen Victoria Market. Even back then we were tight with money, and so we used to purchase bulk supplies of mince meat from the many butchers operating at the market. And the quality of the mince meat during that drought period was amazing.

All good things come to an end though, and we felt that eventually the quality of the mince meat declined. The thing is, what we hadn’t realised was that the rains had returned, the drought was broken, and farmers were no longer “destocking” their farms. De-stocking is the process of reducing the number of cattle maintained on a farm. Usually the cattle are sold for human or animal consumption. This is a problem because if a drought is wide spread enough, then lots of farmers may be selling cattle all at once, and the prices for cattle get depressed. And feed can also be hard to obtain for farmers at any price: For the first time ever, Dennis has run out of hay for drought-stricken graziers

I have great respect for farmers. It must be heartbreaking to have to sell stock that you have been selectively breeding for decades all because you no longer have enough food or water to even keep them alive, despite the fact that you had in previous years.

You see climate variability means that nature provides sometimes, and then not at all at other times. And every single system I use here that harvests resources from nature works that way. I try really hard to consider how the systems here will cope with the worst conditions, but the truth is I don’t really know until they are put to the test.

The excavations for the extension to the strawberry terrace are now completed. The excavations took a day and a half, and after the first day of digging we were close to completion:

A further three hours of digging on the following day had the job finished. I reckon the new terraces look great, and you can see both terrace extensions looking from above in the next photo:

Observant readers will note that we used some of the soil from the excavations to begin creating another terrace (the patch of very dark soil) above the two new terraces. We reckon that terrace may get dug sometime next year.

The higher of the two terraces (adjacent to the strawberry enclosure) will be used as a corn enclosure. We’re in a bit of a hurry to get that corn enclosure completed because we believe that the seeds may have to be planted next month. To keep this project moving along at a brisk pace, I dug the post holes for the fencing posts.

How cool is the fire screen in the photo above? Can you believe someone threw that out many years ago. I plan to make some minor modifications to the fire screen and convert it into a gate which will be used on the corn enclosure.

Given there will be more plants in that part of the farm, we purchased another water tank to place next to the water tank that is already in that location. Water tanks are made to order items and we got the call on Friday that it was ready to pick up.

The water tank is huge when compared to the dirt rat Suzuki and bright yellow trailer. Surprisingly, it doesn’t hold that much water (4,000 litres / 1,050 gallons). It sure is heavy though.

The area where the tank was going to be positioned had to be excavated so that it is perfectly flat. We then placed a layer of rock crusher dust onto the excavated site.

Then the tank has to be hauled up to that part of the farm. It is heavy work hauling a large and heavy chunk of plastic up a hill. We considered rolling the water tank up the hill, but there is little margin for error using such a gravity defying strategy.

The water tank and rock walls look pretty good. Unfortunately the water tank appears to have some sort of minor leak around the outlet valve (i.e. the bit where the water exits the tank). This is a profound nuisance of a problem, but it is solvable.

All those excavations yielded an impressive collection of rocks. For the past few weeks, the editor and I have been very excited by the sheer volume of rocks that we gained access to during the excavations. Rock walls were built (as can be seen in the photo above), some rock walls were extended (which can’t be seen in the photo above) and one of the rock gabions which had previously been almost empty, have been completely filled. We need to do more excavations to avoid the dreaded Peak Rocks!