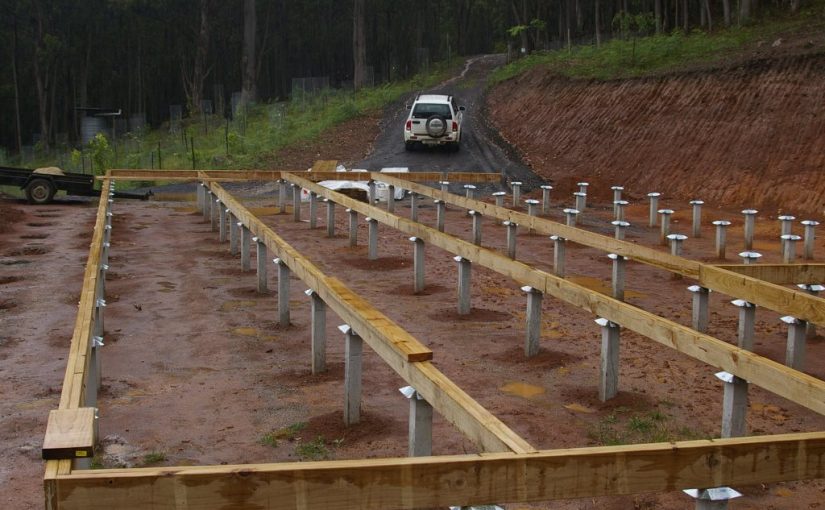 The other day I was uploading old blogs onto this newer blogging website. It was a strange, and uncomfortable experience for me to look back upon the recent past and wonder about those earlier days. I’m not the sort of bloke to dwell upon the past, however looking at those old photos it became clear to me that time waits upon no person.

Whilst my mind was considering the past, I put a spreadsheet together so as to accurately calculate just how many different houses that I’d lived in during my life. Turns out that I’ve lived in 18 different addresses so far. One third of the changes of address related to when I was a child, but when I became an adult, that is when I really let loose and the other two thirds of changes of address occurred. I guess that means that I’m possibly a bit of a nomad.

But then upon further consideration, a thought popped into my head that the permission to build a house on this property had been granted almost a decade ago. Within a month or so of permission being granted, we’d begun construction of the house.

And the editor and I moved into this house almost nine years ago. Back then it was pretty rough living for both of us, but despite the house being far from finished (or even sealed to the external elements), we at least had hot and cold water, somewhere to go to the toilet, a wood heater, and even some lights.

Constructing the house took a long while, that’s for sure. Although people have assured me in the past that completing an owner built house ourselves within 18 months is very fast indeed.

On the other hand, making the land around the house productive has been one of the most extraordinary tasks that I’ve put my mind and back into. And looking back on the photos in those old blogs left me feeling with the uncomfortable feeling as if I’d found a place that I am deeply rooted to. Perhaps I’ve moved on from my old nomadic ways?

When I walk around the property I can look at the land and recall the times that the editor and I sweated away on some difficult task or other placed before us. And yet we overcame the difficulties and wrested order from the chaos. It is a hard feeling to describe, but the farm is almost like a giant productive art project where we get to express ourselves and our desires upon the very land itself.

And you can not escape those feelings. Two years ago, the now sadly deceased Sir Scruffy was assisting us with the excavation of the potato terrace.

This week, we added almost a cubic metre (1.3 cubic yards) of compost into the three round raised garden beds that now sit upon the potato terrace.

What a difference only two years have made on the potato terrace! The steel rock gabions that retain all of the soil for the terrace have now almost tripled in length since the earlier photo above with the charming Sir Scruffy.

And each year, despite time moving on, the farm gets slightly more productive.

In a blog from about one year ago, I spotted a photo of a young Ollie the Australian cuddle dog (whom all intelligent people know is actually an Australian cattle dog) looking down at me from where the corn enclosure is now located. And I’m squatting next to a large pile of rocks (mmm, rocks!) where the dark grey over-flow shed is now located.

The lavender that is planted along the edge of the upper terrace was pruned and fed with compost this week. The dark grey shed referred to in the above photo can be clearly seen.

Publilius Syrus the ancient Latin writer, is quoted as having written the proverb: “A rolling stone gathers no moss”. It is an astute observation, and it was originally intended to refer to people who: “are always moving, with no roots in one place or another, avoid responsibilities and cares.” And I reckon his sentiment is correct because if you put down roots in the land, eventually you form a relationship with the land, and the very land itself takes on meaning to you.

I miss the recently deceased Sir Scruffy the charming, and this week we decided to plant more flowering plants around his grave.

All of the flowering plants in the new garden bed were propagated by us, and we maintain a raised nursery garden bed for propagating new plants (propagating is the fancy name for producing new plants from cuttings of existing plants or from seed). Over the next few months we’ll begin excavating a new terrace above the existing strawberry and vine terrace. And along the the edge of the yet to be excavated terrace, we’ll plant another line of lavender. Rather than buying all of the lavender plants, we’ve begun experiments with propagating them. Turns out that so far that they’re really easy plants to propagate.

Two years ago, we doubled the size of the tomato enclosure.

This year the tomato enclosure has produced good quantities of fruit, berries and vegetables. In the past few days we’ve begun clearing the dead tomato vines, adding compost to the garden beds, and then planting out winter vegetables.

At the far end of the tomato enclosure (which was expanded only two years ago) eggplant, chilli’s and capsicum thrive.

The pumpkin, squash and melon plants were all harvested this week. The vines were mulched up using the lawn mower.

Late autumn is harvest time after all!

We’d never grown the small dark green round squashes before. Note to self: Either cut in half, or make holes in the skin prior to cooking in the oven. One of the squashes exploded in the electric oven!

This morning was something of a baking record. I prepared five bread loaves (two baked today and three to be baked over the next few days) and also a pizza base. I’ve baked bread most days for over a decade now, and I use no fancy machines, and it always surprises me when I hear comments suggesting that baking bread at home is a difficult and time consuming process.

Autumn and spring are the time to make sake (Asian rice wine). It is very good tasting stuff and takes very little effort other than a lot of patience and a bit of care about the temperature that the mix is exposed to.

Observant readers may note that the clearest bottle on the very left hand side of the above photo is ready to consume.

The orchard still produces at this late stage in the season. One of the more interesting crops is the Medlar. There are two options for the consumption of Medlar’s (which cannot be consumed as is, unless you are a brave and hungry cattle dog) and that is either Medlar Jelly, or Medlar Wine. We already have stores of Medlar Jelly which is tasty but with the consistency of Vegemite (those who know, know what I mean by that!) So we have decided this year to produce a tasty Medlar wine. First the fruit has to blet (the fancy name for naturally fermenting the fruit until just before it gets mouldy).

The dreaded leaf change (and associated tourist hordes) is still upon us: