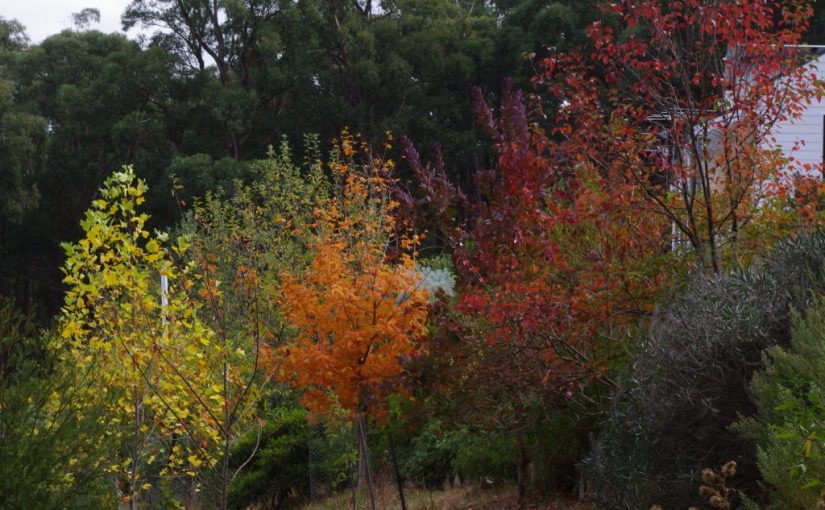 A local bakery provides a delightful lunch consisting of roast pork (or roast lamb) and salad greens in a bun. The bakery has a large selection of cakes too, and I’m quite partial to their Lamington. Occasionally when the editor and I are in the mood for such a lunch, we venture off the farm to the nearby bakery and avail ourselves of a delightful lunch.

Delightful lunches become even more delightful when they are consumed in a scenic picnic spot in the local area. One of my favourite locations for a picnic is a shady spot high up in the mountain range near to where a tuberculosis (TB) sanatorium once stood. In the Victorian era, it was believed that sufferers of the wide spread disease would be better off removed from the general population where they could recuperate in the fresh mountain airs. The survival rate for people contracting the reasonably communicable disease was not good, so anything that could assist the sufferers would be a good thing.

It sure would have been fresh up there back in the day! Winters here are a relatively mild affair with only the occasional snowfall, but back in those days the location was so remote that you may as well have been sending the consumption sufferers to Mars.

Nowadays there is no sign of the sanatorium building other than the lake that was once their water supply. However, the many exotic trees in the gardens surrounding the sanatorium have grown quite large during the intervening years. And that makes the locale a pleasant place for a delightful picnic.

The work sure must have taken a lot of effort and energy because they’ve created a lot of woody mulch. I don’t enjoy spending time now at that once pleasant picnic ground, although maybe that was the point of the exercise. Here is what the picnic ground looked like a few months back:

Strangely enough, the authorities seem to have had some trouble determining which tree was exotic and which wasn’t, because you can see in the photo above a branch from a Monterey Pine (Pinus radiata). And I’m pretty sure the species didn’t grow on the continent before white settlers arrived. Another exception seemed to have been the Douglas Firs (Pseudotsuga menziesii) which were also left standing. There may have been others but I didn’t hang around long enough to find out.

Nature however, is not so easily restrained by a few weeks of felling and chipping. The exotic trees left almost a century worth of seeds and root systems – and it is now all happily growing back.

It all seems like a giant waste of time and energy to me, not to mention that it ruined a perfectly good picnic spot. I am also not sure what type of Eco-tourist would enjoy a delightful picnic surrounded by such destruction.

Long ago I read that the word ‘weed’ has no official standing in the field of botany – the arm of science that relates to plants. The best description of the word ‘weed’ that I have yet seen, was from a Permaculture article which described a weed as a: “plant out of place”. In its most simple terms that can mean that we don’t wish a plant to be growing where it is.

On the farm, the Permaculture definition means that in areas where I’m growing edible plants, I mostly only want to grow plants that I want growing in those areas. There is nothing inherently unusual about my desire either, because humans have been actively managing the landscape on this continent (and probably on other continents as well) for dozens of millennia. It is not lost on me that humans are as much a part of the land as the trees.

Given the length of time that us humans have been mucking around with the landscape, I’d have to suggest that it is quite possible that nobody knows what the composition of the plants should be, or even look like, in any particular area!

I certainly don’t make any such claims about the plants here (exotic or otherwise), and regardless, most of my diet is composed of plants that originated in far distant corners of the planet.

With the plants growing here, I just look around the local area and observe what works and try to implement that. For example, some parts of the forest surrounding the property is in need of a more diverse under-story and so I encourage those plants:

It would be hard for any tree to compete with the Messmate over story trees (Eucalyptus Obliqua) which can grow to 90m / 300ft. Despite that, I have plenty of oak trees grown from seedlings growing all about the farm. The wildlife adore eating the leaves of the oak trees:

However, sometimes nature gets its own ideas and unusual plants can simply turn up of their own accord:

All of the exotic plants here are proven survivors because they have to be to get through such harsh summer conditions (hot and dry this year). Given that everyone seems to be worried about global warming, maybe it is not a bad idea to give some of these hardy exotics more of a chance?

Winter weather is fast approaching and there is no better tell tale sign of this change in climate than a Scritchy dog hiding deep in a bean bag. She stays toasty warm in there!

For some time now one of the very heavy glass sliding doors on the house was getting much harder to open and close. Certainly there were times that I was unable to close the sliding door with only the strength of one arm. With winter fast approaching we decided to remove the door from the frame and find out what was going wrong.

Did I mention that the glass door was crazy heavy? Due to the bushfire construction regulations the glass in the door is 10mm (2/5ths of an inch) toughened glass and it takes two people to lift the door out of the frame. And getting the door out of the frame was a nightmare of a job. In the above photograph you can see that we still have the stainless steel mesh bushfire shutters covering the windows. It has been a very hot and dry summer – record breaking in fact.

Sure enough one of the rollers at the bottom of the sliding door had failed.

Fortunately the windows are standard windows supplied by one of the largest manufacturers of windows in the state, and they had a supply of replacement rollers available for me to pick up from one of their showrooms.

We replaced the faulty roller mechanism and re-installed the door in the frame only to discover that the door still did not slide properly. Frankly, it was a bit of a let down. Not to be deterred, after a bit of investigation we discovered that a minor chunk of plastic at the top of the door had broken and had the effect of putting too much downwards pressure on the roller – which is why it failed in the first place. No doubts I’d broken the plastic when I installed the door over a decade ago! Problem solved and the door slides like a dream now.

We fed and pruned another part of the orchard this week. There is probably about another three days work to complete the job. That job incidentally will require another 3 cubic metres (3.9 cubic yards) of mulch and manure before it is finished.

Observant readers will note that I prune the fruit trees so that they produce a very strong main trunk. The wallabies that live here dictate the pruning arrangements because they break off all of the lower branches.

Triffid alert! The zucchini bed was mostly cleared today in preparation for winter vegetables. There were a few monsters in there…

The winter vegetables have been germinating of their own accord.

Olives are putting on some size too. When the weather cools down more, we plan to move a number of olive trees and plant them in a grid pattern that is more suitable for these plants.

The dread time of leaf change is here. I use the word ‘dread’ because at this time of year the mountain range teems with tourists coming to have a look at the pretty trees.