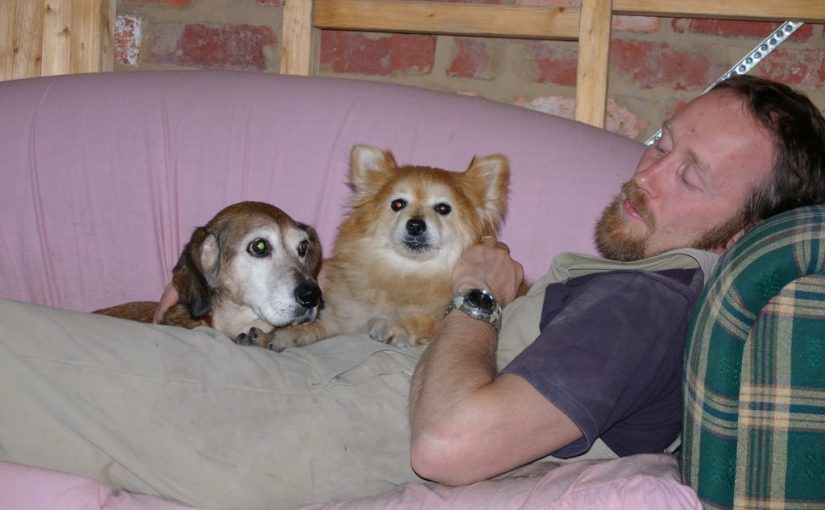 I was looking at old photos this evening and the above photo leapt into my awareness. It was from 15 years ago and not only did I wear a watch in those days, I was also sound asleep whilst the old boss dog, The Fat (a Dorgi which is a Dachshund – Corgi cross) and The Fluff (the Pomeranian and yet to become boss dog) looked at me with concern at my lack of alertness. They were fine and outstanding dogs and I was glad to have known them.

Well, the dogs should have been concerned because I was actually tired. I’d laid every recycled old red brick in the neat brick wall in the above photo behind me, and also constructed the neat timber frame which would eventually hold the insulation and plaster finish. Of course as is expected, there was another brick wall on the other side of the room. And I’m assuming that the roof had been covered over, otherwise I wouldn’t be sleeping upon the green couch, which incidentally sits behind me right now as I type this. However, this evening, Ollie the Australian cuddle dog (every right thinking person knows that he is an Australian cattle dog) is sound asleep on the green couch after a long day of running around the farm. I did a lot of digging today, but I don’t feel so tired these days.

Anyway the photo was from the mid-noughties (2005) as they are now called. And when I bought that particular house, which was only 4km (2.5 miles) from the city centre, five years before the photo, it cost about three years of my salary. The editor also worked and so the house cost far less than three years of our combined salary.

Of course at the time, purchasing the house was a very unfashionable choice. Not only was it the worst house (structurally sound by otherwise un-liveable) in an otherwise OK street, none of my friends lived in the area. And the area was full of people who were old enough to be parents of the baby boomers or they were younger and outright eccentric. One of the neighbours had a penchant for very large military vehicles which he parked on the street. The vehicles had massive ground clearances, and implied the sort of serious ‘go-anywhere’ look that people who may be concerned about an impending zombie apocalypse could truly appreciate.

Back in the very late 1990’s when grunge music by then was so passé, we bought and moved to that house because we could see that house prices were rising, and if we didn’t make the move then, there was a real possibility that we would never be able to make it.

And at that time (and earlier) governments around the world continued with their programs of deficit spending (i.e. spending more than they brought in with taxes and borrowing to make up the difference), so the money supplies around the globe began to groan and expand. One fascinating side effect was that house prices in Australia began to inexorably rise. I watched the financial spectacle with a sort of horrified fascination as house prices continued to rise and then rise some more. It should be remembered that for some people a rise in house prices is inflation, but for others it’s a form of mad cash whilst doing absolutely nothing of note.

By the time that the 2008 Global Financial Crisis / Great Recession rolled around, I’d already decided (completely unrelated to the financial ructions) to do something different with my life, and so we sold up and moved up to the country and began the process of building this house using our own labour. Again it was an unfashionable choice, but because we kept the house small it was achievable.

Small houses are a bit of a thing these days. However, when I look at the suburbs I don’t see small houses, I see house after house, of the same story. That being the largest possible house on the smallest possible land size. Not a choice that I would make myself, but I make unfashionable choices.

On the other hand, a lot of people seem to acquaint small houses with the tiny house movement. Tiny houses are small living spaces constructed on trailers so that they can be easily relocated. I may not be cool, but Tiny houses are pretty cool. And I’ve recently been thinking to myself that they are a way of providing a form of “poverty with flair”, because in less glamorous and far less polished forms, such caravan dwellings inhabit trailer/caravan parks. Sometimes with an annex attached to the side for extra living space.

As long term readers know, we grow a lot of fruit, vegetables and berries for our consumption. And each year we grow more of them. I’ve encountered plenty of folks over the years who happily remind me that such an act is considered to be the activity of a poverty stricken individual. That story also gets reinforced regularly in the newspapers as the neo-hippies growing vegetables in the articles always look to me like some sort of sad morality tale. It is never presented as an empowering thing for a person to do.

But the times they are changing and economics bites. Some forms of poverty with flair are being up-sold, and I for one have noticed car sharing services in the big smoke. I guess what they are suggesting is that even though you might not be able to afford a car of your own, you can simply rent one on a time-share basis. Not a bad idea at all. And there is a very large business that rents high end clothes, so that (I’m assuming) folks who can’t or may not be able to afford them, can still wear them. Nice one. Even the ongoing stoush about Veganism appears to be a way of making the consumption of vegetables and grains out to be a subversive act. Getting people to eat more vegetables is a good cause, although with all of the media beat-up on vegans I do feel sorry for long term vegans who have had their diet choices hijacked and politicised.

Where is it going long term? I don’t really know, but one aspect of those possibilities that interests me is that they are mostly subject to intermediation (the fancy term which describes somebody enjoying a financial cut of the action). For example, you can own a tiny house, but the laws are such that you can’t just plonk the tiny house anywhere you like, and you still end up with all of the costs of running a household. The cars and clothes, well someone is enjoying a cut of that action. You could probably save a whole bunch of mad cash consuming a vegan diet, but if you spend a lot of effort and ingredients making your vegetables look like meat, it may end being more expensive than actually eating meat.

The alternative is, I guess, making some unfashionable choices.

The season abruptly changed this week and the rains returned. One night I lay in bed listening to heavy rain thrumming on the roof of the house. The house is very well insulated so if you can hear rain, you know it is heavy. I should have gotten up in the middle of the night and cleared the filters for the water tanks. But instead I lay in bed warm and cozy, and most importantly dry, pretending not to notice the heavy rain! I suspect some of the water over flowed the tanks because the next day the water filters had collected a lot of gunk (the technical name for unidentified organic matter) and they had to be cleared out.

The return of the rain meant that we were able to begin excavations to extend the corn enclosure. The rain promotes the growth of the grass, and we use clumps of grass turned upside down to reinforce the very edges of garden terraces. It works much like sand bags.

A lot of large rocks were excavated during the two days of digging!

And some of the rocks were so large and of such a good shape that we moved them elsewhere and kept them aside for a future project. It is really hard and heavy work moving these rock monsters!

Small rocks were so plentiful in the dig that we have almost filled up one of the steel rock gabions.

We’re about halfway through the job of excavating another 11 foot of garden space for the corn enclosure. All being well, that should allow us to plant about 200 corn plants in the enclosure, plus a couple of miniature kiwi fruit. We also decided to construct a path leading away from the enclosure to a sloping ramp for future wheel barrow access.

We even managed to use many of the larger rocks to construct part of a rock wall around the upper and lower edges of the path.

Observant readers will note on the right hand side in the above photo the large amount of soil between the end of the rock wall and the timber post that has yet to be excavated.

We also purchased an Irish strawberry tree as well as many varieties of flowers to plant in the new garden beds that we’ve created.

As winter fast approaches, the days are getting shorter and colder. The frogs led a rousing croaky cheer when the rain returned, but because of the cold weather there aren’t that many insects around any more. The large Bogong moths are an exception and the lights from the house draw them here at night.

Dozens of rhubarb plants grow here, and they even self-seed (volunteer plants). I enjoy the taste of rhubarb as an addition to breakfast, but I much prefer the plant converted into wine. We started four 5L (1.3 gallon) demijohns of rhubarb wine this week.

58 thoughts on “Poverty with flair”