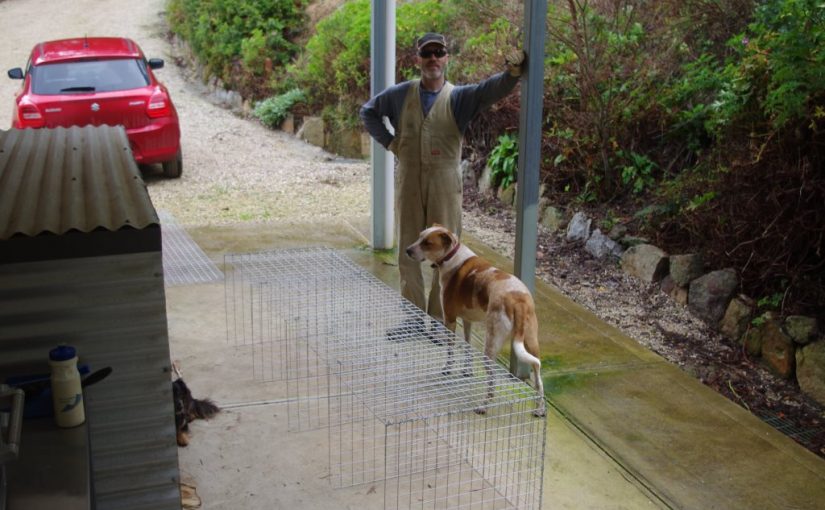 Our hero Sitting Duck, the cadet reporter, is no longer sitting because he has just been brusquely dismissed by the economic theorist Truman the Turkey. Sitting Duck has been sent by Truman to seek out Roasted the Sheep.

The look of stink-eye that Truman Turkey gave our intrepid cadet reporter implied that: ‘we’re done here’, without actually saying that. Sitting Duck realised that there was no further use in pestering Truman the Turkey. He pondered what to do for a moment. And then he pondered the problem for a few more moments before deciding that he had no better idea. So, with only the briefest of notes to hand, and certainly not enough to impress his Editor at the ‘The Big Swine’, he decided to set off in search of Roasted the Sheep.

It was at that point that Sitting Duck realised what a big property Utopia Farms was. With his trusty clipboard safely held in his left foot and pen held in the right foot, he flew up into the air so as to get a birds eye view of the property. Sitting Duck saw sheep everywhere, but which one was Roasted the Sheep? Fortunately he spotted a young stallion with his head held proudly high. From a distance, the horse looked as though he knew his business.

Sitting Duck headed to the paddock with the stallion, and proceeded to fly around until he could grab the attention of the self absorbed horse. “Who are you? And what are you doing here?” Demanded the proud young horse.

“I’m Sitting Duck, and I’m also a reporter from the ‘The Big Swine’. Pleased to make your acquaintance, and you look like an important horse.”

“Thank you for noticing. And yes I am an important Stallion of noble lineage. And I’ve earned a degree in agricultural science with a major in ploughing and hauling! I’m no lightweight horse. My name is Basashi. Anyway, you haven’t answered my question. What are you doing here?”

“Why didn’t you say so earlier?” Thundered the proud and educated Stallion.

“Well, I was a bit flustered because it is not every day that I get to speak with a horse that has an agricultural degree with a major in ploughing and hauling. Respect. I was actually looking for Roasted the Sheep, and was wondering if you could point me in the right direction? But um, now that I’m here, I’d like to ask you the question: What is your take on the new economic theory?” Inquired Sitting Duck.

“I hear you and it’s no good at all. I also have and undergraduate arts degree,  and I had to get a student loan to pay for it, so yeah I hear you bro. I assume you had to go into debt to get your technical degree?” Asked Sitting Duck.

“Are you being smart with me? That wasn’t debt, that was a student loan. It’s an entirely different thing and not the same at all. Hey, what are you writing there anyway?” Replied Basashi the Horse.

“Err. Nothing, just some notes about how your mane is wafting supremely in the breeze. So err, let’s get back to economics. Just say theoretically, you need some extra grain scrip from Big Pig in order to take that mare over there in that paddock out on a date. What do you do?” Sitting Duck searchingly asked the young stallion whilst using his wing to point at a distant paddock.

Basashi the Horse looks thoughtfully over at the fine looking mare in the distant paddock and gets momentarily lost in thought of quiet candle lit dinner for two. “Easy. I’d just use After-lunch”.

Sitting Duck wasn’t quite sure he’d heard the horse correctly, and so he queried: “Did you say After-lunch?”

“Yes. After-lunch. It works like this: If I need extra grain scrip for the hot date with that mare of there, I simply go see Big Pig who keeps a record of pay-day advances, and then he deducts the amount advanced from future pays. Easy. I do the ploughing and hauling, get the hot date, and he does the whole messy grain scrip business. Everyone wins.” Enthuses Basashi the Horse, who’s eyes are still dreamy as he considers the possibilities of a date with the hot mare in the distant paddock.

Notes: Basashi the Horse. Enjoys dates with hot mare courtesy of grain scrip system: After-lunch financing system. Could it be as good as it sounds?

Sitting Duck likewise was on a mental flight of fancy at the thought of After-lunch and dates with hot hens, when troubling winds disturbed his joy. “What happens if you don’t earn enough to meet the regular deduction from future pays?” Sitting Duck searchingly asked.

“Oh that. Well, it’s happened to me plenty of times before, and all I do is pay Big Pig a bit extra out of my future pays to make up for it. He’s a nice bloke that Big Pig and he works it all out for me.” Replied Basashi the Horse.

Before Sitting Duck knew what he was saying, he blurted out: “Isn’t that debt and interest repayments?”

Well Basashi the Horse sure got riled up this time, and flecks of foam were forming at the corners of his mouth as he spat out: “Do you have to be such a buzz-kill duck dude? I told you before I don’t do debt. After-lunch isn’t debt, it’s an advance. It’s an entirely different thing, and not the same at all. Look buddy, do me a favour and get lost.”

Sitting Duck realised that he was indeed a sitting duck as the young Stallion reared up in anger. As he prepared to make a hasty getaway from the now angry horse, he remarked: “Sorry to bring you down mate. Can you point me in the direction of Roasted the Sheep?”

Basashi the Horse suddenly thought better of squashing the fleet footed duck, if  only because it would have made him look bad in the article, and instead he lifted a hoof and pointed in the direction of a distant paddock with several sheep grazing. Sitting duck again took to the air in search of Roasted the Sheep.

Postscript Notes: Basashi the Horse. Possible inability to comply with “After-lunch” system produces a feisty reaction from horse. Maybe date with hot mare did not go so well? Might not be as good a system as it seems.

It was another cloudy old winter week over the farm. So far the winter has been remarkably mild and damp. Such weather causes people in rural areas to begin burning off excess forest organic material (branches, leaves, sticks etc.) Sunday’s seem to be the day that happens and this past Sunday was no exception. A property owner in the valley immediately below the far set off an epic burn off which I could smell here. Better now than high summer.

With the rain arriving in waves, we decided to construct another steel rock gabion cage. Ollie the Australian cuddle (err, sorry cattle) dog assisted with his mate Toothy.

Soon the cage was completed, set in place and even had a few rocks chucked in it.

Despite the rain we did another long days digging and moving clay and soil on the new garden terraces project. The project has turned out far bigger than we had first imagined it to be, and we estimate that there are about three to four days of digging left to go. Epic! All of the clay is excavated with the assistance of an electric solar powered jackhammer and then moved using hand tools .

Near to where I am standing in the above photo, we have begun constructing a concrete staircase leading from the lower to the higher garden terrace. Three steps have been constructed so far. The winter weather means that the cement is very slow to dry. Ollie would like nothing better than to stomp his footprints in the wet cement.

For many years now a bunch of lovely Samoan folk who run a tree business, turn up at the farm and assist me with the trees. I’ve known them for years, and they know trees far better than I do. A large 30m / 100ft dead tree had shifted and become caught up in another even larger tree. It was a bit of a problem as the dead tree could fall at any time and without warning, and it would most likely kill you if it fell on your head (or anywhere else for that matter). The Tree Dudes (as I call the Samoan folk) sorted the dead tree out in no time at all and cut it up into firewood lengths.

Speaking of Ollie we took him again on the long rail trail three hour walk (12km / 7.5miles). Later that night, Ollie was so exhausted that he fell asleep and the naughty Scritchy the Boss dog decided to out-alpha him by sleeping on his head.

After many years of making my own yoghurt, I have now had two failed batches in as many months. The batches of yoghurt set well, but they were contaminated with Acetobacterium which produces the chemical acetone which does not smell nice at all. I purchase good quality organic milk, but clearly something has changed with the milk possibly between the pasteurising and bottling or storing/distribution process. I now pasteurise the milk for 1 hour at 65’C / 149’F before adding my yoghurt culture. After the first incidence of this bacterial problem, I decided to keep a backup culture in the freezer. It was very fortunate that I had done so, because I was able to use the backup culture to produce a new uncontaminated batch (and replace the used backup culture in the freezer).

At this time of year, the parrots get hungry and they are forever hanging around the chicken enclosure feasting upon seeds in the chickens used bedding straw which is distributed as a fertiliser.

The ongoing mild damp weather has produced an amazingly diverse collection of fungi. I spotted this fungi the other day: