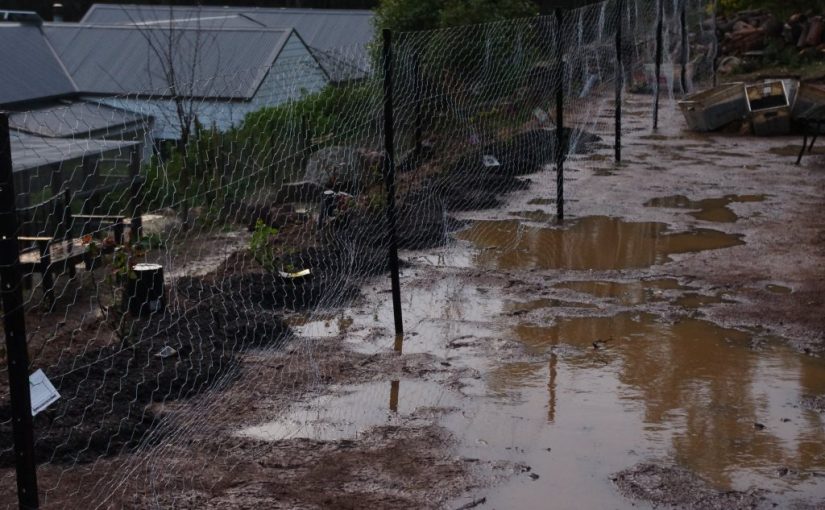 The gripping conclusion to Modern Grain Theory has to wait for another week. (Editor says ‘wrap it up, it’s getting old’)

Regular readers will recall that for obvious, and mostly weather related reasons, the blog last week focused on snow and winter rain. During such weather conditions, it is very hard to work outside. And just in case you missed last weeks blog, the snow was epic. This is what the snow on the solar panels on the roof of the cantina shed in the courtyard looked like.

Needless to say, solar photovoltaic panels produce no energy at all when covered in snow, despite peoples crazy beliefs. Leading up to the snow, the farm had enjoyed three continuous days of very wet and very cloudy weather. The solar panels barely produced much power during those cloudy days either, so I decided that it was a good opportunity to test out my new petrol (gasoline) powered battery charger arrangement.

The battery charging arrangement works very well, but it is not lost on me that it is an extraordinarily expensive way to produce electricity. I recall long ago when I lived in the city, being outraged at the connection charges for water. My thinking during those urban days went along the line that: As a household, we used very little water per day, especially when compared to the average household, so the $200 per quarter connection fee was a bit of an outrage.

My outrage at the quarterly connection charge was an act of hubris, because in these enlightened times, I now know that with no services at all connected to the house, a years worth of urban water connection charges would be just enough to cover the cost of a 4,000 litre / 1,050 gallon water tank (excluding delivery costs). Nope, I now know that them city folks are enjoying some very cheap infrastructure.

But anyway, last week the snow was heavy and the rain was persistent for days. Those sorts of weather conditions are not conducive to getting outside and doing serious work, so we didn’t do anything. At the end of the previous week before the snow and rain, the new garden terraces (upper and lower terraces) project looked like this:

In between the snow and the thick clouds and heavy rain, the sun has occasionally shone and the UV is now moderate (up from low). The sheer variability of this winter has confused my senses, but I’m not alone because the plants are likewise confused. Earlier today I noticed that the many almond trees have begun producing leaves. Little do they know that snow is predicted to again fall to 400m  / 1,320ft above sea level early tomorrow morning (Monday morning).

Almonds are a very early fruit tree. Rather than being a true nut, almonds are actually a variety of peach. Almonds produce blossoms at a time when the only insect pollinator flying about is the European honey bee (bummer about the perilous state of the European honey bee. Sucks to be an almond tree). I have a bee hive, but after many years of working with the bees I’ve acknowledged that they know their insect business better than I do, and we seem to have arrived at some sort of acknowledgement of mutual interests. That means that I don’t pester them and they don’t sting me – and everyone is happy.

This week brought a break in the winter weather for a few days. The editor and I set ourselves the goal of completing the upper new garden terrace this week. We didn’t achieve that goal, but we sure got close to achieving it. Two days of digging, moving and compacting soil on the upper terrace produced this result.

Not a bad effort at all if I may say so. During the excavations we unearthed an unfeasible quantity of small rocks. We’re using those small rocks to fill a steel rock gabion cage (and as fill in concrete steps).

However, not all of the rocks that we unearthed were small. Some of them were true behemoths and we’re using those to construct a rock wall on a path leading away from the lower terrace. The rocks are excavated using an electric jackhammer and hand tools. And the rocks excavated this week were at the upper limit as to what we can handle and move.

Also for the first time in a very long while, during the excavations on the upper terrace, we unearthed the remains of an old tree stump. The tree stump will have to be ground out during a future week.

Despite not quite finishing the upper garden terrace, we were very chuffed at how it now looks. The project has moved a long way from where it was only two weeks ago:

Observant readers will note that there is a rock in the middle of the highest concrete step. The rock was not meant to be there, and the not-yet-dry surface of the step was marked by the rock which had inadvertently blown there in a strong gust of wind overnight.

The reason for the haste with the upper garden terrace is that on the downhill side of the terrace we intend to plant a long row of roses. Like the almonds, the roses are also beginning to produce leaves (and a flower!) and so we wanted to get the roses in the ground on the upper terrace as soon as possible.

Roses, like most plants usually have to be planted in holes in the ground, so early Sunday morning I began digging holes for the many roses. When digging holes I sometimes use a hand auger.

The upper garden terrace is quite long and as such it can contain quite a lot of roses. Unfortunately, that also meant that I had to dig a lot of holes!

Before all of the roses were planted, the heavens opened and about 17mm / 0.7 inches of rain fell. There was water everywhere, and we retreated into the house where the wood fire was keeping the place toasty warm.

There was no need to ‘water in’ the new plants because nature had done the job for us for free!

Just before the rain hit, we could see the band of heavy rainfall sweeping in over the valley below the farm, and so we had to rush to put a temporary cover over the slowly drying rock-marked concrete step leading up from the new lower terrace to the upper terrace. At this wintry time of year it takes about two days for a cement step to dry into walk-able concrete.

A trailer load of 1 cubic metre / 1.3 cubic yards of compost was brought back to the farm so that it could be used to fertilise the new rose plantings. Long term readers may recall the curse of Cherokee, which is the unfortunate situation where we bring back a huge load of organic materials (usually at my instance) and then something awful and unexpected happens, like Sunday afternoons heavy rainfall, and the trailer is left full of undistributed organic matter. Of course, wiser and cooler heads (e.g. the editors) suggested at the time of purchase that we only bring back half a trailers worth. However, unwise heads such as myself suggested that we could always use the organic matter elsewhere and breezily dismissed the wiser path. Well woe is me, because in this instance I was wrong and the bright yellow steel trailer is now half full of very damp compost. Promises for better decision making in future have now been made…

Still, we used some of the compost to fertilise the garden beds in the corn enclosure:

The remainder of the trailer load of compost will hopefully end up in the corn enclosure over the next few days (if the weather holds).

Anyway, it wasn’t just me that was grateful when Sunday’s rainfall ceased. I spotted Big Daddy wombat cruising through the orchard once the rain had stopped. Wombats are very sensible creatures, and they wait out the rain (just like hobbits) in their toasty dry underground burrows.

I noticed that one or two of the non deciduous fruit trees lost their leaves and most likely because of last weeks heavy snowfall. However, fruit trees are reasonably hardy and when the sun shines, they rapidly recover lost growth.