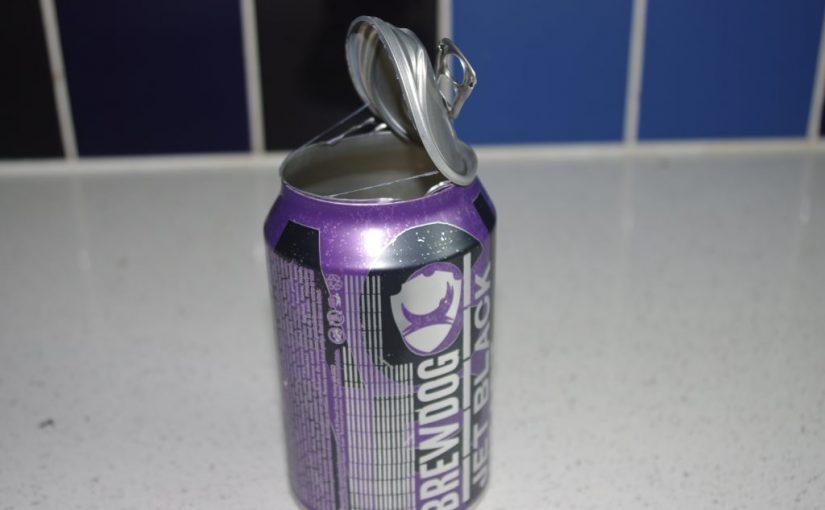 The scent of Eucalyptus oil is a powerful memory for me. On hot days just outside the front door of the house, the heady aroma of the local forest can be a beautiful thing. But like certain forms of beauty, the aroma can also hold terror.

I haven’t always been a country bumpkin who enjoys days spent in the quietude of the tall Eucalyptus forests. Once upon a time I was an inner city slicker. Back then I talked a ‘big game’ about my sustainable and environmental values, but it was mostly talk. Although in those days the editor and I did walk a lot. We walked to the city to work, walked to the supermarket, walked to restaurants, and most importantly walked to the local cafe for superb coffee and fresh oven baked muffins. Yum!

At the end of the street that we lived on, there was even railway station, the tracks of which ran alongside the local creek. The water in the local creek flowed all year around and on a hot summers day it was a pleasant place to take the dogs for a walk in the shade. In the 1970’s volunteers had turned vast lengths of the local creek from an industrial dump into a lush wildlife corridor, and the editor and I enjoyed the benefits of all of their hard work. The scent of Eucalyptus oil emanating from the native trees alongside the local creek could be smelled there too.

It was an old inner suburb of Melbourne, having been mostly laid out and constructed in the property boom of the 1880’s to 1890’s. The property boom in the area eventually fizzled out in the 1890’s, and an epic recession kicked in, but the small houses with the wide tree lined streets remained. More importantly, other parts of the suburb contained large public gardens / parks and they were planted with many exotic oaks and elms. Today the parks look stunning cool and shady places and they are well cared for. It’s a nice place to be.

The workers cottages and rows of Victorian era terraces in the inner urban area were all small houses on tiny footprints of land. I like small houses, if only because they require less cleaning. But then the Editor, Ollie, Toothy and Scritchy likewise enjoy living in a small house. It is a nice feeling to be able to know when you have enough house.

Of course some people never seem to understand when they have enough. Long term readers will know that I’m a fan of the television series Grand Designs UK. Nowadays, it is the only television show that I’ll watch. And I’ve been watching the show long enough that I was a young bloke when it first aired two decades ago. However time moves on and like the cheeky presenter of the show, I also seem to have misplaced my ring of power that grants perpetual youth.

I know a thing or two about houses, and the editor and I constructed this small house using our own labour, only sub contracting the plumbing, mains electrical and excavation work. So in this seasons Grand Designs UK, it was traumatic for the editor and I to watch the cautionary tales of others. Two couples in particulare were a stand out as they apparently ended up in divorce. All the way through those two episodes, and for a while afterwards, I asked myself the question: Why did they attempt to construct such a huge house given the extreme personal costs? And I couldn’t find any meaningful answer to the question.

I’ve noticed that other people like to talk about sustainability, whilst sharing their concerns about environmental degradation. However, when I look around at the cities built landscape, it is clear to me that the newer areas (and the modifications to the older areas) were never intended to be sustainable and/or environmentally sensitive. The facts speak for themselves, because if either of those goals were foremost, the built landscape would look entirely different, and it could possibly even resemble the suburbs constructed in the 1880’s to 1890’s when people used far less energy and stuff, and produced far less waste.

It is a bit of a problem, but I tend to feel that what will be, will be, Que Sera, Sera. Anyway worrying about such concerns is not a useful activity, because it is simply another form of inactivity. But then you can have extreme weather like what I’ve just experienced this past week, and it is hard not to be concerned.

For those who might not be aware, Australia smashed it’s December heat records two days this week, and may even have pulled a hat trick. Well done us! More records tumble as heatwave rolls on, scientists point finger at climate change. The average temperature when measured across the entire continent hit 41.9C / 107’F on Wednesday and 40.7C / 105’F on Tuesday. And Thursday and Friday were no slouches either.

Friday morning, when I dared poke my nose out the front door, I could smell the heat, which had produced the heady scent of Eucalyptus oil, but also the waft of thick smoke from the epic bushfires which continue to burn in the states to the north and west of this state. It sure makes a person wonder if all those big things that people want are worth the hassle?

Friday was as hot as I’ve seen here, but no doubts the future will be even more challenging. The house is heavily insulated against the heat and cold, but even so, by midnight, the inside temperature in the house reached 30’C / 86’F, which was still cooler than outside. For those that are interested in numbers, here are a couple of photos from the weather station during the day. The upper left hand side of the screen (the blue corner) is the outside temperature in Celsius, whilst the upper right hand side (the yellow corner) is the inside air temperature, again in Celsius. 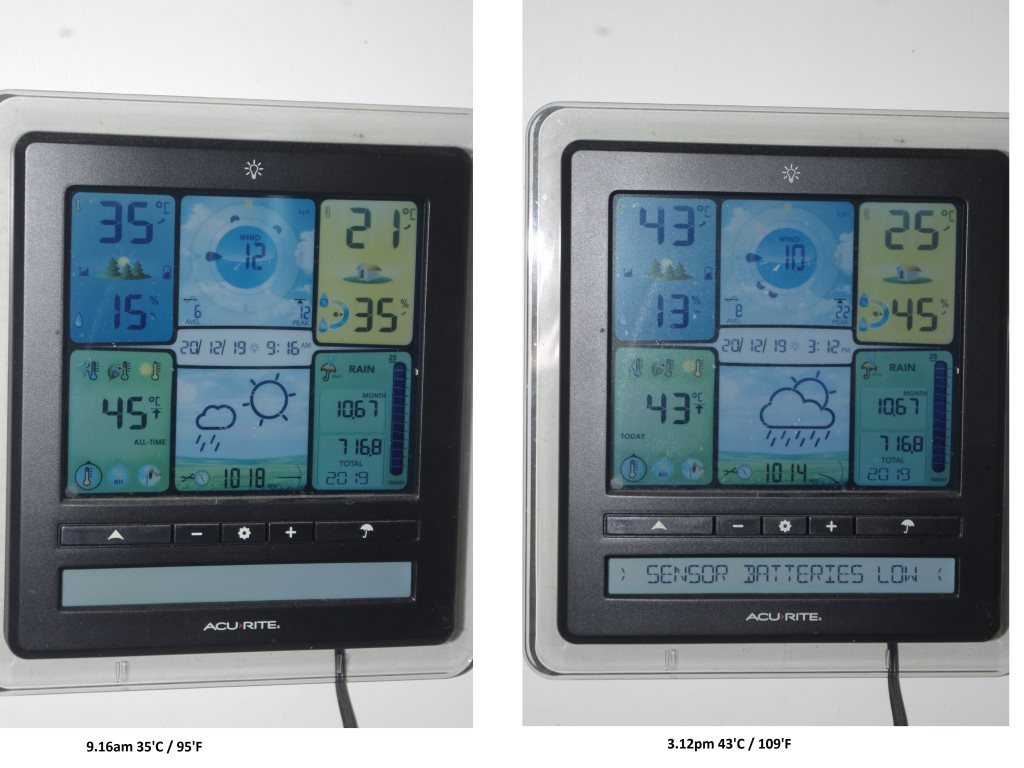 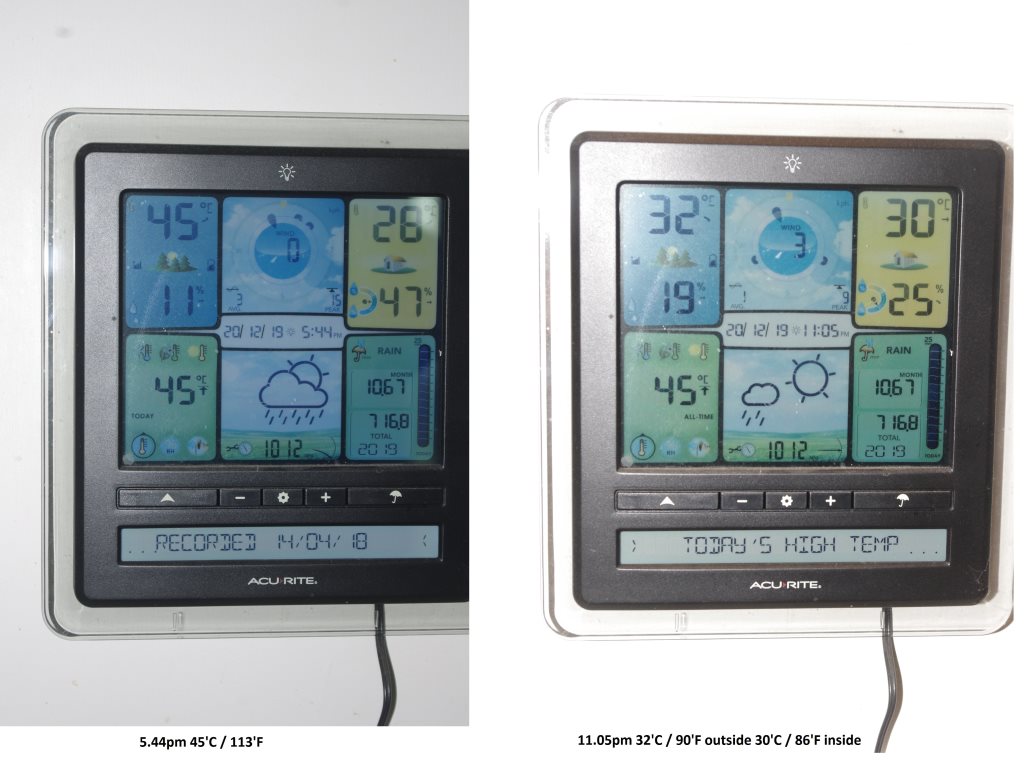 It sure was a hot day. At one point a can of beer in a cupboard exploded and left a heck of a mess to clean up. I suspect that the heat gave just enough energy to the yeast living inside the can to begin fermenting the sugars in the brew.

All summer long, I leave water out for the various critters that also live on the farm, although I’m not sure how much they enjoyed drinking sun heated water on that day, but it was probably better than nothing at all, and certainly it would be better than warm exploded dark ale.

Usually I have no major issues with the birds which also live on the farm. Every now and then, they over do things and harvest too much of a particular fruit, but mostly they’re OK. However, the strawberries are an exception and they are enitrely off limits to the birds. Before constructing the steel cage which houses the tasty sun ripened strawberries and grape vines, the birds took all of the strawberries. And every other critter living here (even the Fluffy canine collective) devoured the remaining few strawberries that the birds missed (no doubts they were probably full up to their eye balls). We just didn’t get any strawberries.

Earlier in the week, a small blackbird (an invasive species) had worked out how to get into the strawberry enclosure. I felt like Dirty Harry when I dealt to the bird, but the strawberries are off limits. And the bird was teaching other birds how to break into the enclosure. We modified the enclosure and added steel rails along the very bottom of the enclosure. It was a very fiddly job, but was eventually completed.

Since the two steel rails have been in place, we have begun to harvest strawberries again.

A few months ago we purchased a low centre of gravity mower that is suitable for the steep slope that the farm is on. Originally I was hoping to use the mower to bring large rocks back up the hill, but alas it does not have enough grunt to do the job. On the other hand it is an amazing, and more importantly safe mower and has saved us an extraordinary amount of time.

That still left use with the problem of bringing large rocks back up the hill. For a while we were considering leaving the rocks at the bottom of the paddock, but then I received an offer too good to refuse. A machinery company who I’d dealt with for many years were clearing their stock and offered me a powered wheelbarrow for half price. It was an offer too good to refuse.

For the moment, the dreaded moment of peak rocks may have been defeated. Unfortunately, these wins are only ever short term.

Another cement stair leading up to the very upper garden terrace was completed this week. The next photo shows the wet cement drying in the timber formwork.

The extreme hot weather has caused the soil to rapidly warm on the garden terrace project, and the tomatoes, eggplants, capsicum and globe artichokes have grown amazingly this week.

The cucumbers have been very slow growing this season:

However the zucchini (courgettes) have put on masses of growth in the hot weather:

The Leeks have produced beautiful flowers:

And just because the fluffies were absent from all previous photos:

Onto the flowers (all of the below photos were taken after the heat wave which shows just how hardy they are):

60 thoughts on “Compromise is not a dirty word”