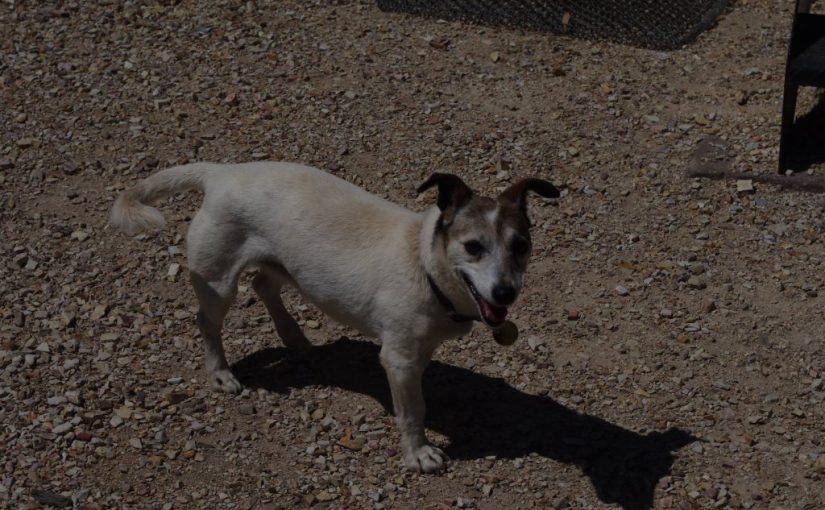 Around and around she travelled, at ever increasing speeds. She’s once, twice, three times, but she ain’t no lady. Still, despite her less than lady like demeanour, I love the old Scritchy dog. And incidentally, she made it around the house six times that day before I put a stop to her craziness.

At eighteen years of age, old Scritchy is physically quite well, but she really is losing her marbles.

Ollie the much younger and much larger Australian cuddle dog (all right thinking folks know him to be an Australian cattle dog) sometimes looks at his elder mate in a funny way. He’ll cock his head to one side, and put on a quizzical canine expression as if to ask the hard questions of the elder Scritchy: “Dude. Why are you trying to bite my throat? Surely you don’t think that you stand a chance of success?” And all the while Scritchy is bouncing up and down whilst she declares: “Ollie, you’re going to die, and I’m going to be the one that kills you. You will know true fear.” Bounce. Bounce.

There are times when Ollie has had enough of the rambunctious elder Scritchy, and he puts one of his very large paws out and gently presses her to the ground. He’s actually very gentle with her, and during wet weather you can see the dirty stomp marks on her back when he’s tried to tone down the worst of her excesses.

Toothy has no problems at all with the elder Scritchy. She’ll go up to Toothy and randomly (with her limited number of aged but still quite sharp teeth) attempt to bite his face. Toothy will just bow his head in submission. There is always more to these stories than meets the eye, and the two dogs have a long standing fluffy arrangement, which involves Scritchy leaving a substantial portion of her dinner to the easily beguiled Toothy. Toothy might be on a good thing though and because of the fluffy arrangement, he barely eats any breakfast. It’s complicated, but I guess they’ve known each other for many years.

I tend to sympathise with Ollie, because at night Scritchy also drives me bonkers. There I am at the computer replying to lovely comments or writing the next blog, and Scritchy bounces off the green couch and demands to be let outside so that she can go to the toilet. Except that because she is very old and losing her marbles, she forgets that it was only five minutes previously that she demanded to be let outside. Toothy of course encourages her because he enjoys the stimulation of running around outside in the early evening when the activities of the wildlife are only just beginning to get underway. You can almost hear Toothy egging her on: “Carn Scritchy! Let’s go outside on an adventure”.

Tolerance is defined as: “the ability or willingness to tolerate the existence of opinions or behaviour that one dislikes or disagrees with“. Yeah I hear that, but there are limits. So after about the fifth request by Scritchy within half an hour to be let outside to go to the toilet, I bring out the wooden spoon. Wooden spoons are handy items and they are generally well made if carved from a single source of timber. On the desk next to my keyboard and within easy reach is a wooden spoon with a long handle. The tool provides me with exceptional reach, and I don’t have to hit Scritchy with the wooden spoon, all I have to do is gently touch the spoon against her head and make odd sounds like: “Grrrrrrrrrrrr!”

The thing is, the sneaky old broad then pulls what is known as: ‘sad old dog face number six’. This is an even more effective form of sad old dog face than the noteworthy contender: ‘face number five’. Anyway, she’ll look oppressed and cower at the mere thought that she’d be chastised for her behaviour. Promises will be made by Scritchy to act more normally in future. For a while, peace will prevail, then half an hour later it will all be forgotten and she’ll be back to her usual mischief.

Incidentally, there are times where if I do not succumb to her wishes to let her outside in a timely fashion, she will happily do a wee in front of me (or the editor) and then toddle off with a haughty expression which suggests that the incident was somehow my fault. Fortunately the flooring in the house is hardwood and so the incidents are easily cleaned up, but still, the other two dogs look at her and you can almost hear them saying: “Scritchy, you are like, super bad!”

For a while I wondered if Scritchy had become incontinent in her elderly age, but the thing is, when required, Scritchy can hang on for many long hours at a time. During the day, I put her outside so that she can run around in the fresh air. And she’ll spend hours and hours walking around the house trying to work out how to get back inside again.

As a consequence Scritchy’s world is small, and when she is outside of the house and she spots me near to one of the entrances, she’ll get really excited and begin running towards me. Then just at the last second she’ll attempt to dodge me and continue runing around and around the house at full speed. A while back I wanted to see how many times she would run around the house, and I had to put a stop to it by the sixth circumnavigation, as she displayed no signs of stopping.

Einstein once defined insanity as: doing the same thing over and over again and expecting different results. And Scritchy sure has that act down pat. Her patterns have to be just right and most exacting, otherwise there will be difficulties – for me of course, not for her.

Over the past few days, there have been three nearby bushfires which were of concern to us. We have a written list detailing what needs to be done and taken if directly threatened by a bushfire, and the plan is to leave the house to fend for itself. The house is built to withstand some pretty serious and horrific conditions that most houses aren’t constructed to withstand. The house and most of the sheds would probably be fine in the event of the worst case scenario, but do I want to be there to find out firsthand that I stuffed something up with the construction? It is possibly not a very bright idea.

On the other hand, the purely pragmatic side of me pondered the question as to whether I was doing the right thing by removing Scritchy dog from the house, should we be forced to abandon the house during a direct bushfire threat. It is more than likely that the house will be fine if the worst case scenario was to occur, but then again it might not be fine.

And whilst I was considering Scritchy repeating the same behaviours over and over again ad nauseum, I wondered just how many of these epic scale bushfires the country has to endure before we change our relationship (and tightly held, but false beliefs) to the environment?

In the above photo, you can actually see one of the nearby bushfires. The origin of the fire is just below and to the right of the setting sun in a valley. Long term readers will notice that Mount Blackwood and Mount Bullengarook which are normally visible, have disappeared due to the thick smoke.

Despite the epic scale bushfires, work has to continue on the farm. And work (and action) it should noted are good antidotes to feelings of general concern about the environment. Winter may be far away, but seasoned firewood is best stored under cover when dried by the extreme UV of the summer sun. The primary (and much larger) firewood shed is now full. Wet and unseasoned firewood does not burn well, and such poor quality firewood will damage steel wood fireboxes and clog chimneys with gunk (technically known as creosote).

Because the inner layer of steel is now much higher, we can stack far more firewood inside the secondary shed.

The locally quarried crushed rock with lime was placed on the landings next to the two gates on the recently completed garden terrace project.

The power wheelbarrow was also used to bring two huge loads of rocks back up the hill to fill up the ground behind one of the almost full steel rock gabion cages.

The hill can be steep at some points.

Two huge loads of rocks were dumped into the cavity behind the steel rock gabion cage. We were then able to use the remaining crushed rock to place onto the surface. It looks pretty good and is very stable.

December was an extraordinarily dry and hot month. We’d been hoping that the depth of quality soil in the blackberry / raspberry enclosure was good enough so that the plants could survive such harsh conditions without additional watering. Turns out the blackberries appear to be doing well, but the raspberries have seriously struggled. We have enjoyed less than a dozen raspberries for the entire season.

This week we added an irrigation line to the blackberry / raspberry enclosure and they enjoy 15 minutes of daily watering via the dripper lines (which roughly equates to 50 litres or 13 gallons per day). The watering robot now controls daily watering on four of the five terraces and I can almost hear it claiming: “Relax’ said the watering robot, We are programmed to receive.”

The editor is very unhappy with the wallabies. For those that don’t know, a wallaby is a slightly smaller brown forest kangaroo. Several of them live on the farm, and I don’t begrudge them their fair share of the farms produce – especially in seasons like this one where they’re doing it really tough. However, some plants are off limits. The wallabies on the other hand see the fluffy arrangement differently, and they broke into the garden terrace a few nights back. The editor is unhappy because the wallabies ate most of her rose collection.

The crazy weather has meant that it might be a very poor tomato season, and so I am very grumpy that the wallabies also ate the tops of many of the tomato plants.

Poo CamTM tells no lies and the wallabies even left a cheeky calling card to announce their successful marsupial smash and grab.

The fencing was temporarily upgraded as a priority. After the growing season, a permanent fence will be installed.

In other produce news, the first of about ten grape vines has now reached the lower stainless steel cable where it can grow along.

The first zucchini (courgette) was harvested this week:

We have left a large portion of our tree crops for the birds this year. The tough climactic conditions means that they need a hand, and the birds live here and can’t travel far, whilst I can travel to nearby organic orchards and purchase quality sun ripened fruit. However, this apricot tree looked so juicy that I picked it:

Despite the amount of fruit consumed by the birds this year, we still have plenty of stone fruit. I have a box sitting inside the house slowly ripening. The fruit has flavour, it just needs to soften up a bit before consumption or more likely it will be bottled (canning).

We also bottled (canned) a quarter years supply of sun ripened and very tasty apricots as well as converting the 3kg (6.6 pounds) strawberry harvest into 16 jars of tasty strawberry jam. Both will be enjoyed when winter finally rolls around again.

72 thoughts on “Around and Around”