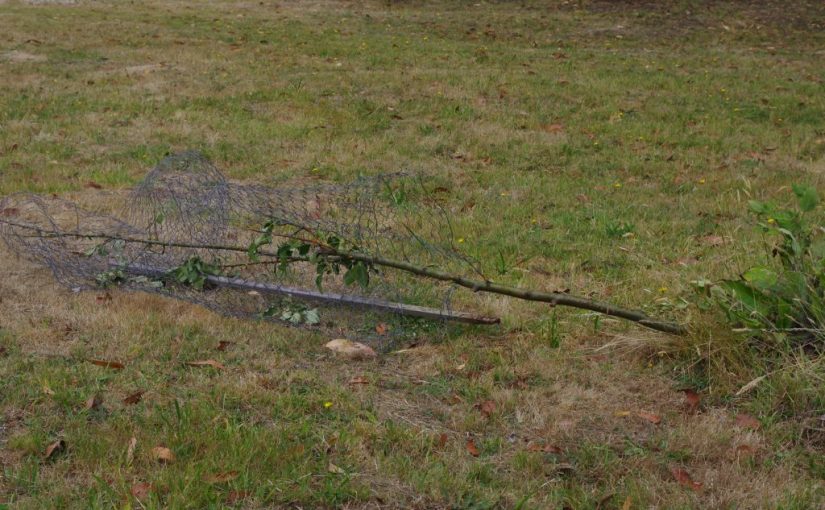 The recent horrendous bushfires have been dominating my thoughts. I mean, for a start, the media attention has certainly been focused on the fires. And fair enough too, the fires have burned through nearly 11 million hectares (that’s 27.5 million acres). That’s a lot of land burned, and a back of the envelope calculation suggests that it is about the equivalent of half the landmass of the UK (about 60 million acres).

Day to day life here at the farm has meant that the fires are never really far away. When the winds blow in the right direction, they bring thick smoke over the farm. For about half of the week, visibility has been very poor, and you can taste the acrid burnt organic matter on your tongue.

But it’s not until you see how it looks, that you can begin to understand what it may even mean.

It looks exactly like fog, but tastes like smoke. The thick smoke makes it hard to get a deep breath, or even work outside. But life goes on here.

True believers and hardcore fans of renewable energy systems will be dismayed to learn that for three days, due to the thick smoke, the solar photovoltaic panels enjoyed less than an hours sunlight per day. We survived on the little electricity produced by less than an hours sunlight per day for several days in a row, but I have strong reasons to believe that an average household could not replicate such a feat.

Fun Fact: ‘Shut Yallourn in three years,’ green group says – Yallourn is a large coal fired power station in the state of Victoria (where I live). Coal may not be good for the environment, however unlike wind and solar, coal provides electricity on a consistent 24 hour per day basis. Renewable energy systems are good, but they cannot replicate what coal does for the same price. And from a greenhouse gas perspective, Yallourn is probably of concern, but the bushfire green house emissions are: Far worse

Thankfully after about four days, the thick smoke dissipated. But it hasn’t completely gone away. The view to the horizon shows that a grey haze has settled over everything.

I mentioned the media concern above, and they’ve done a fine job of reporting on the bushfires. The firefighters, who are mostly volunteers (both the editor and I were also volunteers many years ago), have done an amazing job given the circumstances. The military has also assisted to good effect. The state and local politicians aren’t looking too bad either. The federal politicians have been frankly kooky, but lets ignore them. All up, most of the responses have been pretty good.

What has interested me is that questions as to how this situation has occurred and how to prevent it from happening again in the future are being aired and discussed in the media. It is good to see people throwing ideas around, but there are also people debunking new ideas and suggesting to stick to the tried and true path. So what is playing out in the media, reminds me of nothing other than when I worked in the big end of town in the aftermath of an epic fraud – except with a different outcome.

I was new to the job and as such had little emotional investment in the fraud. Other people clearly felt differently about the fraud and emotions ran high. The person who had caused the fraud was obviously no longer employed, but the repercussions of their duplicity were everywhere. In the first meeting with my new team, I managed to sack someone, which was a surprising turn of events, even for myself. I had to set the tone though, and just focus the team on sorting through the mess and repairing the damage. Then basic processes were set in place to ensure that the opportunity for fraud did not arise again.

It’s not a complicated process, but then I had complete control over, and also drove that process. This meant that there was little hindering me to ensure that the changes got implemented properly. And as I instituted the changes to the business, it became abundantly clear to me that the reason the fraud occurred in the first place, was because the systems were so poor that the fraud was an almost inevitable outcome.

The bushfires look a lot like that to me. The current policies and procedures in place, inevitably lead to the outcomes we are seeing today. And they’re not good outcomes that can be lightly brushed away.

Over the years I have stuffed up (the technical description for getting something seriously wrong) many things. On the other hand, I have gotten a lot of things right too. However, if I stuff something up, I have to acknowledge that that is indeed the case. After acknowledgement, I require a bit of quiet self reflection on how the failure occurred. I also find it helpful to seek some advice from other people who have encountered a similar situation. It is also good to consider what can be done to prevent the failure from happening again (or at least minimising the impacts) . Then comes action time – when ideas hit the hard road of reality.

The thing is, the state government down here controls, resources and enforces land management policy. And it appears to me that it is these very policies that have created the environment for such epic bushfires. If I was going to write them a school report card, I would give them an A+ for the response to the bushfires, but an F- for preventing the bushfires in the first place, with the note to their parents that they: ‘could do better’.

Fun Fact: What are hazard reduction burns, are we doing enough of them, and could they have stopped Australia’s catastrophic bushfires? – A hazard reduction burn is akin to what the indigneous folk did before people of European descent arrived on the scene and changed land management practices. As far as I understand things, every inch of land on the continent was burned by the indigenous populations in small patches on a 3 year (grasslands) to 15 year (tall forests) cycle. In Victoria, the state was settled in 1834. By 1851 only 17 years after settlement a quarter of the entire state burned within only a few days – which by all accounts was unprecedented. I have heard old timers quip that where there is no fuel, there is no fire. Seems like common sense to me. However, the article I linked to shows pretty clearly that there are a whole bunch of opinions and agendas.

In the real world, I guess policy is a messy thing which incorporates years of culture, cost and varying points of view – and not all of them have to make sense or even work. Possibly policies will please nobody at all. But in the face of the sort of epic failure we’re seeing with these bushfires, perhaps existing policies need to change utterly.

Fun Fact: Scott Morrison (Prime Minister) to take proposal for bushfire royal commission to Cabinet – A Royal Commission is a major ad-hoc formal public inquiry into a defined issue in some monarchies. We had a Victorian Royal Commission after the horrific 2009 bushfires – but the findings and recommendations of that Royal Commission didn’t seem to prevent these current fires in Victoria. There was another Royal Comission after the horrendous 1939 fires too. There may have been others. I guess governments need to be seen to be doing something, and there will be plenty of people who have never seen a forest set to make heaps of mad cash courtesy of the Royal commission.

So far, the best suggestion I’ve encountered is to create: nationwide fire-resistant planted landscapes, a mosaic of thousands of kilometres of fireproof walls, and burning regimes suited to each ecosystem, not one size fits all. You can read more about it here: From fire evacuation rooms, Diary of a Wombat author pens her message to Australia. Is it going to happen, probably not, but it would work.

Despite the inability to take a deep breath due to the smoke, work continued. We discovered six large rocks and relocated them to the terraced succulent garden.

There, the rocks were put to good creating a new level on the terraced succulent garden. Incidentally, that area used to be where the original strawberry patch was located – and that strawberry patch was an epic failure involving leeches and wallabies. The new terraces look better, and more importantly, they work better.

A few more trailer loads of the locally quarried crushed rock with lime were placed onto paths and also near to the rock gabions.

Time was also spent cutting, splitting and hauling firewood. The firewood bay next to the house (which is used during winter emergencies) is almost full. The secondary and smaller firewood shed is now about 20% full.

It is very hard work managing firewood. Anything less than dry and seasoned firewood will damage steel in fireboxes and clog flues and chimneys. For firewood to burn well, it has to have a moisture content less than 14%, which means storing it out of the rain. It definitely needs at least two years seasoning beforehand (the technical name for storing the firewood after it has been initially cut) – during which it can be kept in the rain.

Much of the smoke from the recent bushfires would have been the result of burning green and unseasoned organic matter, and I’d really hate to think what I’ve been breathing in over the past few weeks.

I don’t ordinarily plant trees during the summer months, however sometimes I make an exception for special trees. After the bushfires I purchased an evergreen Holm Oak, and planted it on the farm. I have high hopes for the various Oak species and noted many specimens after the 2009 bushfires that appeared to survive and resist bushfires. An impressive achievement when you consider that I’d also seen photos of alloy vehicle engine blocks which had melted due to the heat from the fires.

Regular readers will recall that the wallabies (a forest dwelling kangaroo) did a smash and grab raid on the rose terrace recently. Well the wallabies have been feral, because this week they flattened a five year old apple tree. I have been introducing Ollie the very large Australian Cuddle Dog (alright, alright, he’s an Australian Cattle Dog – and not feeling very well tonight) to them and they are frightened to make his acquaintance. The wallabies enjoy produce from the garden and orchard, but acts of vandalism are met with unexpected acts from me.

The corn is doing well, however germination rates were very low, and we intend to completely review and overhaul our seed raising processes this coming winter.

The three Kiwi fruit vines have enjoyed the crazy weather this year. The vines are dripping with fruit.

The crazy weather this summer has not been kind to either the tomatoes, capsicums or eggplants. Fingers crossed that I’ll be able to harvest at least some fruit by mid-March.

Raspberries were a disaster this year due to the crazy December heat. However, blackberries are making up for that and it looks like it will be a bumper crop.

The other day I noticed that a watermelon had self seeded (produced a volunteer plant) despite the crazy weather and lack of watering.

The recently planted replacement Lemon Eureka has loved the sunny and hot conditions. As it is a recently planted tree, I do occasionally provide it with some water, however, both orchards rely purely on rain water.

67 thoughts on “Getting away with it all messed up”