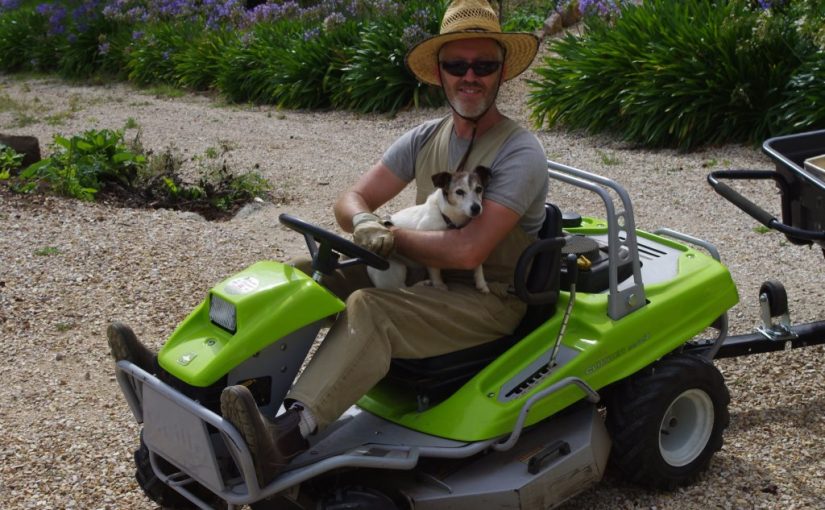 The long deceased American author Mark Twain once wrote of dogs that: When a man’s dog turns against him it is time for a wife to pack her trunk and go home to mama. Fortunately for me the canine fluffy collective that work here on the farm, are most definitely on my side. The editor is quite fond of me too, or at least I’d like to think so.

Plenty of people think otherwise, and I’ve noted that grand gestures score more social brownie points than the little things in life do. Who is not impressed by a huge wedding, a massive holiday, or an even more massive house? Such things are the markers of social success, however woe is me because I avoid such things.

On the other hand, there is always the Lindt Ball attack.

The coffee on the right is for me, but the coffee on the left is for the editor – as is the chocolate. What better way to start a day than a proper Latte (sometimes known overseas as an Australian flat white) coffee in bed, a small chocolate, and a good book? If there is a better way to start a day, I have not yet heard of it. And some mornings each week, that is the dreadful ordeal that the editor has to face. Please spare a thought for her.

A week or so back I was asked the hard question as to why I don’t travel much any more. It was a tough question to answer, and I responded to the simple question by using my best work in the gentle art of obfuscation. Obfuscation is the fancy word for what is colloquially known as bullsh#t, or more technically: ‘the action of making something obscure, unclear, or unintelligible.’ You may have noticed that politicians pull that trick out of their sleeves far more often than they should.

It is not really part of my nature to obfuscate, but in that particular instance I was uncertain as to my motivations and just didn’t know how to respond. And the question has haunted me ever since it was asked, and so I really had to dwell long and hard on a response.

In the end, it all came down to coffee. The number ‘Forty Two’ was provided as the mysterious answer to the ultimate question of Life the Universe and Everything in the most excellent book “The Hitchhikers Guide to the Galaxy”. Mysticism is probably not my bag and so I intend to explain what I mean when I say that the answer to the questions asked of me is: ‘coffee’.

So what exactly is mad cafe cash? It is an abstract concept that equates to the real world cost of a coffee, raisin toast, or most excellent muffin. There is a place I have frequented for more than a dozen years and they roast their own coffee beans out back, but they also bake the most superb muffins. Once long ago, the nice folks working there almost spilled the beans, and they began to tell me the secret formula for their muffins, but no I resisted. I cannot un-hear that sour cream was involved in the process. Anyway, some knowledge is too heavy to bear, and I’d rather use my mad cafe cash to support their ongoing excellent work.

Realistically, time is limited and in a year I cannot physically enjoy the experiences that 1,000 mad cafe cash units would buy. That works out to be more than two and a little less than three cafe experiences per day – for the entire year. So much coffee would leave me feeling a bit jittery and slightly agitated – and who wants to see that? The poor barista’s dealing with my state, might cut off my coffee supply if I took things to such an awful extent.

There are a few students of economics who read the blog (you know who you are!), and I have no doubts that they were probably already busting to to blurt out their salient observation that: People who only indulge in say 150 mad cafe cash experiences per year, spend far less than those who indulge in 1 overseas holiday per year. The facts speak for themselves, and the corollary is that a person so doing, doesn’t need to earn as much actual real world mad cash.

I’d really like to make a grand and virtuous statement suggesting that I no longer go on overseas holidays because it is a good outcome for the environment. It certainly sounds good to my ears, and makes me feel all righteous and stuff. Unfortunately, it is not true at all, the editor and I just prefer the little enjoyments in life.

Who cares about the work we did on the farm this week – if only because there are two crazy sheep dog puppies running around the farm!

Plum and Ruby have already wormed their way into our hearts. And they love their food.

The two newbie girls are learning the ways of being a farm dog. And we are exhausting them. At night they fall soundly asleep in preparation for the next days activities.

It wasn’t all puppy work this week. We’ve been upgrading the solar power system. Regular readers will recall that a few weeks ago, a bloke who is a mate of a mate offered us eight free solar panels. Before the encounter it never even occurred to me that people were disposing of perfectly good solar panels, and that the regulatory system in place is encouraging such epic waste. It is a truly bonkers story that one, and no matter how it might be talked up by the authorities it reflects very poorly upon our society. However, it really is a thing. I managed to score another eight solar panels this week for about 40 mad cafe cash units. Bonkers.

With all of these extra solar panels, I have had to construct a new structure to hold them all. Earlier in the week I picked up a load of steel for that very purpose.

The editor designed a structure that would use two of the three the existing steel posts. That left another eight holes to be dug for new steel posts.

The eight new steel posts were then cemented into the holes in the paddock.

The intention is to begin installing the steel supports for the posts over the next week or so. The concrete first has to cure, and that usually takes a few days.

We used the low centre of gravity ride on mower and its trailer to take sand, gravel and cement down to the work site in the paddock. I hadn’t used the mower for a month or two, and it had a few minor technical difficulties, so I performed a few maintenance jobs on it. The mower had not appreciated sitting around doing nothing for the month or two, and in future I intend to just get the machine going a bit more regularly. It is a case of use it or lose it.

To cool the machine down after use, I was toodling around the house doing circles. I spotted Scritchy the 19 year old miniature fox terrier and on a whim I took her for a spin. She loved it, and was having a blast, but eventually I had to put the machine away, and that was when Scritchy went back to her usual aloof self.

The weather has turned mostly humid and cooler of late, although we still get some very hot days. This sort of weather is perfect for the Portuguese millipedes, and they are to be found everywhere.

The wetter weather is a real boon for the frogs that live on the farm. The other night I spotted this Pobblebonk frog. The name sounds very much like the sound that the frogs make.

At night there are also huge moths flying around. I suspect that the Sugar Gliders consume the moths, but even so there are a lot of them around. I spotted a Bogong moth attached to a succulent plant the other night.

We’ve completely weeded all of the vegetable growing spaces. The former tomato enclosure was turned into a space for growing pumpkins, squashes and melons, and those plants require a lot of space.

Raspberry transplants are being placed in the corn enclosure. Next summer the corn will be grown elsewhere.

The grape vines in the strawberry / grape enclosure are growing really strongly. One vine in particular has reached the second and highest wire and I am slowly training the vine to travel along the two wires.

The raspberries are being slowly removed from the blackberry enclosure. The blackberries just grow too strongly for the smaller raspberries.

The Kiwi Fruit vines have produced very solidly this year.

The developing succulent terraced garden had some new plants added to the collection.

91 thoughts on “The Great Unravelling”