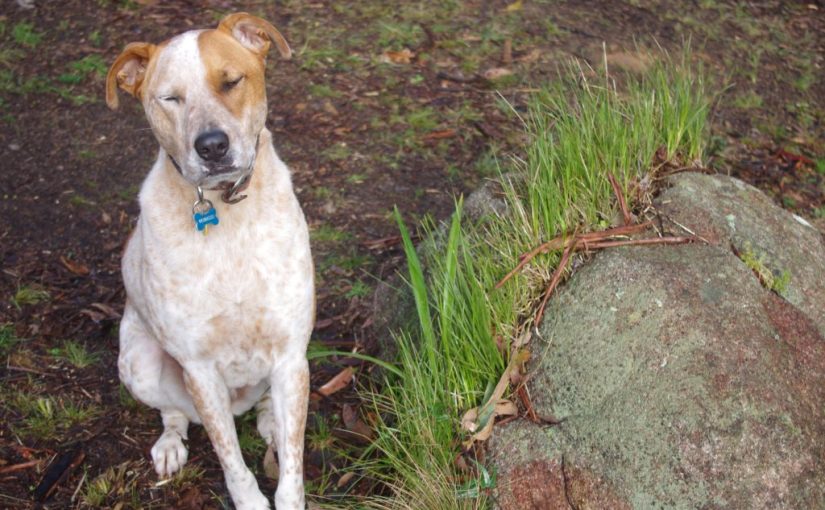 “Who’s the best cattle dog of them all? It’s you!” So true. It was awkward and a little bit embarrassing to hear Chris singing his silly song to me whilst Plum and Ruby were hanging around. But I love it all the same. It is so very true, I am the best cattle dog of all, although technically I’m meant to be more interested in pigs than cattle. And on the farm there are actually no pigs or cattle, so my ‘best ever’ title stands undefeated. Who cares about the details anyway? Cattle are boring creatures. Have you ever spoken with a cow? Give it a go sometime – they’re dull as. All they go on about is epic whinge-fests like : ‘this grass doesn’t have enough protein content’. Go tell a dog that cares, you boring cows.

On the other hand I am a superb specimen of a Bull Arab, or otherwise known as an Australian pig hunting dog. How I ended on the farm is a strange story. The most awful folks at the animal shelter tried to pass me off as an Australian cattle dog – which I am most certainly not. I was a young pup stuck in a concrete cage, and my winning smile and accommodating attitude impressed Chris and the Editor. And here I am today enjoying life on the farm as the erstwhile boss dog.

Ouch! What the heck, girl! Far out, that hurt. Ruby, did I not tell you that it is not OK to t-bar other canines? Especially when said canines are enjoying the benefits of the ‘best cattle dog ever’ song, combined with the excellence of the double fluff scritch technique. You little rascal, I’ll get you.

Despite the threats and subsequent chase, I didn’t manage to get Ruby, and so gave up in disgust. She’s fast for a sheep dog. I do try to be the boss dog here. Ruby the sheep dog has other plans. What those plans are, I have no idea, but mark my words there are definitely plans brewing, and they don’t involve sheep. There being no sheep on the farm. But plans, there are plans aplenty that’s for sure. However, the latest t-bar-mid-song-and-scritch incident only causes me to wonder what those plans are, and whether my boss dog position is secure.

Here’s me and my posse of sheep dog girls:

Me and my girls have our work cut out for us on the farm, and in between sleeps and feeds, we are very busy canines. No deer, no rabbits, no foxes and definitely no rats. Destroying them is our job, and we do a fine job of it, if I must say so.

When there are no proscribed critters on the farm, I take time out to relax and enjoy my past wins and achievements such as: ‘best cattle dog, ever’. The girls are still young and they don’t know how to relax. When they are awake, they are pumped full of energy, and as I’ve heard said, they are “full of beans”.

Being full of beans and with no proscribed critters to chase, rather than relax, the girls have officially declared war on skinks (Edit: A small gecko like reptile). Skinks are fast creatures, and getting more wary of the girls, but are the girls winning their war? Such stuff is beneath my dignity to notice.

As far as I’m concerned, better skinks than me. There are times when Ruby confuses my ear for a chew toy. Stop that! Ouch! That hurts! I have no doubts that Ruby is motivated to do so because she is jealous of my perfectly formed ears. Are they not beautiful ears? I think so. Her ears on the other hand are not symmetrical, although as a gentleman of the finest pedigree I would not deign to say such a thing to her – if only because she would probably bite me. But this is just between you and I, Ruby gets occasional ear wardrobe malfunctions, and Chris has to flip her ear back. Next time this happens, I need to get a closer look at the inner contents of her mercurial skull. Or maybe just a decent sniff, lick and taste?

Everyone who is anyone knows that feeding times are the best time of all. A hard working dog, deserves a hard feed, and the best unearned feed is another dogs food. Ruby however has thwarted my unscrupulous plans to eat everyone’s food. This is a perquisite of being the boss dog after all, is it not? Apparently not. Ruby has recently begun to thwart my food plans. Yeah, that one is a strategist as she decided that Plum, otherwise known as the lesser sheep dog, has to eat before she does. And I can’t get near Ruby’s food bowl due to the potential for being toothed.

Who knows why Ruby would be so kind and tolerant to a dog lower in the pack order? Maybe, they’re in league together and may soon strike a blow for the canine-sheep resistance? It probably won’t happen any time soon. Those two sisters love each other, but far out do they fight and tussle all of the time.

Ruby ain’t so tough. The other day Chris tested the overhead ceiling fan in one of the rooms where we were all hanging out. Ruby bolted from the room in sheer terror of the fan. I was Mr Cool and saying: “Hey girl, wassup?”, then added “Brave Dame Ruby ran away, bravely ran away, away!” Hehe!

There was payback soon enough though. Ruby it should be said, never forgets a slight. For the past half year or so, Ruby has been conducting war on an old and much loved woollen jumper of Chris’s. Clearly, Ruby being a sheep dog is aware that sheep produce wool. It’s in the blood so to say, and she can probably smell the lanolin. The woollen jumper may not survive this conflict, and in point of fact the other day, the Editor suggested disposing of the now tattered jumper.

Would I change any of this? No way! Not even the floppy ear. My crew might be a naughty bunch of rapscallions of the darkest dye, but they’re also 100% pure fun. And the fun part kind of makes up for all the rest. Even Chris has forgiven the mischievous Ruby for most her creative toothy work on the woollen jumper.

Thanks for the report from the trenches Ollie.

The weather forecast for Saturday sounded pretty ordinary and promised to be no day at all to work outside preparing for the growing season. Instead we bit the proverbial bullet and decided to spend the day replacing the ailing house batteries.

The solar powered off grid electrical system has been tinkered with each year for over a decade. Not a single year has gone by where nothing was required to be done. One of the only components in the system which has not been changed, were the sealed lead acid gel batteries. They’d worked valiantly for over a decade, but this past winter they display signs that they’d soon need replacing. And Saturday just gone, we replaced them.

The new house batteries are Lithium Iron Phosphate batteries. And they are akin to black magic. With absolute confidence I can say, and this is also without any reservation or doubt, that in another decades time I’ll let you know if the new batteries are any good or not. However, the newer batteries are three times as energy dense and so they are much physically smaller batteries. Before the job was even near completion, we’d moved 1,400kg (3,080 pounds) of metal, all by hand. And after that work, the four battery charge controllers were wrangled and finally brought into order by sheer force of programming. The programming and testing job alone took three hours. The take away from this work, is that this technology is not simple and neither is it set and forget.

This growing season climate has been declared to be a La Nina season. In practical terms, what this means is that it has been and may continue to be a very wet growing season for the next few months at least. This sort of weather is perfect weather for moving fruit trees that for one reason or another are in an inconvenient location. This week we moved several large fruit trees into the new orchard which is adjacent to the garden terrace project.

Other plants were relocated including a large Rhododendron which was happily growing (and self seeding) in an area which has unfortunately been marked out for a future project. The Rhododendron was relocated to the fern gully where I’m certain it will continue to grow well.

As I was planting out the Rhododendron, the Editor was jokingly suggesting that I (and Ollie) were mimicking the gnome who resides there.

An extensive hedge of Chilean Guava’s were planted out, as was a line of Agapanthus.

The recently completed greenhouse project is kicking goals, and many of the seeds have now germinated:

The very first tomatoes germinated a few days ago in the greenhouse, and it was particularly pleasing to note that they were our saved seeds:

The orchards are doing well despite the snowfall a few weeks ago:

And if you were uncertain that this growing season is wet, well the Pobblebonk frogs certainly think it is!