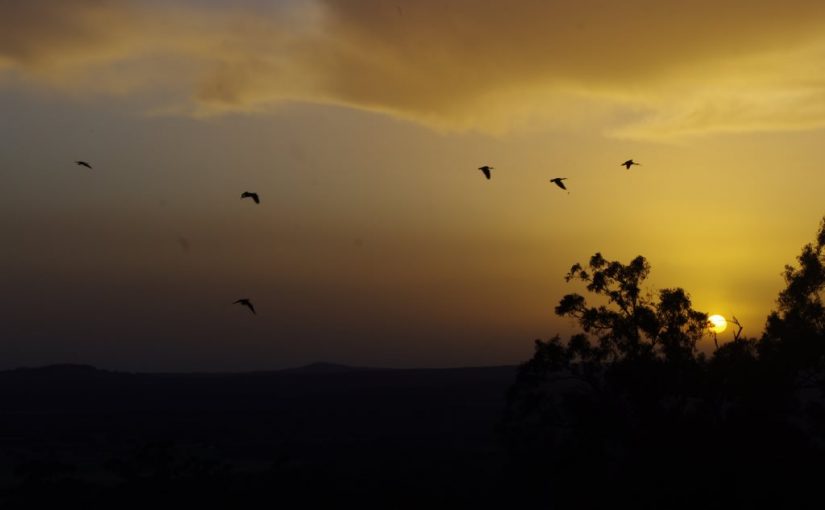 Late Spring turns to Summer. The weather is warm, other times hot. To place your nose outside the well sealed house is to be confronted by the smell of heat. Fortunately the farm is located on a quiet back road. When the rare car travels past on the dirt road, a cloud of dust travels in its wake. You can smell, and even see the cloud of yellow-orange dry clay from the road as it lifts into the air in the vehicles wake, only to descend over the house in slow motion. Mixed into the dust is the scent of wild honey courtesy of all of the farms flowers and surrounding forest, and always there is the background aroma of eucalyptus. The heat has an elusive smell, borne of all these things and then some. But mostly, late afternoons are just hot.

The house may be well sealed and heavily insulated, but a hot day is a hot day after all, and there is only so far that sealing and insulation can protect the occupants. Earlier in the week after a hot day, the overnight low temperature was 23’C / 73’F. This week was a foretaste of even hotter summer nights yet to come.

We don’t have air conditioning in the house. Instead we utilise the cooler outside nighttime air and expel the warm air which builds up during the day. The house generally cools down overnight. It’s an old technique, and it mostly works, except when the nighttime temperatures are unpleasantly hot, as occasionally happens.

Air conditioning in a house has never really been part of my life. Instead I prefer to adapt to the conditions and try and make the best of them. Unfortunately, in recent years, the night time temperatures seem to be getting warmer. A decade ago it would have been rare to see a night as warm as 23’C / 73’F. Last summer one notable night was 29’C / 84’F, which candidly was a bit sweaty. With those potential hot summer nights in mind, we purchased a new set of sheets for the bed.

The sheets were made from fibre sourced from bamboo, and down here that fibre is generally known for its performance in hot climactic conditions. I was pretty excited about the purchase and wanted to wax lyrical, but at the same time it is hard nowadays to extol the virtues of such a simple adaption, without sounding like an advertisement. And unlike a lot of websites, we don’t do advertisements here, mainly because I don’t have to.

As a general rule, adaption to circumstances is usually the smart way to go. Having constructed this house ourselves and with our own labour, the editor and I have a fairly good understanding of how houses are put together. It is a fair observation that most houses constructed these days usually require mechanical heating and cooling. It is not lost on me that this situation is historically unprecedented. It is nice that some segments of the population appear to be concerned about the perils of climate change. And of late the concern has escalated to the point where society seems hell bent on shutting down large scale electric power plants. Maybe it is just me, but I do wonder how it will be possible to continue mechanically heating and cooling houses at scale, whilst closing down large electric power plants. The two mutually exclusive concepts just don’t make much sense to me. Makes me wonder how people will fare when the power’s off, or the energy becomes super expensive due to supply and demand issues?

Adaption to circumstances is usually easier. The editor and I were married in the midst of the recession that ‘we had to have’ back in the mid 90’s. It was a brutal economic time, and we were as broke as everyone else. The wedding ceremony was held in a park, and the reception was held for a small gathering of family and friends in a restaurant. It was a fun night.

The honeymoon was squeezed in between semesters at University. Studying at night is a tough row to hoe, and after a full day of work, well, sometimes in lectures your mind just drifted off. Fortunately I can do hard work, and so the higher education experience was survivable. Two weeks leave from work was granted, and the editor and I spent the weeks in the island state of Tasmania. Being winter, it sure was quiet down there in those days. Accommodation was very affordable. We had a blast, and stayed in old colonial and convict era buildings, including a former jail (with cells – very creepy).

One memorable evening near to the city of Launceston we decided to enjoy a late dinner, and so set out around 8pm in search of food. Now, that city is the second largest city in the island state (with around 106,000 people now), but frankly wasn’t much larger at the time than a suburb of Melbourne (our home city with a population of around 5 million now). We asked a local for advice, and sharp as a tack the lady queried where we were from and offered: “You’re not in Melbourne now”. Yes, very amusing, but whatever, and we did find somewhere to feed us at that supposedly too-late for dinner hour. And it was good.

You do learn how to adapt, however sometimes you just need some incentive to do so. Another time we were meant to be staying in Hobart, which is the capital city of the island state. Unfortunately we’d booked the wrong accommodation (but with a very similar name) and ended up about 40km / 25miles north of the city. I guess it pays to read brochures more carefully.

We were annoyed by the unexpected turn of events. The accommodation however, was a lovely old convict era barracks comprising of a one room up, and one down arrangement. It really was a beautiful old building in a quiet location, and the house even came with a black cat, who from memory was a very friendly moggie and happily just hung around doing its cat like thing. The cat may have even slept on the bed.

That first evening we decided that in the morning we’d change our arrangements and move to accommodation closer to the city of Hobart. A late dinner was booked in Hobart, so it only made sense to stay in the city. However that next morning, breakfast was supplied, and in among all the tasty food was a freshly baked and still hot small loaf of bread along with a pot of superb raspberry jam. It was bakery perfection, and so we immediately adapted and stayed there a further two nights.

Yup, we can adapt to circumstances, you better believe it!

The hot weather has been good this week. The plants are growing fast and a hot afternoon was the perfect time to be out of the sun and upgrade the computer system here. The modem was failing, and so was the device replaced with a more complicated, but hopefully far more robust device. But then one thing leads to another and I spent almost a day trying to fault find problems in the antenna system. All very necessary if you want a connection to the internet. I’ll spare you the details, if only because they are rather dull, but the system is now working well.

The farm activities at this time of year involves maintenance. The hot weather causes the plants to grow fast and sometimes in the course of only a week or two, the plants will have taken over paths and staircases. It is possible that a Triffid or two maybe lurking in the garden beds?

It isn’t only the garden beds which grow fast at this time of year, but the grass in the orchards and paddock also needs to be mowed. The job of mowing the farm is nearing completion. However, the task may be a bit like painting the Sydney Harbour Bridge, whereby you start at one end, work the entire length of the bridge, get to the end, and begin back where you previously started. It is possible that we’ll have to mow the grass three times this year.

The newly completed greenhouse has worked far better than we ever imagined. The seedlings grown in the greenhouse are possibly a month ahead of the directly sown seeds.

The last of the tomato seedlings were planted into the ground this week. We’re growing about 100 tomato plants this year, and hopefully it will be a good harvest when late January / February rolls around. So far this year we haven’t had to purchase any seedlings as all the plants were grown from saved and purchased seed.

The farm relies exclusively on rainwater collected off the house and shed roof spaces and is stored in large tanks. Water is a precious resource and so we have installed drip line irrigation on the garden terraces. A water robot controls the watering regime. Candidly, the water robot works really well as the system supplies water to the plants far better than I could. A close up of the drip lines in action can be seen in the next photo.

Observant readers will note in the above photo that some of the water from the drip line has rolled away. The photo was taken prior to planting of the tomato seedlings and the soil surface was baked hard by the hot sun. However, under the protective soil surface crust, the soil was damp. In order to plant the seedlings, the soil surface was worked a bit and now the water from the drip lines penetrates much further into the soil. Newly planted out seedlings receive 40 minutes of drip irrigation per day, and that time will be reduced as the seedlings become better established. Eventually, the plants will enjoy 10 minutes of watering per day through the drip lines.

I thought readers might enjoy the view from the eastern side of the farm looking back towards the western end. At least five sheds can be seen, as well as part of the garden terraces and the house.

In the past few days, strawberries have began to ripen.

Hopefully this year will be a good strawberry harvest, and the berries will be consumed fresh for breakfast as well as being used to make an excellent jam.

It may also be a very good year for apricots, and hopefully we harvest enough fruit to preserve for the following year.

Nashi Pears (Asian Pears) are forming on the many trees. The local parrots are a nuisance as they enjoy this fruit unripe.

This summer may be the best apple season yet.

If the birds leave the cherry trees alone, we might even get some fruit!

The oldest and fastest growing grape vine looks as though it may produce a few clusters of grapes. The vines are now around two years old.

64 thoughts on “What we do when the power’s off”