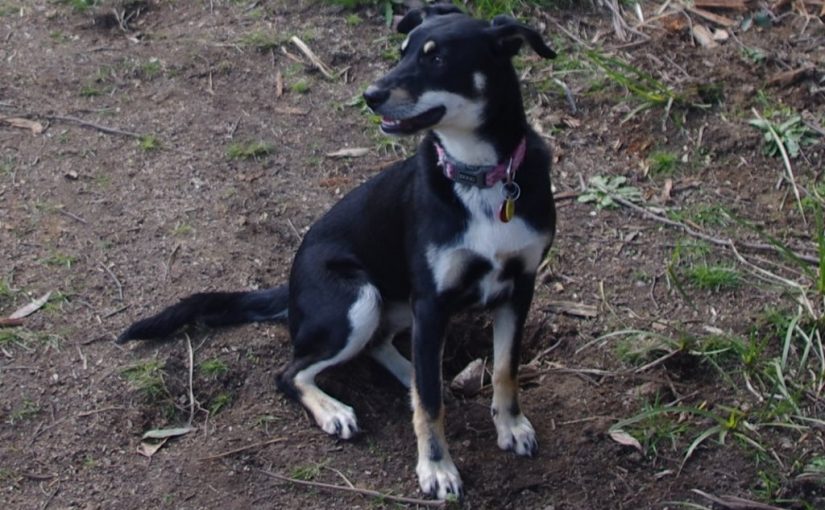 The summer of 2019 / 2020 was hot. Seriously hot. Drought held the country in a vice like grip. Plants could not grow when the only rain which did fall was half the expected average. Dust was all pervasive. It was on the ground, and also in the air. Dust storms, soon lead to fire storms, which due to their epic scale were reported upon right around the globe. Forests were destroyed, houses burned and people died.

In the time leading up to the brutal summer, November 2019, a Kelpie dog gave birth to a litter of pups on a farm way up in the drought stricken north of the country. On the farm, it was already a daily exercise for the people to hand feed the cattle and sheep. The farmer looked on in despair at the extra Kelpie mouths to feed. Only the best of the best would be retained as working dogs. The others would have to be finished off.

Tough times produce tough people, and epic droughts in rural areas is one such time. Fate had other plans. The farmer may have had a change of heart when another possibility emerged. “The timid one, and also the one with the mischievous face and independent attitude, have to go”, he may have remarked to a bloke he knew who resided on a farm closer to the big smoke of Melbourne. Down there the drought was also bad, but not as bad as in that far northern locale.

The two Kelpie pups at only ten weeks old were packed into a crate. The crate with the two pups was driven to a farm about an hours north of the big smoke of Melbourne. One of the pups may have said to the other pup: “Ruby, I’m scared”, to which Ruby replied: “I’m scared too Plum, stick close to me, girl.”

One of the two pups was of interest to another person. It was the pup with the symmetrical ears but timid nature. However, the person did a no-show. The pragmatic bloke agreed to our request (and cash) to take both of the pups on the day.

The two pups were chucked in the back of the Dirt Rat Suzuki and brought back to the farm to live.

Over to you, Ruby:

Mischievous face indeed! What do those farmers know: Nuffin’ anywhoo, that’s what they know, for I am beautiful! Of course it is well known that I have my own ideas, but what of that? It is they who lack their own ideas I tell you.

Life has its ups and downs, it sure does. It was a sad day when Chris put a collar around my neck. The only reasonable response to this outrage upon my dignity was to mope for a day. I soon got over it though, and paid Chris back by digging a large and very deep hole in one of the garden beds. Yes, that will teach them. When they said that I wasn’t the baddest bitch on the farm, well they lied!

Recently Chris has been training me to accept being walked around attached to a lead. I don’t need a lead! Do they not realise I have other ideas? During any organised walk, I confound these foolish humans by straining upon the lead, whilst if their attention is diverted but for a moment, the lead is wrapped around Ollie’s legs. This is easy to do for me as Ollie is taller and stuff, and thus has easy to entangle legs.

I love Ollie, he is my champion and my mascot. I can jump all over Ollie and he is such a gentle giant that he laps up the attention. He loves it. Except that sometimes he doesn’t enjoy the attention, and then he takes my head in his mouth. He has quite sharp teeth and a very big mouth. Ollie loves me though and he would never hurt me. I guess he is just setting some boundaries. It is not my fault after all, if he doesn’t enjoy being bitten.

It’s now been almost a year at the farm. I have had the opportunity to encounter many of the former dog spirits residing around the farm. Two of the dog spirits have piqued my interest. Old Fat, and Old Fluffy. Old Fat has some good ideas about how to run a proper dog pack, but Old Fluffy has just the right amount of naughty for me. The spirit of Old Fluffy told me recently that in order to control a dog pack of Fluffies, one must spend some time cleaning the other dogs ears. And so I’ve been busy doing just that. My sister Plum is my creature already, and Ollie, he is rapidly falling under my spell. I even discovered that Chris has tasty ears – when he was foolish enough to drop his guard in my presence.

We recently celebrated Christmas day. I was told it was some dude’s birthday. Chris regularly supplies bones for us fluffies to chew upon. But on the dudes birthday, we got the biggest bone ever. Oh, how us fluffies fought for days over that bone. So much fun!

Bones are great! Both the Editor and Chris have enjoyed me chewing upon all sorts of things. Most nights they give me a rawhide bone to chew upon. I love the rawhide chews and it is a real pleasure to chew upon them for many hours – better than television. After a day of running around the farm, an evening of exercising my jaws, I’m usually bone tired (with the remains of my chew bone).

Make no bones about it, the new boss is in town. And every posse needs a boss – and it might as well be me.

Thanks for the update Ruby.

Earlier in the week a large storm dropped the air temperature and produced almost an inch and a half of rain. Just prior to the storm, one of the clouds looked as though one of the nearby (hopefully extinct) volcanoes had decided to spew a large amount of ash into the atmosphere.

The final week before Christmas was a hectic period for paid work. However, this is nothing unusual because in the past three years I have had maybe one week off paid work. Due to the health subject which dares not be named, this year has been far from normal, and so I decided to take three weeks off paid work, starting Christmas eve.

Earlier during the work week, I rushed out to an Industrial estate on the far side of Melbourne in order to pick up a 20 tonne log splitter. The machine was well priced, especially given how heavy duty it was. The reason for the cheap price soon became apparent as it took about five or maybe six hours to assemble from the various components supplied.

I already had an electric powered log splitter which works just fine, and it is easily powered by the solar electric system. However, there are limits to the number of extension cables you can connect up before the voltage drops possibly causing damage to the electric motor. And with this new log splitter I can move the machine up and down the hill using the low centre of gravity mower. Hauling the former 90kg+ / 200 pound electric log splitter back up the hill is no small matter.

The editor and I then spent a day down below the house splitting and hauling firewood. Common sense suggests that firewood is stored during the hot days of summer when the firewood is dry. Burning wet, damp and/or unseasoned firewood is a very bad idea for steel fireboxes. The firewood is brought back up the hill with the assistance of a motorised wheelbarrow.

In the above photo the incline does not look all that steep, but from another angle it becomes all too clear. The machine does a lot of work, but it is not effortless and walking for six hours in between splitting and stacking firewood is not an easy or quick job.

Observant readers will also note that we have also began the second mow of this growing season. It is unusual to have to mow several times in a season, but this wet and cool year is proving to be the exception.

After six hours of work we stored away about 20% of the years firewood requirements.

The very first of the seasons Blackberries have ripened this week. They are an early thornless variety known as ‘Waldo’, and they’re extremely tasty.