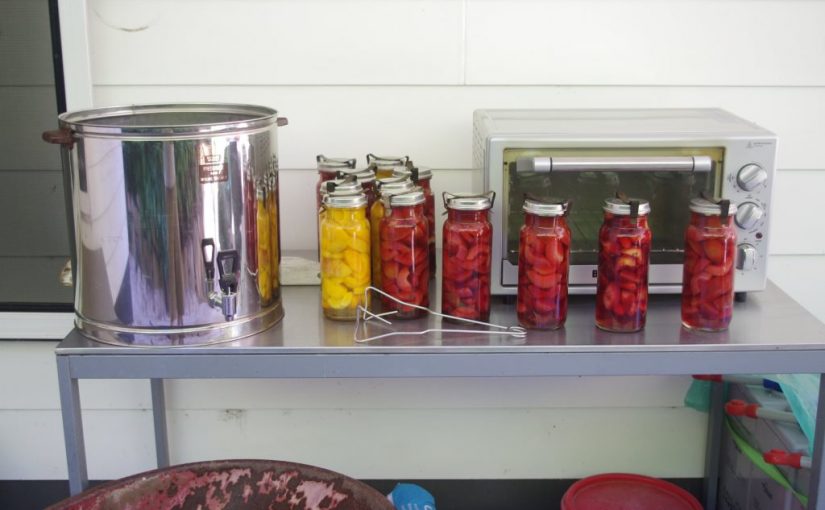 In the end, the unwieldy scales of balance and equilibrium all hinge upon the story of poop. It was such a hot day today, and no doubt last week’s description of the summer as a ‘relatively cool and damp’ season tempted the weather Gods to ‘bring it on’. They have an awful sense of humour those weather Gods, because this afternoon reached 37’C / 99’F. And tomorrows forecast is set to reach the even giddier heights of 40’C / 104’F. Having become accustomed to a cool and damp summer, the heat was quite the shock.

Still the juggernaut that is Fernglade Farm must go on, and we quickly adapted to the heat as best we could. Candidly we’ve experienced far hotter and drier conditions. As true stoics, we don’t have any air conditioning in the house, and rely upon ceiling fans and the heavy insulation in the walls, floor and ceilings. Still, insulation and fans can only do so much to ward off such hot weather, and eventually the heat ever so slowly finds its way into the house.

The work around the farm still has to be done though. I’ve heard that some people can wake up of a morning and wonder what the day may entail. It’s an awesome prospect to consider, and way outside my own personal experience! Most days, even the most stonking of hot days, there are mundane tasks about the farm which need doing. They’re not particularly noteworthy tasks, but if they’re not done, systems soon become unstuck. Mostly these tasks are never mentioned in the essay out of fear that they may be viewed by readers as tedious or inconsequential.

From the first moments of the morning, there are things that need doing. Once those tasks are done (breakfast, coffee, dog food, bread loaf, attending to the chickens needs) and fortified by a strong cup of coffee in those early foggy moments, a person can force themselves to scan the headlines of the news of the day. It’s nice to get a feel for general goings on in society. You’d have to have been living under a rock, or more than the usual level of apathetic, to have missed the political ructions going on in Australia’s major ally this week. As an outsider to that story, a person can have only the most fleeting of emotional investment in the outcome. To my surprise, such an observation could hardly be applied to our media given their general obsession and coverage of the topic.

It is possible that our media expects the fine citizens of this country to care far more about the politics of another country than they might? I’d suggest that as an alternative perspective, we have enough of our own problems to deal with, without becoming embroiled in another countries business. That however, may be an unpopular point of view given the obsessive coverage of events. Still, if a firm opinion one way or the other was demanded of me, I’d venture that the political ructions in our major ally, have all the elements of a fine Greek tragedy. The protagonists in the tragic narrative are the politicians and aristocracy of all stripes, and they circle repetitively around and around the prize like vultures waiting to seek but a moments advantage. However, despite their best efforts, machinations and intrigues, their personal failure is that they appear to not notice the day to day failures and future challenges that beset the very thing that is in their care. It sure will make for a gripping future tale told around some far distant future campfire, hopefully with a mead or ale ready to hand.

To me they appear lost in their various intrigues and belief systems. It must surely be a beautiful place to hide, but mostly it suggests to me a lack of long term vision. It is hardly comforting to observe. A decade or so ago, one of our Prime Ministers used to bang on and on about his belief system of ‘values’. Yeah: like what values? who’s values? and how does anyone expect to even implement a coherent set of values? As a deeply pragmatic guy, such talk sounded like rubbish talk to me. Political leaders do talk a lot of such nonsense nowadays as a smokescreen, and then they go off and do some other stuff.

As to the other stuff they get up to, well, they appear to be reactive to events as they present themselves. To be fair to the politicians and aristocracy, they’re merely products of the culture which produced them. In a crisis being reactive is probably a useful tool to employ, and it may even solve some immediate and simple problems. The flip side of that story however, is to be proactive. Sorry to say, but being proactive goes against the very grain of our culture. In order to achieve a proactive response, a person has to has to know where they want to go, and what they want to do to when they get there, not always an easy state of mind to achieve. And to know where you want to be heading, is to hint at the possibility of there being some sort of a vision in play, which as mentioned above is sorely lacking.

Yeah, so little vision seems to be the way of the world and unfortunately when applied to serious matters, well let’s just say that the outcomes are hardly good. A few months ago, on one fine afternoon that played out on a youth radio news program. The Federal minister for energy provided an alarming statistic that something like half of all calories on peoples plates, were directly attributable to fertilisers obtained from natural gas. Given that natural gas is a finite resource, this news should be ringing alarm bells. But no: The journalist wanted to discuss renewable energy technologies instead; An academic entirely ignored the not inconsequential issue of conversion of natural gas into fertiliser and instead he spoke knowingly and confidently about wind and solar technologies; and the Federal minister for energy pushed the need to increase mining for natural gas. Nobody discussed the elephant in the room (using finite energy resources to feed the population), but maybe it is too much to expect.

And all the while, the local media continues to bang on about the political ructions in another country.

Still, the tasks that need doing on a stonking hot day here on the farm, still need doing. And so in the heat of midday, I found myself lugging wheelbarrow loads of the chickens soiled bedding straw up the hill. The organic matter, rich in chicken poop, will provide a fine fertiliser to the orchard growing up in that corner of the farm. It is a heady fertiliser. When our civilisation stops flushing their poop into the ocean and redirects it all back to the agricultural soils, I’ll believe that we have leaders with vision.

Despite the warmer weather, one day earlier this week was cool to mild and we went hard and completed the job of bringing in the firewood for the season. It is a real pleasure to have access to a shed (or two sheds to be precise) worth of dry and seasoned firewood. Winter is never far away. And interestingly, next week looks as though the weather Gods will bring a significant chunk of rainfall, so the firewood job was finished in a nick of time. Damp or wet firewood does not burn very well at all, and damages the steel in a wood heater.

Another day was utilised moving large rocks. The large rocks are being placed as a support for the soil used in creating a low gradient ramp leading down into the orchards. Without the rocks, heavy rain may potentially wash away any soil used to create the ramp.

The low gradient ramp project is a long way from completion, but at this stage the ramp is usable. Rocks are being placed on the downhill side of the ramp:

It is hard to see in the above photo, but we have also placed rocks at the upper end of the ramp project. One day in the future, the two lines of rocks will meet, but that possibility is a few months/years away.

Even in its current far-from-completed form, we’ve made good use of the low gradient ramp.

A month or so ago, the editor nabbed some matching second hand cabinets and set about restoring them. Despite being 18 years old, the two cabinets were in excellent condition but were unfortunately stained an awful walnut colour. I can’t imagine what the original owners were thinking, but the manufacturers markings suggest that they were ordered to be that colour. The cabinets were sanded back to raw hardwood, and they revealed two very well made items of furniture. They’ve received five coats of Tung Oil, some polishing, and we replaced the very office-like handles with some way funky solid brass lizard handles. The job of restoring them is now complete, and they look really good.

Fruit preserving activities have now been completed for the summer. It is a pleasure to see the cupboard full of sun ripened and tasty fruit waiting to be consumed when the winter mornings are cold and dreary.

In addition to this, jam production has also been completed for the summer, and we had so many blackberries this year that we did yet another run of blackberry jam. It tastes superb on freshly baked bread.

The stone fruit season is coming to a close (with the exception of some varieties of plum). This morning in the heat we walked around the orchard and nabbed the remaining stone fruits before the heat tomorrow causes them to ferment. This fruit will be consumed at breakfast time with home made toasted muesli and yoghurt.

In prior years we have had a lot of trouble growing peas. Most instructions relating to this plant suggest that it is a winter crop, however when trialled in earlier winter seasons, the pea plants die. Turns out that in this area, peas are a summer crop. And they’re very tasty and prolific.

We may have another good Kiwi fruit harvest come late Autumn and the vines are full of slowly ripening fruit.

Another late autumn fruit is the Persimmon, and they are a very reliable fruit tree.

The warmer weather this week has finally produced the first few corn tassles:

The two ginger tubers have sprouted and are beginning to grow shoots. This plant can only survive here in the greenhouse.

We’re also trialling some sugar cane in the greenhouse, and so far it seems to be doing what it is meant to be doing.