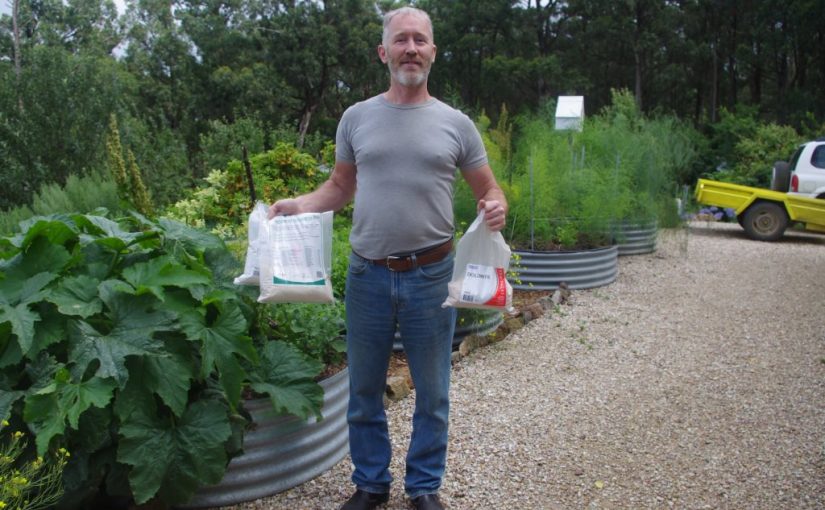 Eventually the dogs owners had heard enough complaints from the dog. The scruffy terrier waved goodbye to his only cat friend and was relocated to a real farm with real proper bouncing marsupials.

On arrival at the farm, the scruffy terrier met three other dogs, two of which were also smaller dogs. The scruffy terrier hoped that he would become best friends with the two smaller dogs. Upon seeing the new comer, Scritchy the terrier turned to her mate Toothy the dachshund, and may have been heard to say something like: Yeah, fresh meat. The enthusiastic scruffy terrier looked at the inscrutable small white terrier and asked: “Did you say something? (to no reply from Scritchy) No matter, I’m so happy to be here”.

The three farm dogs cautiously welcomed the enthusiastic new comer who was re-named then and there: Scruffy. After a few days Toothy the dachshund offered to show Scruffy around the territory. The two dogs went off on an extended adventure and disappeared for a day in the surrounding forest. Upon returning back to the farm, Scruffy learned the meaning of the word consequences. It was a word that Toothy already knew all too well, but ignored (to Scruffy’s misfortune). As well as learning about consequences, Scruffy learned that Toothy was not to be trusted. Scruffy learned this hard lesson, made his apologies and was careful to avoid Toothy’s wiles in the future.

As Scruffy was a newcomer, he was fearful that he’d be voted off the farm. This lesson would have been an especially hard blow because somehow in a matter of mere days, he’d managed to acquire three separate bedding arrangements. To the new owners Scruffy had plenty of charm to spare, which meant that he was sleeping inside the house, unlike the other dogs.

Poopy the Swedish Lapphund was a dog who kept his own counsel. He observed Scruffy from a distance and watched the hapless Toothy play his dirty tricks. Poopy had also fallen victim to the machinations of Toothy, and so he knew well how the episode would play out. He bided his time.

After a few weeks, Poopy said to Scruffy: Mate, forget about those two small idiots. Do you wanna learn how to be a proper farm dog? Scruffy was over the moon at the offer, as having Poopy for a best mate and mentor sure seemed better than hanging out with a city cat. The two dogs became best mates.

Poopy showed Scruffy how to be a farm dog, and the two dogs spent their days hunting rats and rabbits, and chasing off proper bouncing marsupials. Happy days for the two dogs. Scruffy in particular enjoyed eating the rabbits the dogs hunted.

The two dogs performed many valiant acts and deeds over the years, and were eventually knighted for their services to the farm. Sir Poopy and Sir Scruffy they became, and the two smaller idiots could only look on in awe and envy.

Time however has an awful way of progressing, even when you have a best mate and can be a proper farm dog. Sir Poopy became sick and passed away and was much missed. Sir Scruffy sat by his graveside knowing what fate eventually held in store for him. Shortly thereafter Sir Scruffy joined his mate.

Without the two valiant dogs roaming the farm and hunting the rats and rabbits, the rat and rabbit populations slowly grew. And that occurred despite the introduction of newer and younger dogs on the farm. It wasn’t long before rabbits were bouncing through the orchard more frequently than the bouncy marsupials.

One thing a rabbit likes doing is digging holes for their underground party houses. I’m guessing a lot of activity goes on in such places, because another thing rabbits like doing is producing even more rabbits. And then more holes were dug into the garden beds and somehow even more rabbits appeared. The newer and younger dogs chased the rabbits, but for some reason the newer dogs enjoyed the chase more than the ending, and as anyone with any sense knows, rabbits are way fast.

The owners of the farm looked on in dismay, and hoped the newer and younger dogs would soon rise to the challenge. There was also the vague hope that something would turn up to eat the rabbits. Owls hunt the orchards at night and they’re partial to rabbit and have the skills to catch and eat them. Foxes also feed upon rabbit, but it is true that chicken is far tastier and more nutritious than rabbit, and the average fox probably knows this.

The size of the rabbit population was becoming alarming and so it didn’t take too long for something to turn up and eat the plentiful baby rabbits.

An Eastern Brown Snake forceably evicted the rabbit occupants of an underground rabbit party house, and then began hunting the baby rabbits. The rabbits were easy feed for the snake, and without the holes in the garden beds, which the rabbits had dug, it is unlikely such a deadly snake would choose to reside on the farm.

Unfortunately, the ‘world’s second-most venomous land snake’ was a step too far, and the owners of the farm resigned themselves to hunting the rabbit population to extinction.

And then out of left field, a mysterious cat began hunting the rabbits. It is now rare to see a rabbit on the farm, and the pesky critters have lost their previous devil-may-care attitude. When observed, the rabbits are mostly running for their very lives, as was the case when Sir Scruffy and Sir Poopy were still around.

The entire chain of events was entirely unexpected, but it occurred over many years. However, the future is unclear to me and I do wonder what the cat will hunt, once it has decimated the local rabbit and rat population?

The weather has swung from cloudy and warm to summer storms. During the brief interval in the rain, we excavated by hand a further four feet of soil from the new shed site up above the house. Observant readers will note that the steel rock gabion cage which retains the soil at the end of a garden terrace is rapidly filling up.

A number of people have made comments over the years which suggest that Peak Rocks is not in fact real if only because we seem to to be able to continue filling the rock gabion cages with rocks sourced from the farm. This comment entirely misses what the concept of Peak Rocks means. The concept does not mean that we have no rocks, as the truth is far from that, we have plenty of rocks. However, the easy rocks have all been extracted and now we have to dig for new rocks, break up larger rocks into smaller rocks, or go further afield to source rocks. All of those options are not impossible, they are just far harder work, and require much more of our energy. So yeah, Peak Rocks I’m sorry to say is very real.

The soil excavated from the new shed site was moved to another location on the farm where it is being used as fill to construct a new low gradient path leading down into the orchards.

Observant readers will note in the above photo that there are now several very large rocks. The rocks were moved from further afield and they will be utilised in that project as a second layer of rocks so as to retain soil and create flat land. The flat land will be used to store firewood whilst it seasons (i.e. loses the sugars in the timber) outside in the weather.

Over the past few weeks I have been reading a book by the author Steve Solomon titled ‘Growing vegetables south of Australia’. Steve was originally in the Pacific North West of the USA where he ran a seed business, before moving to the island state of Tasmania. For people living in similar conditions, and that includes the farm here, the bloke sure has a lot to say. After reading parts of the book I had an urge to purchase some soil minerals, and most of these I found at the local stock feed business. The reason they were found in the stock feed business was, and here I’m guessing, is that the local paddocks are possibly deficient in these minerals and the livestock needs the mineral additives for their continuing health.

The tomatoes are being grown on soil which is less than two years old and so I decided that they needed the bulk of the minerals.

Tomato plants have a habit of crawling all over the ground. Many varieties of tomatoes are a vine after all. We added a temporary fence on both terraces so as to force the tomatoes to grow higher. The fencing will make it easier to walk around on the terraces and also possibly lift the fruit off the damp soil.

Despite the cool and rainy summer, some of the tomato plants have produced fruit. None have yet ripened, but who knows what the next few weeks will bring?

This week many of the pears appear to have ripened.

The parrots and currawongs have a love for elderberries and most of the crop are grown for them. We use the flowers of the plant for producing elderflower wine and so make no use of the berries.

Zucchini’s (courgettes) are producing fruit and we consume the flowers stuffed full of a very yummy filling.

91 thoughts on “When Scruffy met Poopy”