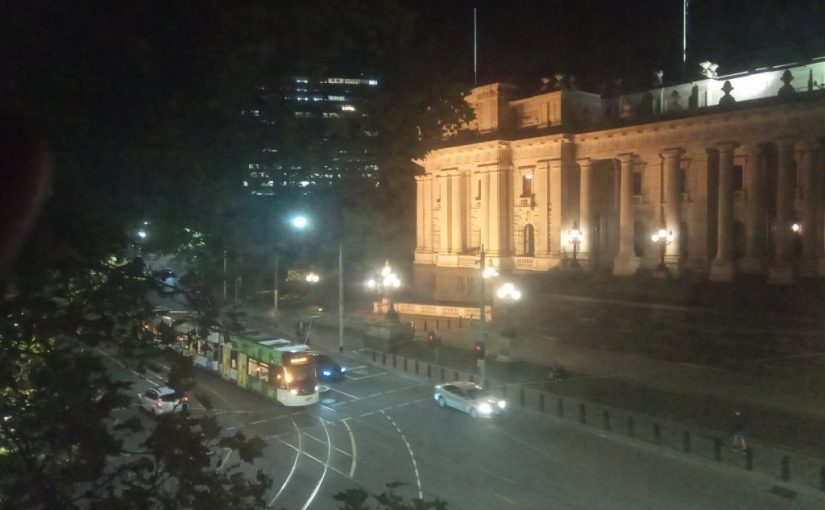 Last Thursday the editor and I travelled in to the city in order to see the stand up comedian Michael Hing. He’s really funny, and whilst much of the show revolved around mental health issues, he kept me laughing for a solid hour. Who knew that death threats and mental health concerns could be funny – but they were. Michael Hing is of course fortunate to be visiting the city of Melbourne for the comedy festival. He is a resident of the city of Sydney which is in the next state to the north. And being a Sydney-sider, he could observe with impunity that after the four month hard lock down last year due to the health subject which dare not be named, visiting the city of Melbourne was like encountering five million people with PTSD! Yes, very amusing.

The editor and I stayed overnight in the city. We enjoy walking, so we drove in from the bush and parked the car about 4km / 2.5 miles out from the city centre. The hours long walk was very pleasant, and the journey travelled through the back streets of the inner suburbs. The suburbs are filled with Victorian era housing dating back to the mid to late 19th century. After a century and a half, the old and candidly small workers cottages exude their own individual character. A sensitive soul can observe the houses and glean something of their history and current and former occupants.

Developers strive hard to make their mark upon those old inner suburbs, what with the developers preference for high rise apartment blocks. I was surprised to see many building sites still constructing. The large cranes were highlighted against the blue autumn sky much like a petrodactyl about to strike its prey. I suppose that funding and approval for these things had occurred in the pre-super-crazy-hard-lock-down last year. Hopefully for the developers they know something I don’t know, because the other day there was some news article which suggested that population growth down under had declined.

Anyway, the walk into the city centre takes about an hour, and at this time of year it’s beautiful. We wended our way through the back streets and hardly saw any traffic to speak of. The people we encountered were just doing their thing. Some walked their dog and/or kids. Others hung out at the small local parks which dot those suburbs. As it was later in the day, it was a pleasure to see people enjoying a drink with friends at their local pub.

The hotel is at the top end of the city, and it too dates from the 19th century. The elegance of the establishment always leaves me feeling a touch bashful, almost as if some formal world had been miraculously opened, and I’d been allowed in. Others can have their glass and chrome modernity, it is formal elegance for me.

The room had a lovely view onto the former state mint, and the current state Parliament building. Early on in the nations history, a whole lot of gold travelled through the state mint on its way to London. And the state Parliament building once housed the country’s federal Parliament, if only because nobody had gotten around to constructing the building which would eventually house the national governing body. Possibly we should have kept those federal politicians close to hand because the rumours and stories circulating about their current activities do not present them in a good light.

Having had to do paid work earlier in the day, we were a bit pressed for time and an early dinner was required, before the later comedy show. Once again walking upon the streets of Melbourne, we walked passed a group of work mates enjoying a drink at a pub after work. The large group were seated at a street table on the side walk. Their attire gave away the origins of the group and for some reason my mind settled on public servants who possibly worked in the IT department. They were having a lovely time.

During the walk from the hotel to the restaurant we passed the Salvo’s building which appeared to be shuttered and dark. Usually outside the building is a cast of characters who are a bit down on their luck, but mostly harmless. This time around, we encountered a lady in her forties who was cackling to herself whilst throwing food. I was grateful that we weren’t targets for her amusement, but then the editor does have a truck-no-nonsense look about her from time to time.

Our destination was Hardware Lane, which back in the 19th century unsurprisingly contained a large number of hardware vendors. Nowadays the lane is closed to vehicular traffic and has been turned over to restaurants with outdoor seating. An enjoyable meal was had, but I did notice that the bloke who used to serenade the seated crowds with his guitar work, was nowhere in evidence.

The enjoyable meal was candidly excellent and whilst the editors attention was elsewhere as she people-watched, I managed to steal a number of fork loads of seafood paella. Snoozers, after all are losers, and when at table a person must keep their eye on the prize. Tiramisu is a favourite dessert, and upon completion of dinner I inquired of the waiter whether they still had the ‘tiramisu’, and could we share a serving? The waiter who had already casually quizzed us as to our reasons for the trip into the city, recognised that this was a question asked by a person who had visited the restaurant before. And the tiramisu was supplied with a complimentary limoncello. You could hear the siren song call of: “Come back! Come back!” It’s true, I’m cheap and can be easily bought by such niceties!

After dinner we walked back to the comedy show where we laughed for an hour. The comedian was so cool that he hadn’t quite worked out how to conclude the show, and said as much before walking off stage. How cool is that?

On the way back to the hotel, the group of IT friends at the pub had now dwindled to two. One of them was clearly heard making the challenge: “I’ll have one, if you do!”

The next morning we walked through the city so as to enjoy breakfast at a lane way cafe in The Royal Arcade. Along the way we passed many large skyscrapers which looked as if the lights were on, but I was hard pressed to see any signs of activity inside the buildings. Many shops were empty, and ‘for lease’ signs were ubiquitous. At the beginning of last year, the city was bustling with people, nowadays there are plenty of people around, but nothing like the crowds back then.

Ordinarily the mornings are rarely in focus, and generally I shouldn’t be allowed out in public before first supping a decent cup of coffee. However, exceptions must occasionally be and this was the case that morning. Fortunately, a decent coffee was eventually obtained, along with breakfast. The editor and I could then enjoy meaningful conversation and general people watching.

The opportunities for the sport of people watching was lesser than it had been in previous years, merely because there weren’t as many people about. Many of the lane way cafes have touts standing at the front enticing customers. I noticed one old bloke loudly engaging the tout in unsought-for conversation. My thinking was that he was scaring away potential customers, and fortunately for the business he moved on.

All good things eventually come to an end, and we finished up breakfast, returned to the hotel, and walked out of the city again.

The walk back out of the city was in cool but sunny weather, and along the way we encountered a bloke in his sixties who had the longest beard that I’d seen in a long while. With such a beard, he could easily have been in the rock band ZZ Top, but perhaps he was just an older biker. The other reason the bloke was notable was that he was walking an American bull terrier. Most people are afraid of such large dogs, but the dog made a bee-line to us and just stood there demanding a pat. Yes, very scary. The owner was dubious of us, mostly because we didn’t look like outlaw bikers, I’m guessing. But once we mentioned that we owned a Bull Arab, the guy transformed and we had a lovely conversation. But we couldn’t speak all day because Ollie the Bull Arab and his two lady sheep dogs were waiting for us at home, and they’re lovely.

The weather which we enjoyed during our brief foray into the big smoke was very pleasant. However, earlier in the week two atmospheric rivers converged over the east coast of the continent and dumped a whole lot of rain. The city of Sydney in the state to the north of this one, suffered a bit of flooding, and other parts of the coast enjoyed almost three feet of rain.

Fortunately there was no flooding in this corner of the continent, but there was a lot of rain. However, a bit of rain doesn’t stop the juggernaut though, and we set about breaking large rocks into smaller and thus more easily moved rocks.

The now smaller (yet still quite large) rocks were loaded into the yellow power wheelbarrow and then driven down to the low gradient ramp project.

The wheelbarrow makes the job easier, but it is still hard work. We lost track of the time and worked far later than I’d anticipated. By the twelfth rock, the time was around 3.30pm and lunch had somehow been missed. I was feeling a bit tired and the last rock got away from me and put a small dent in the bucket of the wheelbarrow. Then with the same rock, whilst reversing the laden wheelbarrow in a tight spot, I tripped one of the wheels on an unseen rock sticking out of the ground. The wheelbarrow toppled over, and the rock fell out. There were no injuries, but we have now set an upper limit finishing time of 2pm.

The second layer of rocks on the low gradient ramp project has now almost been completed.

The rock retaining wall for the utility area is also progressing.

From some perspectives, the project looks like a breakwater.

Burn off restrictions were lifted on Monday morning and it appears that there was a bit of pent up demand. Actually, burning off is an excellent land management technique which reduces the severity of out-of-control bushfires and gets minerals back into the soil.

The greenhouse is being used to grow some sub tropical plants which hopefully will survive the winter months. Last week the ginger tubers were re-planted in larger pots.

And miraculously, the sugar cane doesn’t appear to have died – yet.

47 thoughts on “The lights were on”