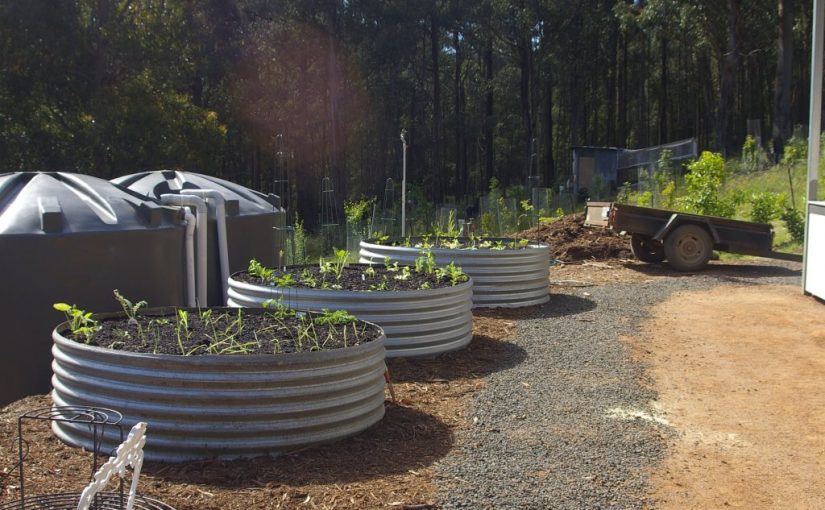 It’s been almost a decade since I can recall a summer which was as cold and wet as this summer. And that one also followed on the year after an epic scale bushfire. Way back in 2010 was one such year and 1437mm, or 56.6 inches of rain fell over the farm. I’d never imagined that so much water could fall out of the sky in such a short period of time. There was water everywhere, and during one notable five day stretch of rain, 250mm or 10 inches of rain fell. It was a bonkers year weather wise, but we muddled through somehow.

During that now seemingly long ago wet year, we were still constructing the house, so vegetables and the orchard barely rated a thought. In fact looking back at the photos of the growing plants from that time, the editor might suggest if that was the case today, I’d be having a major freak out! This is what it looked like almost a decade ago:

Long term readers will note that the hard working trailer in those days sported a tidy rusty steel colour which has long since been upgraded to the present slick bright yellow colour. Plenty of people over the years have exclaimed at the sight of the bright yellow colour, and it is nice to hear the admiration in their talk, although I doubt they would follow suit and paint their own trailers that colour.

Observant readers would also notice that just on the far side of the rusty coloured trailer, there were many tiny fruit trees in the newly planted orchard. None of the fruit trees in those days were more than about four feet tall. Here is a closer view of the slowly growing orchard from those early days.

Back in then there was no top soil to speak of. And even after two seriously wet years in a row, the orchard had hardly any grass to speak of. And the trees were really slow growing. You can see that early on in the above photo as each fruit tree had a hefty ring of composted woody mulch surrounding it. Trees of course require the minerals from dead trees in order to grow, and composted woody mulch was very cheap in those days. A cubic metre (or 1.3 cubic yards) cost under $20 to purchase, and we applied the stuff over the property with abandon. Over the past decade the price has almost doubled, but people still tell me with a straight face that inflation is negligible.

Writers are often also voracious readers, and such was the case with myself. Way back in those days I had no idea at all about growing plants, but I’d been reading about an intriguing concept called: ‘A food forest’. It is a complex idea, but basically it involves a diverse planting of edible plants which attempts to mimic the ecosystems and patterns found in nature. It is also described by the term ‘forest gardening’. It sounds like a good idea, in theory.

Being the rapscallions in charge of this juggernaut, the fascinating theory was soon put to the test in the orchards. Various herbaceous plants such as Alkanet (a Borage plant which grows really well here) were planted in the orchard. Even a vine layer was established in some areas. And sure enough with all the feeding and planting, and despite the occasional seriously hot and dry year, most of the plants all grew. But what happened next was what interested me.

The land here is in a very cool temperate mountainous location. Perhaps the food forest theory works in parts of the planet with more moderate climates than here. I can’t really say for sure, but implementing the dense plantings on this farm has produced some benefits, but also considerable downsides. And it is an act of wisdom to know when to abandon an idea.

Recently a decade old Eureka Lemon tree succumbed to collar rot. The disease is due to some sort of fungi-like critter, and the result is a dead fruit tree. The critters consume the bark of citrus trees, and they eventually ring-bark the tree. Planting support plants around fruit trees is encouraged in forest gardening, and it may provide additional minerals to shallow rooted fruit trees such as the citrus trees. But it also turns out that the increased humidity around the trunk of trees in this environment, also increases the likelihood of plant diseases. Some concepts just don’t translate to all locations I guess.

Did I mention the rats? At night the many owls living in and around the farm hunt rats which are foolish enough to be caught on open ground. But in a food forest with all that dense planting, the rats can simply wander about under the protection of the dense plants with impunity. And rats are also clever enough to climb fruit trees and eat the fruit. That had to stop.

From what I’ve observed, the trees have not enjoyed the competition for minerals and water which occurs in dense plantings at this location. And candidly some of those trees have been very slow growing. Last week I removed the wallaby (a local forest dwelling marsupial similar to a mid-sized kangaroo) proof cages from around some of those slow growing trees. The surroundings were then cleared and the trees enjoyed a solid feed. Time will tell whether this strategy works.

Not all the fruit trees are growing slowly. Those growing down hill of the paths of the locally quarried crushed rock with lime, appear to be growing quite well. So removing the supporting plants from around those fruit trees will further reduce the competition stress, and hopefully the plants can get on with the job of growing and fruiting.

As part of the whole food garden thing, we also trialled a vine layer in the orchard. And the passionfruit vines have frankly been a bit of a nuisance. The other day I removed a passionfruit vine which was strangling an otherwise healthy native lilly pilly fruit tree. Those native trees are meant to be as tough as old boots, but passionfruit vine sure appeared the tougher of the two plants.

Who knows, perhaps the food forest concept was poorly executed here? But whatever the case, I’m now going back to what the old timers used to do, which is to allow for air around the trunks of the fruit trees. In addition to that I’ll continue bringing in plentiful mineral feed for the soil and trees. Where we have implemented such a regimen, the fruit trees grow rapidly and produce fruit. The other areas of the orchard, not so much.

Summer dropped by the farm for a cameo appearance this week. There were five days in a row with sunny skies and temperatures hovering around the 25’C / 77’F mark. It was all very pleasant. The skies were a bit smokey due to the state government finally getting around to doing its job of burning off some of the local forest.

The large rocks which were liberated last week from even larger rocks, were relocated and then added to the low gradient ramp project. The rock wall is starting to look like a breakwater!

Another day of excavating clay took place on the future machinery shed site up above the house. We’ve sure moved a lot of soil over the past few months.

All of the soil is being moved down the hill where it is being used as fill on the low gradient ramp project and also the flat utility area which is at the top of the ramp. The utility area is becoming quite long and flat.

And each week the low gradient ramp becomes wider and more usable. However, there is still a huge amount of excavations, hauling and rock breaking work before those jobs are complete. These concurrently executed projects are extremely satisfying.

With the cold weather the tomatoes are growing, however they are really slow to ripen. There is a bit of concern that the recent rains will split fruit which has not yet ripened. Oh well, you do what you can do, and we have harvested any fruit that is ripe or close to it, and then dehydrated them and stored them in olive oil.

Some plants have adored the cold and rainy weather, and berries are one of those. It has not been hard to pick blackberries and raspberries and enjoy them for breakfast. We have preserved an incredible quantity of these berries in jams and wines.

The European honey bees, like most insects, just get on with their work, rain, hail or shine.

49 thoughts on “Sounds good in theory”