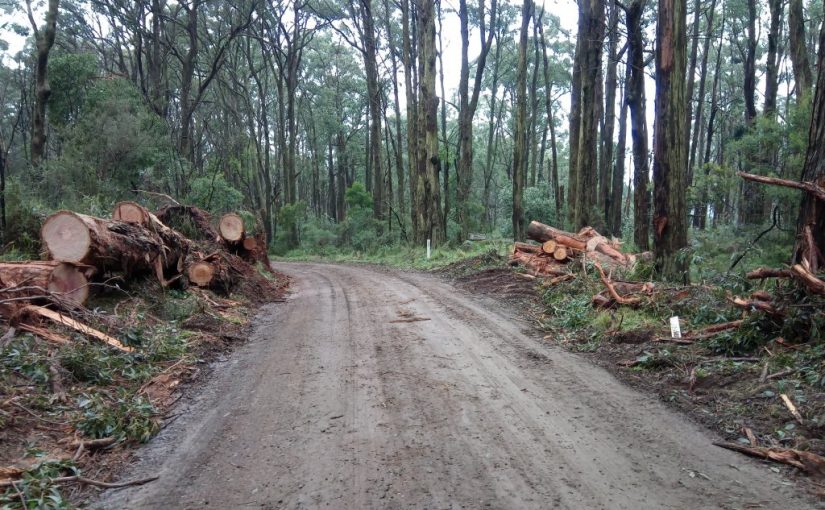 ‘Are you heading to Daylesford’, she asked? ‘Nope, we’re heading to Blackwood’, came the reply. ‘Where’s that?’ Ah, a city slicker enjoying a day of work in the countryside. The blonde haired young lady on traffic management duties standing in the centre of the road was holding a large stop sign and certainly looked very cheery to me. Well she should be – I’ve heard that they earn more than the editor and I do combined. Clearly we are in the wrong occupation.

However, on the day, we were on the right road, and hoping to get to the small town of Blackwood. The young ladies pink suede work boots offset her yellow high visibility jacket quite nicely, and I’ve noticed of late that road crews tend to hire personable young ladies to do the traffic management job. As a strategy it probably isn’t a bad one.

Years ago I volunteered as a fireman in the local volunteer fire brigade. A large tree had fallen across a nearby road, and I recall assisting clearing away the detritus from the road so that the traffic could then pass. It was a notable experience because some numpty from within their vehicle was suggesting that we should hurry up because they were in a hurry. It is a weird feeling to be heckled whilst helping out the very people who are heckling you (and as a volunteer!) But of course, I’m a scrappy old fella and not a personable young lady, so perhaps this explains the heckling? Who knows?

Anyway, once the editor explained to the personable young lady doing traffic management where the town of Blackwood actually was, she directed us down a small country lane. The main road of course, was closed due to the many fallen trees. There’d been an epic storm in the days leading up to the road block, with high winds and unnecessarily huge amounts of heavy rainfall, and so trees have been toppling all over the region.

We never made it to the town of Blackwood that day, although we got close. About 12km (7.5 miles) from the town we had no choice other than to turn around and head home again. No matter, the trail of destruction which the storm left was amazing to see. The storm was bad here, but it was worse over there.

The mains electricity grid has been out for several days in this area. This meant that there was no power to the local pub on Thursday night. However by Friday night, the local pub managed to have had its electricity supply reconnected despite other parts of the mountain range being without power for many more days. It was a thoughtful act on behalf of the electricity distribution company, and so the editor and I ate there on Friday night. At a nearby table, a young couple were also enjoying their meals whilst their phones were plugged in to the wall socket and charging. Their actions piqued my curiosity, because who takes a phone charger with them to the local pub?

The house here is not connected to the electricity grid, and never has been, so the lack of electricity all around us occurred without us even being aware of it. However, we had no easy ride either because the two worst days of the storm produced only about 15 minutes of peak sunlight for each day. And the components in the off grid power system greedily consumed all of that energy for its own mysterious inner workings, leaving us with not much power at all. Whilst other households were without power, we watched as the batteries sunk to below 50% charge. The decision was made to haul out the petrol generator. That was when we discovered that the battery charger was not quite useless, but was close enough to useless.

After nine hours with the generator noisily chugging away, the machine put an insignificant bit of electricity into the batteries. With all of the noise, the editor had a headache, and after the days work was done I began investigating replacement battery chargers. A decision was soon made and the replacement device was ordered which set us back a bit over a thousand bucks.

Renewable energy is a good technology given that we had electricity during and after the storm when nobody else in the area appeared to, so comparatively it’s pretty resilient. But it is also hideously expensive. Which is why it is an oft spoken about, but rarely seen beast. The only reason you’d go this off grid route is because you want to make a difference to the environment; the resilience aspect appeals; or you’re just a rugged individualist wanting to go your own way – or a delightful combination of the three (like us!) But if finances were a primary concern, you would never consider going off grid in the first place.

It always intrigues me that I’ve never encountered another person who suggests that their primary motivation for actually installing renewable energy technology for their home was that it would be a good thing for the environment. It is possible that I need to get out more, but even so, people talking about this technology usually speak in terms of how much mad cash they’ll save if they install it. And mostly they install the cheapest iteration of the technology (i.e. remaining connected to the life saving umbilical cord of the electricity grid). Such folks act like gamblers when they report upon the wins, whilst ignoring the losses. It’s a crazy worldview, but it is commonly enough seen. The Green New Deal folks I’ve heard about are probably just like that too, and if I’d encountered one of them, I’d ask the hard question: So what are you going to do for electricity at night when the wind isn’t blowing and you’re in the middle of a drought?

Fortunately for us after the storm passed the sun eventually shone and the batteries soon made their way back to 100% full. However, the storm really was extreme in this corner of the continent. We had about six large trees and many more smaller trees fall over.

The high winds and heavy rainfall even knocked a few fruit trees over. Some of those fruit trees I’ll prune and then relocate. Others like the Australian round lime in the next photo, I’ll probably remove.

Observant readers will note that the citrus tree in the above photo has succumbed to a disease known as collar rot, and having been underwater for two days during the storm, the health of the tree would not have improved. It is actually impressive to be on the side of a mountain saddle, and have the soil completely and utterly saturated. There was so much water falling from the sky, that there were even standing puddles of water for a couple of days – and that never happens.

One of my favourite tree species (Acacia Melanoxylon or Blackwood) is very well adapted to swampy ground, but even one of those species of trees now appears to be almost about to topple over.

The water from here moves downhill where it flows into a creek at the bottom of the property, and from there it flows into the local Macedon River also known as Riddells Creek. From this height I could see that the water course had swollen and burst its banks, and fortunately the well run farm down there had already moved their cattle to the higher ground well beforehand.

Eventually the storm passed and some sun began to shine again.

Work this week involved cleaning up the fallen branches and leaves, and there were a lot of them. It is impractical to chip up so much material, and so it was collected and burnt off.

The burn off of the materials took an entire days work. And the large fallen trees weren’t even touched. Those trees will eventually be cut up and split for firewood, but there is no hurry to do that job as such materials have to season (reduce in moisture and sugars), and so the firewood won’t be ready for use for a couple of years regardless.

Other people in the area were also burning off and I remarked to the editor that this is perhaps what Mordor may have looked like:

One final word in relation to trees. An old timer once imparted a few words of wisdom in relation to trees. Firstly – have no large trees within dropping distance of your house; and Secondly – they never get smaller. Wise words, and despite the best efforts of the storm, the house and its infrastructure lives to fight another day.

It is only a week and a bit to the winter solstice, but the recent heavy feeding of the Globe Artichokes means that they are continuing to produce tasty chokes. Such a tasty vegetable.

65 thoughts on “After the storm”