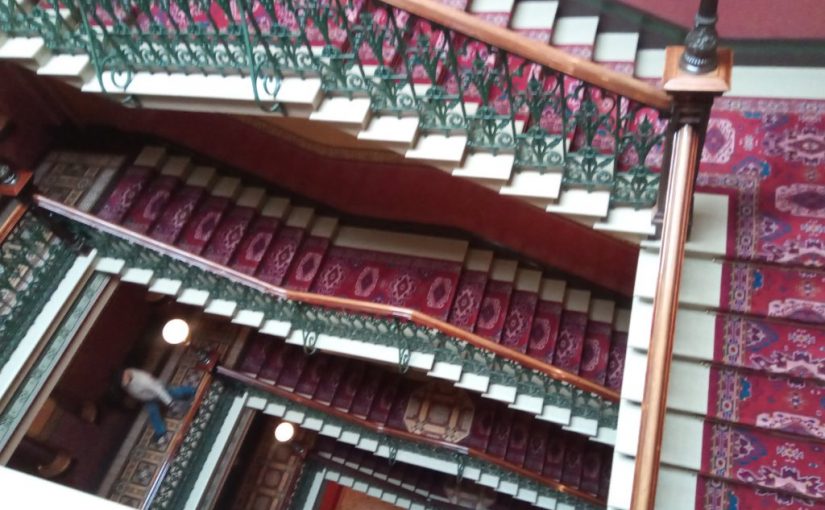 It was common knowledge that at midnight of the day we ventured into the city, some restrictions pertaining to the health subject which dare not be named, were intended to be lifted. Of course, not all of the restrictions were to be lifted, it was just that we were no longer required to wear masks when walking around outdoors in the fresh air – even when nobody else was around.

That night there was a bit of police presence in the city, but I ignored all that and instead noticed the row of five empty shops, or the ubiquitous ‘for lease’ signs hanging from building facades. Long ago I read that empty shops are like a cancer, in that they spread. There sure must be a bit of cancer in the city.

We had a lovely dinner in a very touristy area, but couldn’t but help note that there were at least as many staff as there were customers. The place was a ghost town. This has not always been the case, and in previous times not all that long ago, the placed rocked with people even in the depths of winter. The unfortunate side of our profession is that the editor and I see the underlying realities with businesses, and there are few businesses which can have more staff than customers. Of course there may be the occasional notable exception to this rule.

The editor and I love to walk around and it is our preferred sport. Some folks enjoy the sport of swimming, others prefer the gentle sport of riding bicycles upon country roads in packs of angry males where as a bystander, you can’t quite see the testosterone, but you sure can smell it. Instead, we prefer the slow pace of walking. You can take in the vibe of an area at the slow and measured pace and that is when you notice things.

One thing I observed whilst walking around were three separate incidents of people driving brand new Bentley’s around the cities streets. It sure must take a lot of mad debt, or a whole bunch of mad cash to own one those vehicles, but whatever the case may be, it is not for the likes of you or I.

Years ago I read a series of fictional books by the author Jeff Lindsay. The author penned a series of books following the adventures of the likeable psychopath: Dexter. It is worthy of note that the character was probably incapable of forming emotional links to the other characters in the book because (in the book Dexter is Dead) when considering his own children he posited the thought:

“There are millions of homeless children in the world—which proved again that kids were a low-value commodity, didn’t it? I mean, there are very few homeless Bentley’s in the world.” (A quote from the excellent book Dexter is Dead by the author Jeff Lindsay)

There are times that I really do wonder what sort of world we are leaving behind for those that follow after us. It is very possible that the choices we as a society are making today, don’t reflect all that well upon us as a civilisation.

Regular readers will recall that last week this corner of the continent was hammered by an epic storm which had swept up from the frozen continent of Antarctica. My neighbours were without electricity from about Wednesday to Sunday lunchtime. But spare a though for the people living on a nearby mountain range to the south east of here, as there are still about 3000 homes without electricity. The talk in the media has been that that state of affairs may continue for a month, although my opinion is that this target is rather ambitious.

In another part of the state, a coal fired power station which apparently supplies a quarter of the states electricity is having a few problems due to the storm: https://www.abc.net.au/news/2021-06-18/scramble-to-solve-yallourn-mine-flooding-threat/100226204 The Yallourn plant is scheduled to close in 2028, which I believe is four years early: https://www.abc.net.au/news/2021-03-10/yallourn-power-station-early-closure/13233274 but according to the article, at least the 1,450MW generator will be replaced by a 350MW battery.

Now math is not my forte, but certainly 1,450MW supplied 24 hours per day looks very different to 350MW supplied for an hour (noting that batteries are usually measured by their maximum energy output over a period of an hour). And when the battery needs to be recharged, it too becomes just another user of the electricity that is generated. Maybe the difference is just semantics on my part, but then again maybe it isn’t and with over a decade of experience living in a household powered by batteries and renewable energy technologies, I’m not necessarily sanguine that the promised future is going to look like what the bright green ideologues believe.

But basically, changing the supply and delivery of energy to people and households, fundamentally also impacts upon the underlying social arrangements. Take for example a theoretical super cloudy and not particularly windy winters day: if we relied entirely upon renewable energy systems, then there might not be enough electricity to go around. Imagine your boss telling you to not come into work today because there is not enough electricity to run things, and by the way don’t expect to get paid either. The unfortunate person who now looks forward to a day at home with no pay, has no money to spend, and so that further reduces the economy. And modern economies rely upon the mad cash to keep on flowing around whilst it moves from person to person. It all kind of reminds me of the quiet scenes I observed whilst enjoying breakfast in the city the other day:

I could pontificate upon the woes of our civilisation, or provide a list of future action plans but – boring. There’s an Indian bloke who works at a petrol (gas) station whom I’ve spoken with for years, and the other day he summed up the situation nicely when I asked for his thoughts upon the current state of the world: “Yeah, it’s going to get really busy again. Then it will get really quiet again.” Very droll, but also very insightful into what an intermittent economy actually looks like on the ground.

Sunday morning was super frosty in the valley below the farm. In fact it looked as though the cold air had sucked the very colour out of the world.

The project creating rock lined paths in the garden terraces is now completed. This week the highest garden terrace received well over a cubic metre (1.3 cubic yards) of the locally quarried crushed rock with lime. It is a really nice surface to walk on during these sorts of cold and damp years, and additionally the lime from the paths will greatly assist the vegetables growing or set to grow at some future date in the rows.

Getting the crushed rock up to the highest garden terrace meant driving the power wheelbarrow through the newest orchard. And there has been so much rain that the ground is very saturated there.

We’ve also begun widening the path which is on the downhill side of the cantina shed. It is a complicated project because there is a water tap in the garden bed which needs to be relocated.

The Fluffy collective are stoically enduring the cold and damp winter conditions, and Ruby the sheep dog has been known to treat Ollie the fearsome looking but very gentle Bull Arab, like a personal heater.

I’ve often been asked to include images of some of the interesting things which I observe during the week, and so here goes:

53 thoughts on “Never gonna be expectational”