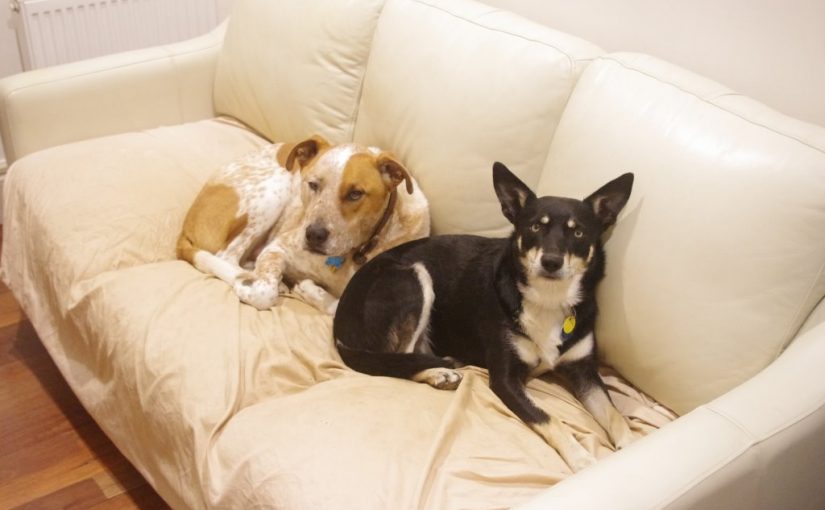 The following extract is provided as a Fernglade Farm guest post:

Thwack! Chris had cracked the door open, reached into the room, thrust downwards, and come into contact with a Kelpie’s head. The feeble rays from the early morning sun had inspired Ruby to wake the household up extra early. An error of judgement! Ruby may be the alpha dog, but she is not the household boss.

Another alarmed looking Kelpie sat on the couch with her best mate, Ollie. Plum’s face clearly stated for the record: “Chris, Ollie and I had nothing to do with this. It was all that super bad bitch, Ruby.” The facts in this instance, spoke for themselves. The door was closed and peace once again reigned over the household.

Once the door was closed… Plum: “What the hell is wrong you, girl?”

Ruby: “Am so. Just because you don’t have any confidence.”

Plum: “Just shut up, I don’t wanna talk about this any more.”

But it was true. Ruby was right. I don’t have any confidence. When Ruby and I were 12 week old puppies, I heard the farmer saying: “Get rid of those two, they’re no good. That one is naughty and the other one is timid.” Lucky for us two sisters, Chris and Sandra bought us, and took us back to their farm. I don’t need to have confidence here, I can just be myself. And Ruby has to curb her naughty streak.

I like living here. Every working day begins with breakfast. I love breakfast, it’s so much fun. The patterns have to be just right. Only the most intelligent Kelpie dogs know how to play the breakfast game. Firstly, a girl must feign polite disinterest in her food. Meanwhile, Ruby and Ollie wolf their breakfasts down, farting and belching all the way – the little animals. Then, just as they begin to notice that my breakfast remains untouched, I nibble a bit here and there. The admiring audience drool over every dainty morsel that I consume, but they dare not take any. The real authority in the household is never far away, and even Ruby has to acknowledge that fact.

By the time Ruby and Ollie have run out of drool, my breakfast is done. All the same I pull my very best super cute face number three (always a winner of a move) and ask the Editor: Got any seconds? Usually I do get a bit of extra food, although I don’t want to push things.

After a bit, the working day commences. I get to follow Chris around. I have no idea what he’s doing, but he always seems to be doing a lot of something. Not being a confident dog, I scout out the area and alert Chris as to any mischief going on. Who can forget the time I found the deadly snake? But I never go far, and every couple of minutes I’ll check back in with Chris, who always gives me a nice pat.

Sometimes the mischief is way to big for me. That’s when my hero Ollie has to do some work. I love Ollie.

Lacking in confidence, Ollie loves Ruby more than I, but that’s OK, I guess. I don’t know what he sees in that little bitch. She’s all legs and tail and stuff. I’m sure she’d make a really excellent mother.

Unlike Ruby, I do work around the farm. Recently Chris announced to Ollie and Ruby that henceforth I was to be known as Dame Plum. Take that Ruby. Ollie said to me months ago that there was work to be done, and Sir Scruffy used to spend his days hunting out rabbits and rats, so why don’t I do that? So I now do that job. And I can only do my best.

I’d heard the stories of valiant Sir Scruffy. He was also something of an excellent kitchen dog, and well rewarded for his services. What the heck, I can do that job too. The rewards are indeed legendary.

A girl likes a dab of perfume here and there, usually around the neck. Maybe Ollie will like me better if I’m appropriately perfumed? I’ve worked out the right balance of perfume that Ollie appreciates, but the humans can’t smell. The humans need a mystery from time to time and I hear them saying: “What have you been rolling around in?”

At the end of a working day, Ruby and I are provided with rawhide chews. I love rawhide chews. And when they’ve been forgotten, I can improvise with firewood. Everyone knows it’s good to turn firewood into kindling. After all, this must be why Chris says to me: “Well that’s frickin useful isn’t it?”

At night I get to sleep on the couch with my hero, Ollie. I love Ollie and feel safe with him. And that’s why, unlike that bad bitch Ruby, I don’t want to wake up early.

Sandra and I visited the Seymour Alternative Farming Expo this week. So much fun! We bought a whole lot of tools, looked at the animals, listened to some lectures, and had some excellent sausages for lunch. It was a really fun day. A bloke who makes a living breeding and training Kelpie dogs was giving working dog demonstrations.

The bloke even had a couple of 12 week old Kelpie pups being shown the ropes by their mum.

One of the Kelpie pups preferred to run out into the crowd for a pat, and that was my kind of Kelpie dog! I said as much to the bloke running the demonstration.

We bought two Buff Orpington chickens from the local poultry groups display and sale. Chookflation is real as they cost $150 for the pair. The reality however, is that compared to the economics of breeding chickens, $150 is pretty cheap.

There are probably nicer ways to introduce new chickens to the flock, but I don’t do that.

It might end up badly, but then again it most likely won’t, and after a few weeks the rest of the flock will roundly ignore the new chickens.

The current big project being undertaken at the farm is the expansion of the greenhouse. Regular readers will recall that in recent weeks we’ve been moving and installing rock gabion cages so as to support the site where the new larger greenhouse will be located. This week, we pegged out the area to be excavated and cut turf sods from the outer area. This will make the job of excavation easier, and neater.

All those turf sods are actually quite useful and can be used as soil building blocks. They were all relocated to where they were used to shore up a slightly too steep section of the path up above the house.

It was interesting to see the development of the top soil in the sods. Originally there was no top soil in the area they were removed from. It was a hard clay pan. Years ago, the area was given an initial deep rip, we chucked on a tiny amount of compost, it was grazed and pooped upon by the wildlife, then any vegetation which grew there was chop-n-dropped. The top soil is now a couple of inches deep.

Here’s one for fans of the dream that renewable energy systems will save industrial civilisation.

For two days the solar panels produced about 6% of their rated output. I was amazed that they produced anything, the fog was that thick.

Despite the drizzle and fog, the usual things that need doing around a farm, got done. Several wheelbarrows of soiled chicken bedding was fed to the orchards. The weeks supply of coffee grounds were mixed with agricultural lime and spread around the orchards. Grass was removed from around the trunks of fruit trees. Wallaby proof cages were removed from some fruit trees. Feral Blackberry canes were cut back hard. And fallen forest material was burnt off. A lot of things have to happen, and you just have to deal with the weather.

The very latest of all the summer fruiting trees are the Persimmons, and this year the tree has produced a good crop.