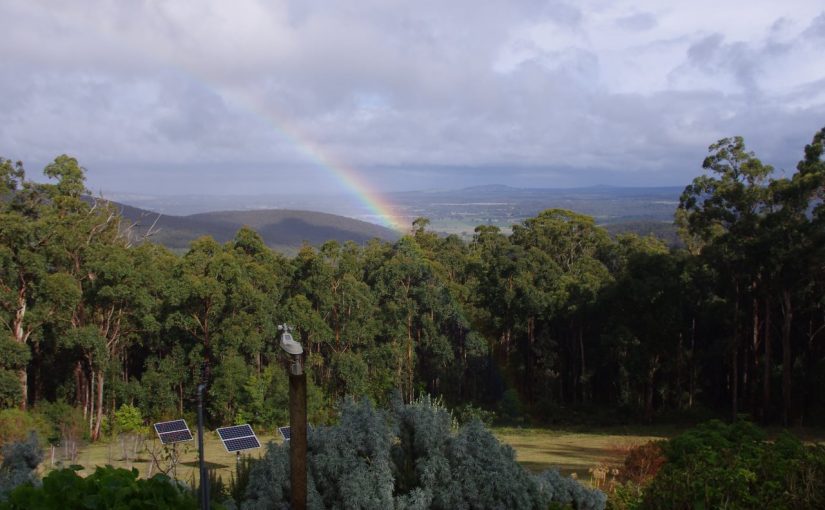 By now long term readers will know that Ollie the Australian cuddle dog (he is technically an Australian cattle dog) replaced the sadly departed Sir Poopy the Swedish Lapphund. Ollie’s duties are exactly the same as the much missed Sir Poopy. I took a quick look at Ollie’s job description and it included a number of activities, including:

Ollie is a busy dog, and he works hard here. In the above photo you can easily see that the farm is surrounded by dense forest. All manner of animals live in that forest. And most of those animals head to the nearest clearing for a feed because there is not much for them to eat in the dense forest. There are no fences between the farm and the forest. Therefore, Ollie is a genuinely busy dog and he performs a useful function on the farm. He also just happens to be a very delightful canine personality.

It is winter here now and the skies are thick with cloud. The rain has been feral this week and the wind has occasionally audibly buffeted the house. The air temperature has not risen above 8’C / 46’F all week. And the chickens are going to bed at about 5.15pm as we are now under a week from the winter solstice. That’s winter.

Anyway, a few nights ago I’d just put the chickens to bed and locked their supposedly rodent proof enclosure. They’d been free roaming in the orchard whilst I was dressed up like the Michelin man with many layers of clothing largely derived from sheep. The sun was setting and it was getting quite dark.

Sometimes I take Ollie with me when I’m supervising the chickens whilst they free roam in the orchard. Chickens live a nervous life up here because there are just so many predators living in the surrounding forest that want to score some tasty chunks of chicken. In the past I’ve fended off fox attacks, but there are also the wedge tail eagles, powerful owls, feral dogs, feral cats etc. Chicken is clearly a tasty morsel, and I enjoy the occasional chicken schnitzel (off-farm chickens). That reminds me that there is an old joke about any unidentified meat will inevitably taste of chicken. Concerned readers can rest assured that this old joke may possibly have some truth because when I visited a crocodile farm in the remote Northern Territory of Australia, lunch consisted of a crocodile burger. And it really did taste like chicken but with the consistency of lamb. I have no doubts that the ferocious salt water crocodiles would like to sample a bite of the editor and I just to form a proper taste comparison! 😉 My guess is we would taste like chicken but with the texture of eagle.

However, Ollie was not with me that evening as the chickens headed off to the safety of their beds. Instead, Ollie was waiting for me at the door to the house. He looked unhappy that I had not taken him with me on chicken patrol duties, but like the gentleman that he is, he took it all with good grace. I was grateful to get back inside the warmth of the house.

Once inside the house, I proceeded to feed the dogs a couple of dog biscuits that I regularly make. The dogs love the biscuits, and Ollie has only ever once dared to steal them from the cooling tray that sat on the kitchen bench. He is quite an intelligent dog and now realises that biscuits that are cooked at 180’C / 360’F can be quite hot, and so now he leaves them well alone until they are dolled out. The lesson here is that exploring the world via one’s mouth can be both an exciting and somewhat dangerous experience!

After Ollie had munched his way through the dog biscuits he then told me that he needed to go to the toilet. Now the dogs have the run of the farm during the day, and the wildlife enjoys free access at night. In such an arrangement nobody is happy, but most of the animals enjoy a decent feed on the farm.

Unfortunately, that evening I walked back from the chicken enclosure, I had not noticed a wallaby in the old strawberry enclosure which is fenced off with heavy duty bird netting. The wallaby had broken through the bird netting and was happily munching on the strawberry plants – and I failed to notice it.

Ollie on the other hand is far more alert to these marsupial matters than I, because once outside, he took one look at the happy wallaby and thought to himself that he was having none of that. At full speed, Ollie crashed through the netting on the strawberry enclosure and the two combatants met and tangled with no conclusion. The wallaby punched another hole through the bird netting and was chased off the farm. Ollie then promptly returned with the happiest expression on his face because he knew who was boss here (dogs can be very self centered!)

Alas for Ollie’s hubris, because early the next morning, the wallaby was back again in the old strawberry enclosure happily munching away on the plants.

The netting on the old strawberry enclosure had to go. But before it went, Ollie took one good look inside the old enclosure to see whether any unwanted wildlife was hiding within…

We plan over the next few months to convert that garden area into an enclosure that will produce pumpkins (squashes) and melons. In the meantime, the marsupials can gorge themselves silly (at night) on the strawberry plants!

Speaking of repairing things that don’t work, this week I replaced the gas strut that holds the back door open on the little dirt rat 3 door Suzuki. The old gas strut had long since given up working and it just never occurred to me to fix it. The major problem with the door was that it used to close of its own accord, often sandwiching me in there. Did I mention that the door is quite heavy? No, well it is!

The replacement gas strut wasn’t a perfect fit and the eye holes had to be modified. Fortunately at Fernglade Farm, we know farm engineering! The drill came to the rescue as I bored out larger eye holes.

After about five minutes of installation, the door lost its self closing feature, and now remains open when that is what is required of it. Happy days!

With a lot of the projects here, I have to bring up supplies to the farm. That often takes a lot of time and I rarely mention it on the blog, but it does happen. This week I topped up my supplies of sand/aggregate mix with which I use to produce all of the cement work about the farm. Materials are usually neatly placed into areas set aside for them (i.e. I don’t leave materials in the trailer).

Despite the heavy rain of the past few days, we managed to construct another step and cover it before the rain could destroy the wet cement. There is actually a stair under all those protective layers…

We also spent a couple of hours dead heading the hundreds and hundreds of agapanthus seed heads and stalks.

And the last of the deciduous trees is losing its leaves this week. The snow pear is usually the last tree to lose its leaves and also the first to regrow them.

There are still flowers around like this Tree Lucerne (Tagasaste)

But the fungi are the real show stoppers! 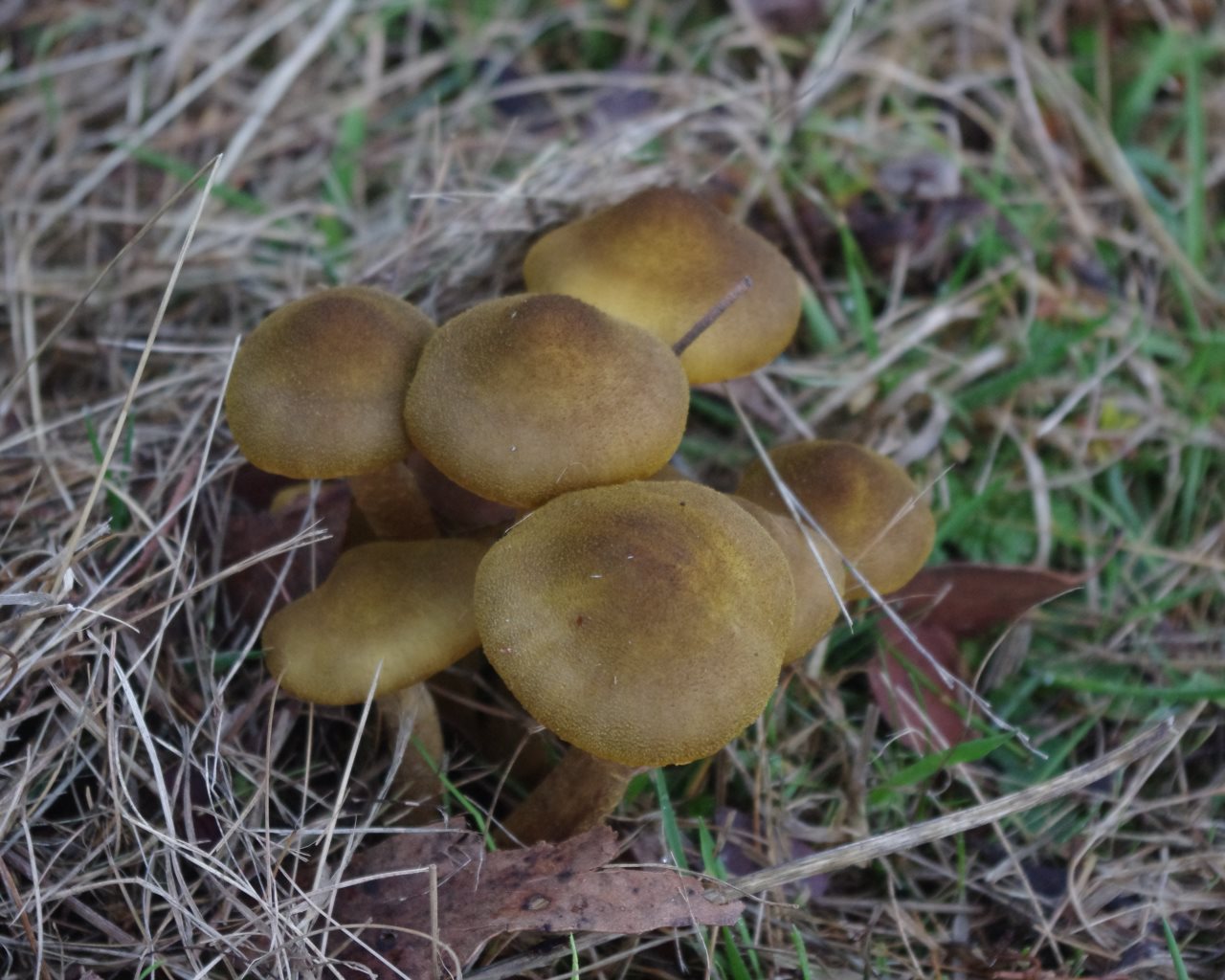 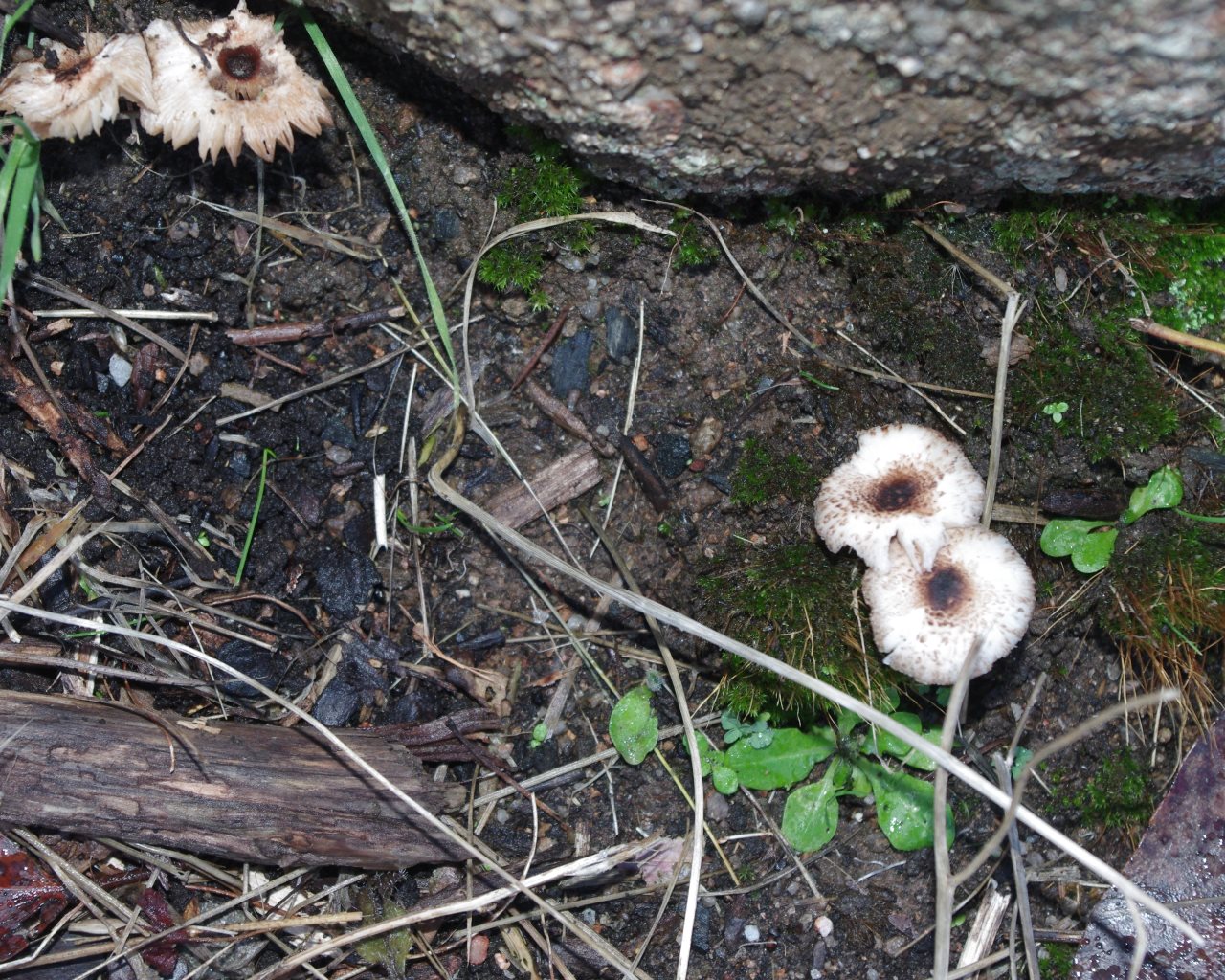 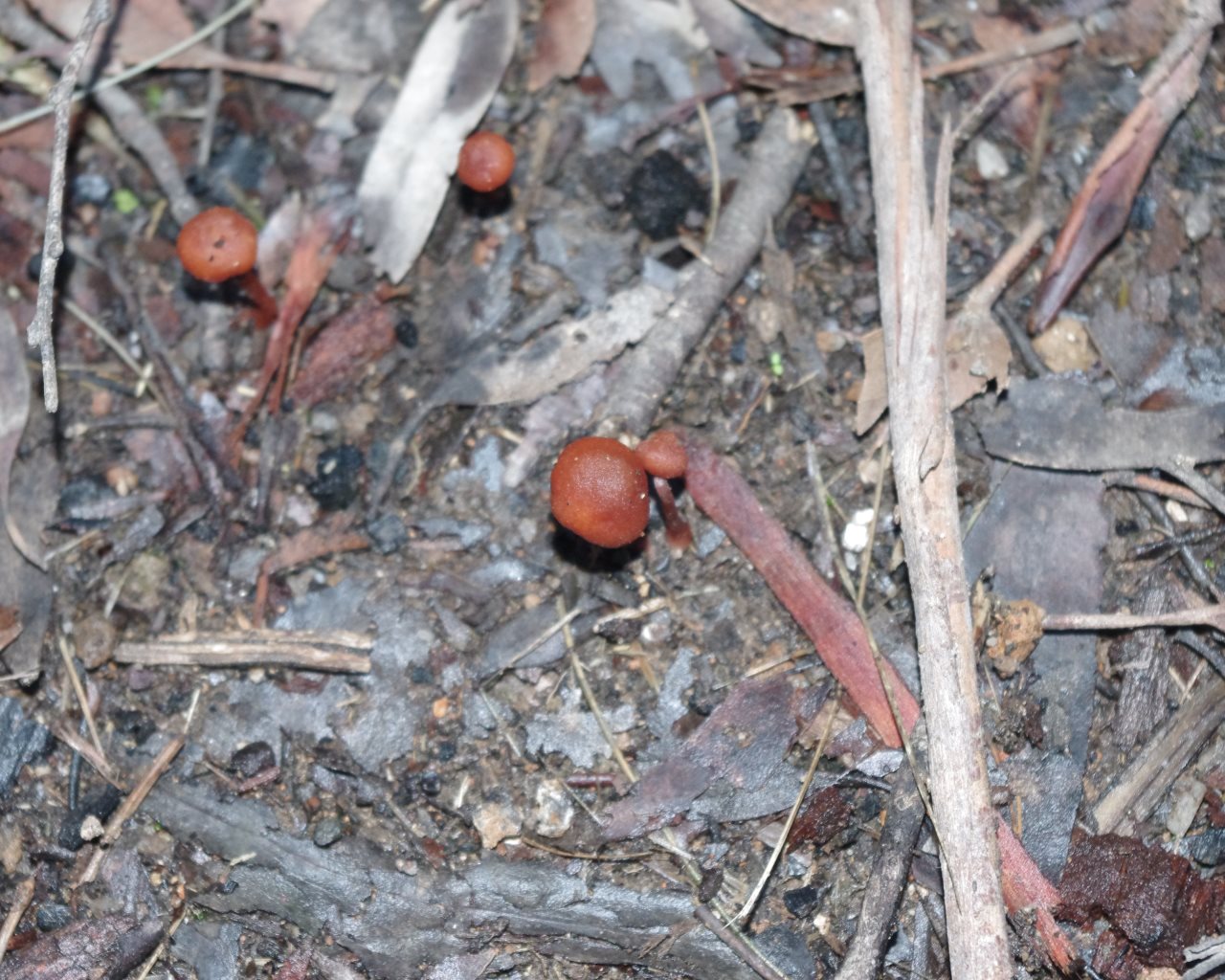 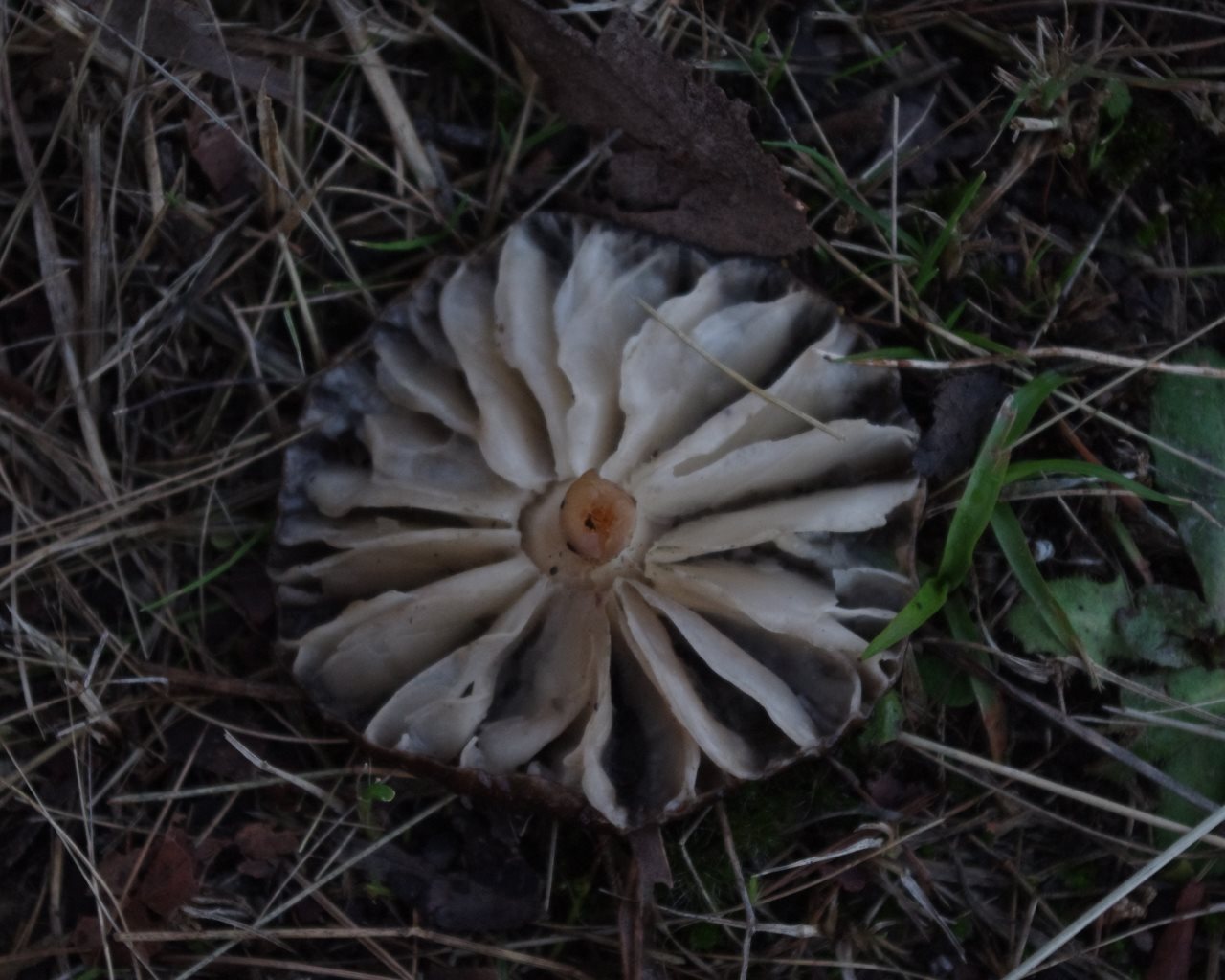 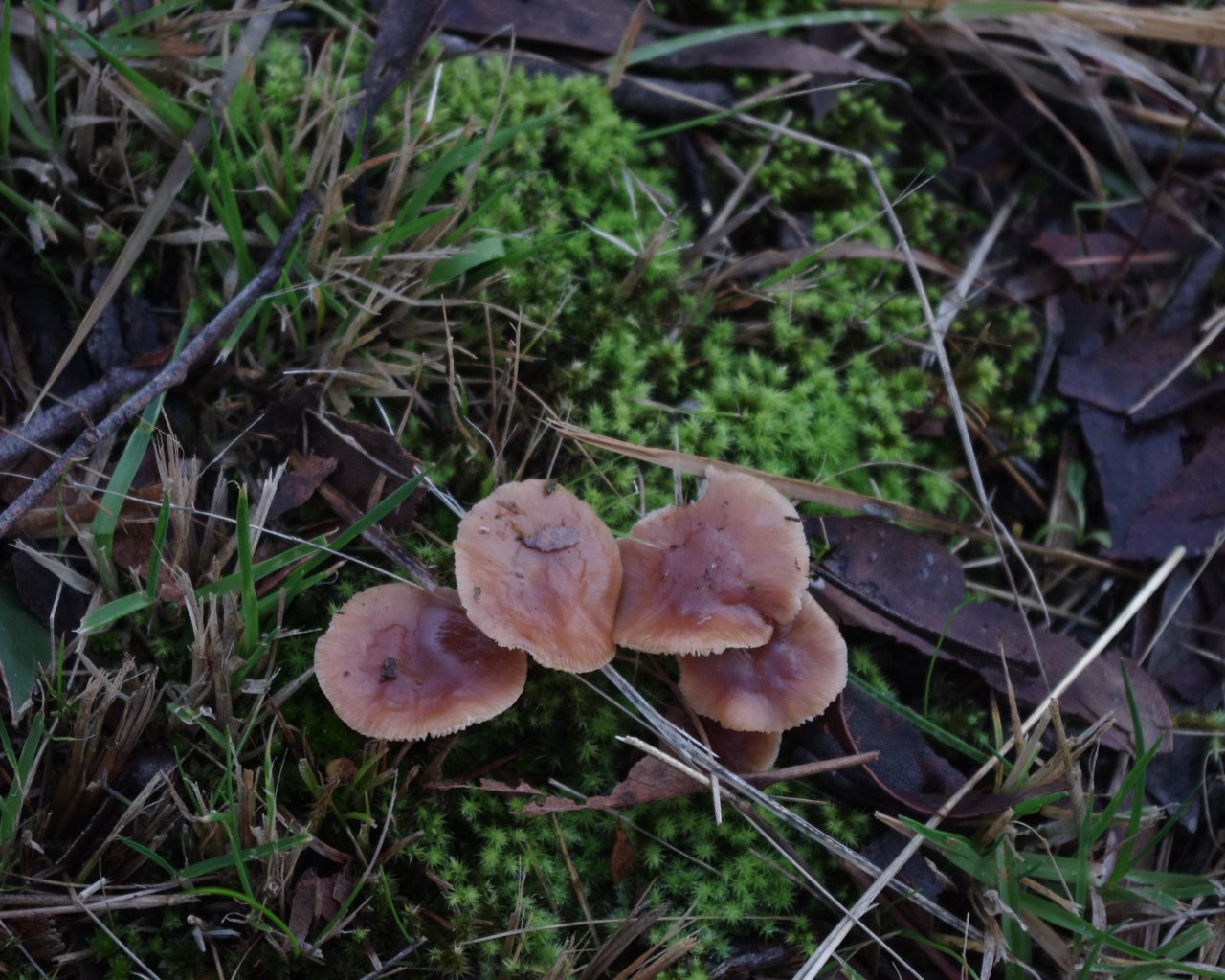