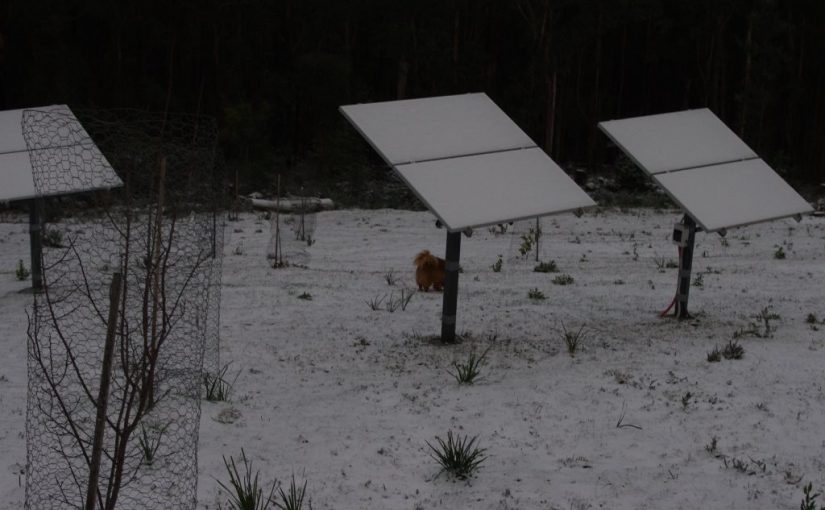 A few days ago I conducted a discussion with the Green Wizard’s Association of Melbourne on the topic of renewable energy. I know a thing or two about renewable energy because I’ve been mucking around with the technology for about 11 years now and the house is not connected to the electricity grid. Over that time I’ve decided that the technology is good stuff, but it is no replacement for electricity generated from the usual suspects: coal; gas; oil; nuclear; and hydro. My reason for that conclusion is because renewable technologies just don’t work the same.

Over the years I’ve noticed that people get lost in the technical details of renewable energy systems. I neatly avoided that pitfall at the group discussion, and instead simply told the story (with photos) of my journey over the past 11 years describing how I adapted the systems and learned to live with renewable energy technology.

I always like to begin talks with a tension breaker. And on that day, I chose to show an image of myself from 2007 where I was looking off into the distance, all idealistic and stuff. Back in those heady carefree days, I hadn’t installed a single solar panel, a wind turbine, or even used any batteries beyond the cordless drill, and so there I was in the photo full of beans about the prospects of renewable energy systems. Anyway, here is the photo:

I had plans back then. The long hair sure gave me some serious mojo! But really, I had no idea at all back then about renewable energy systems (edit: or hair, or mojo).

Before embarking on the renewable energy journey I bought a few books on the subject and read them from cover to cover. Even then after all that reading, I still had no idea, but more importantly, I was willing to give the technology a go and had plenty of high hopes for the future. You could see it in my face – and hair!

Eleven years on, I now have less hair, less mojo, but I have far more experience with renewable energy systems. That experience leads me to suggest that renewable energy is good, but it ain’t good enough. In all that time I’ve learned that the sun don’t shine at night and therefore solar photovoltaic panels (solar panels) produce no electricity at night. Sometimes the weather during the day means that solar panels produce no electricity:

People, upon hearing such bad news inevitably chime in with the suggestion that if the sun isn’t shining, then the wind will possibly be blowing which would be awesome for wind turbines. Well, it just ain’t so, as I discovered to my horror. Sometimes the sun doesn’t shine and the wind doesn’t blow:

I quite enjoy polite discussions because so many different points of view are raised and considered. That day someone asked me an outstanding and very searching question, the gist of which was: If you have taken eleven years to adapt your systems and learn to live with their limitations, what the heck are we meant to do?

It was such a good question that I may have actually mumbled an incoherent reply and then breathed a sigh of relief when the topic moved on. But then later, I began pondering that question and decided that I wasn’t going to directly answer it. Instead, here is an allegory on the very subject of starting a difficult task:

I like the coastal town of Apollo Bay along the southern point of the very scenic Great Ocean Road. For some reason I’ve been visiting the town since the late 1980’s, and it holds a special place in my heart. I don’t often go there any more because I don’t really much enjoy the population pressure from the huge influx of international tourists. Even during the depths of winter when the rain is driving and the oceans swell and roar, the town is now too busy for my personal preferences. I remember the town when it was otherwise, a mere two years ago.

Did I mention that the big swells from the winter oceans are eroding the beaches? Well you can see for yourself in the images in the article. I have seen for myself the giant trucks roaring up and down the beach moving sand from one spot on the beach to another spot. And most of that work appears to have been undone in a short period of time according to the article. Apparently, even a beach toilet block succumbed to the siren call of the mermaids!

The article also suggests that someone with deep pockets should do something about the situation to save the road and the low lying parts of town from the unrelenting ocean. But who is this person? What should they do? And when should they begin?

With any difficult task, failure is always an option. During my talk I included an entirely black photo, representing the light available when our solar power system unexpectedly shut down one cold dark winters evening this year.

Just to put the Apollo Bay article into perspective, the photo above shows 1 cubic metre (1.3 cubic yards) sitting in a 5×7 foot trailer. The article mentioned that 6,000 cubic metres of sand had been dumped onto the beach. Anyway, we brought the above trailer load of compost back to the farm this week.

Ollie the cuddle dog (who is actually an Australian cattle dog and has become Scritchy’s nemesis) continued to dig holes in the new corn enclosure so as to obtain access to the 10kg (22 pounds) of blood and bone added to the soil mix.

With Ollie’s continuing depredations to the soil mix, we decided to finish the corn enclosure. And it is now mostly complete and ready for planting!

Part of the trailer load of compost was placed into the corn enclosure. It is a 50/50 mix of mushroom compost (stable manure and bedding straw) and fine compost (very finely composted and sieved green waste).

And looking at the new enclosure from the hillside above the terraces may help put it into context:

We even began constructing a new set of stairs up to the next terrace which has not even begun to be excavated:

We managed to construct a new steel rock gabion cage this week. Regular readers will recall that the volume of rocks extracted from the recent excavations filled up our previous rock gabion cage.

The steel cages take us a long while to fill up with rocks, but we can construct a wire cage together in about two and half hours now.

We also somehow managed to find time on a gloriously sunny and warm late winters day to visit a local seedling nursery. The seedling nursery is a very cheap way to buy plants, and there are just so many temptations…

Observant readers have noticed of late that Mr Toothy has been muscled out of the photos by the young upstart Ollie. Here he is beaming at the camera!