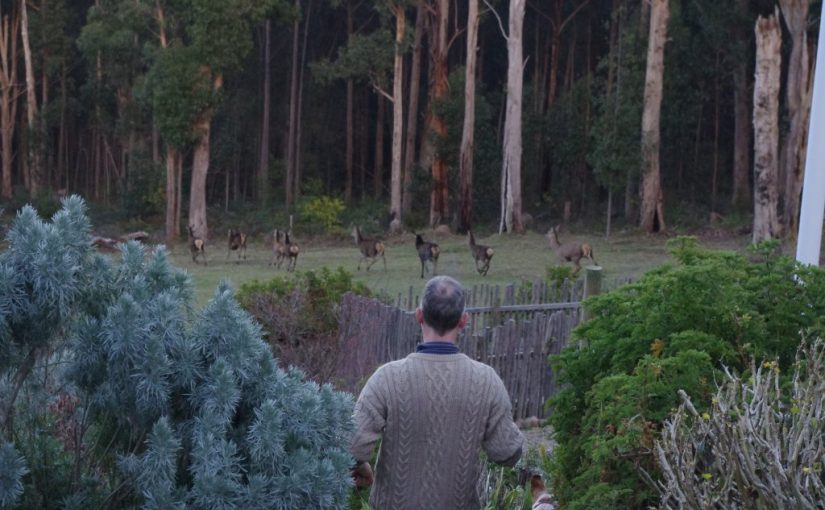 I ran into Toothy at the Lost Dogs Home, way back in July 2006. By the time July rolls around down under, it is winter, and that was a particularly cold day. Or maybe I was just upset because I’d only recently had to get the old boss dog put down. She was a tough old girl that boss dog, and she became increasingly grumpy as she got older. Some people do that trick too. Anyway, the old boss dog was nicknamed: “The Fat”.

The Fat earned that nickname too, because she once almost starved her little buddy, a charming Jack Russell, who was nicknamed Denver (because he was picked up on a country road – nuff said). So the Fat was grumpy, but not particularly hungry because she had been systematically eating Denver’s food. We discovered her kryptonite (greed) because we took Denver to the local veterinary to find out why he was so sickly. Clearly the vet thought that Denver’s malnourishment was caused by us staving him, and ever since then we feed all of our dogs separately. As a postscript, Denver rapidly regained his health once he got some regular food and lived to a ripe old age. The Fat was closely monitored thereafter…and also lived to a ripe old age.

The Fat was a large Dachshund – Corgi mix known as a Dorgi, and she was a very intelligent and affectionate dog, despite her predilections to kill off her little buddy through starvation. Dachshunds are quite nice dogs, and after her death we found ourselves at the Lost Dogs Home looking at this sad looking little long haired Dachshund huddled for warmth at the back of an enclosure in a coat that was clearly several sizes too large for him.

The editor and I conferred for a minute or two (outside of Toothy’s hearing) and then decided that he’d do fine. An hour or two later, Toothy exploded into the household. And I mean that in the energetic sense of that word, he really did explode into the household.

At that time we had cat which used to believe that The Fat was his mum, and the cat used to sleep cuddled up with the Fat every night. The cat had a broken heart when she died, and then having an explosion of Toothy into the household was the final nail in the coffin for the cat, because he then promptly died about a week later.

It was an emotionally tough time but, you know, Toothy was just a puppy, and puppies are hard work. Did I mention that the Lost Dogs Home had desexed Toothy, so when he exploded into the house, he was wearing an Elizabethan collar. That collar was lethal because he’d spot the cat and Old Fluffy the long since deceased Pomeranian, announcing his intentions of: Ramming speed, engines on full. And then ram into either of them, or preferably both at the same time if he could manage it. He even used to stalk us, but we were like Old Fluffy and we rapidly taught him the errors of his ways.

Eventually he settled down and stopped being such a nuisance, and he is now a respectable elder statesman of the Fluffy collective. Mind you, like The Fat, he is getting a bit grumpier as he gets older. But he may just be expressing his opinions, because no animal here puts up with his ramming speed trick.

You see long haired Dachshunds are fast runners, although Toothy is slowing down now that he is an elder statesman. The problem is, some of the birds and animals on the farm live quite a long time, and some of those – particularly the birds – have excellent memories. A family of magpies (of the Corvidae bird family) lives on the farm, and they are wonderful birds because they will alert me to the presence of all sorts of predators in the nearby area. Once they alerted me to the presence of a fox who was trying to steal one of the chickens. Plus the magpies have a beautiful song. If ever you’ve heard it, you’ll know what I mean.

In the past Toothy felt the need to chase the birds on the farm. The birds are all too fast for Toothy, but he gets good exercise and the birds get annoyed. Did I mention that the magpies in particular have good memories? Well, this week, they’ve taken their revenge upon the hapless Toothy because somehow they managed to take a dump on his head. It was an impressive achievement, and Toothy, well, he earned that one.

Spring is really starting to, I don’t know the right way to describe it, maybe Spring into gear? 🙂 Last evening the setting sun produced the most spectacularly dark blue sky that I can recall seeing. #no_filter #don’t_own_a_filter #no_photoshop:

Some mornings, fog fills the valley below the farm. There is something to be said about living above the fog line:

We’re a bit pressured for time at the moment because soon we will have to get into the summer projects such as mowing, harvesting, and firewood. So we are in the process of trying to finish off the various infrastructure projects that we currently have on the go.

Not all infrastructure projects have to be completed before we change over to summer activities. One example of that is the path to the secondary firewood shed and chicken enclosure. Recently we have discovered a new source of rocks on the property, and we’ve been exploiting it. We are adding large rocks to the downhill side of the path and this week the rock wall was extended by quite a few metres.

Observant readers will note that we have added a fresh layer of the locally sourced crushed rock with lime to the surface of the path. During winter, when the ground is cold and very damp, it is a real pleasure to use such a well formed path.

We also began placing a layer of the locally sourced crushed rock with lime onto the newly constructed terraces.

Four posts were also cemented into the ground. The posts are 100mm x 100mm (4 inch x 4 inch) Cypress Pine (Callitris species trees) and they’re apparently very resistant to rot due to their natural oils. It is a beautiful smelling timber when it is cut because it smells like soap. The posts will form the corners of a new small garden shed which we’ve begun constructing.

The round holes were dug by hand using a hand auger to a depth of about 3 feet. We then back filled the holes with cement so that the posts only sat about 2 feet deep in the ground. We ensured that the posts were exactly vertical and then filled the remainder of the hole to ground level with cement.

Really observant readers will note that at the very top of the above photo you can see a timber pallet protecting a new step on the concrete staircase leading up to the next level. Ollie the Australian cuddle dog (who bravely chases off herds of deer and is actually an Australian cattle dog) loves imprinting his paw prints into  curing cement and so any cement work has to be protected from him.

It is fortunate that Ollie is good at chasing cattle because the other morning a herd of deer were discovered down in the bottom of the orchard. Deer have no place here, and they have not endeared (endeered!!!) themselves to me because they strip the bark off my apple trees. Anyway chasing off herds of deer is Ollie’s job. It is what he gets paid for.

It is not only the deer who turn up here looking for a free feed. I scared off these two Sulphur Crested Cockatoos because they were rummaging through the raised vegetable beds. Those birds can live for up to eight decades and apparently also have excellent memories.

In breaking plant news: The plants are springing into activity with the mildly warmer spring weather.

93 thoughts on “Revenge of the birds”