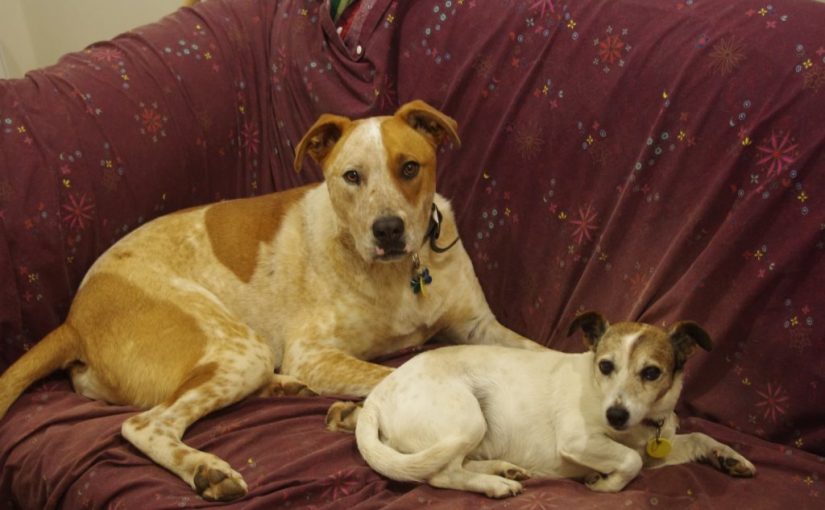 The editor and I visited a local dog shelter at the beginning of this year. As long term readers may recall, at that time Sir Poopy fox bane, suffered fatal renal failure. I really enjoyed Sir Poopy’s company, but renal failure is a tough thing to endure and he rapidly went blind, lost weight and began having serious seizures. Sir Poopy was very happy go lucky, if rather lazy dog, and the only time that I can ever recall him being unhappy was in his final two days.

Sir Poopy was the muscle dog here, and it was his job to deal with the wildlife (if they ever got out of hand). The wildlife that lives in the surrounding forest enjoys free access to the garden beds and orchard, but sometimes they can take that entitlement a bit too far and cause a whole lot of damage. And that is when you need a Sir Poopy fox bane, because he would happily clear them all off the property for a while thus giving the garden and orchard a break.

Of course, the downside of that arrangement was that Sir Poopy felt rather justified in whiling away his days on the beanbag. I’ve often suspected that it was his aversion to physical activity that was his downfall.

Whatever maybe the case, after his ultimate downfall, the editor and I visited a local dog shelter at the beginning of this year. The shelter shook us down for some mad cash because just after New Years day there were very few, if any dogs available. The post Christmas animal dumping rush had not yet occurred, and so we had a choice between Ollie (not his name at that point in time) and some other dog that was much bigger and much older.

The shelter people informed us that Ollie was apparently a real handful, and had already been returned to the shelter. We were certainly a bit concerned upon hearing that information, but regardless we took Ollie out on a test walk to see what sort of dog he was. He seemed fine to me, but maybe I have low expectations?

Anyway, on the test walk, I took Ollie (not his name at that time) into a nearby park and said to him: “Listen mate. If you can keep your sh*t together, we’ll adopt you.” Ollie replied: “Yeah. I can do that.” And that was that – the deal was done.

Except, the editor and I were then more or less interviewed by the shelter staff who couldn’t believe that anyone would want that particular dog. Clearly they must have believed that we’d never encountered a dog before, and that possibly we were completely bonkers in choosing Ollie. They even offered free dog behavioural counselling, which was definitely a slight upon Ollie’s (and our) good character.

Anyway, we brought Ollie back to the farm and he’s fitted in well with the other dogs. Ollie, is very much like Sir Poopy who he replaced, as he has a delightfully upbeat personality. He is really quite a lovely dog. However, unlike Sir Poopy, Ollie has far more energy. And the thing that has freaked me out, is that I’m not exactly sure when he’ll stop growing. Ollie is big – and he’s getting bigger!

Ollie is now eating three times the combined amount of food that the other dogs eat. It is possible that he has worms which might explain his love of food, but far out, that dog eats a lot of food. Fortunately we make most of our dog food from raw materials, so the additional expense is not great, but we now have to make far more dog food.

And all that dog food is going into growing a very large dog! He has grown from a diminutive 17kilograms (37 pounds) to a mighty 30 kilograms (66 pounds) in only 10 months.

The situation reminds me of an excellent bit of advice I received many years ago about chickens. A lady in the area who had been raising chickens for many years, told me that bantam chickens produce eggs that are three quarter sized , but they eat far less feed than larger chickens. I think about that bit of advice every day when I’m feeding Ollie, because it is not lost on me that he eats more than twice the amount of feed as Sir Poopy but performs sort-of the same function (having a delightful personality helps, but he is not yet a fox bane).

On a warm and sunny Thursday afternoon, the editor and I visited the local tip shop in order to obtain some materials with which to complete the new shed. And the local tip shop did not disappoint us as they had steel flashing in the same colour as the shed. I couldn’t believe my eyes when I spotted the steel flashing because it was the exact same colour as the shed.

Observant readers will note that the local tip shop also managed to supply us with a short section of dark grey roof capping which was installed at the very peak and front of the roof.

The door jamb was also added to the door of the shed. A door jamb is a fancy name for the bits of timber that stop a door from swinging inwards which may break the door off its hinges. In the photo above you can see that we also added a tiny little chunk of aluminium angle above the door. I reckon it gives the corrugated steel sheeting above the door a nice neat finish.

I connected up a 12V electricity supply to the shed. The electricity supply will be enough to power some LED flood lights as well as a water pump for the two water tanks that sit behind the new shed and will provide water to the plants on those two terraces.

Once the 12V electricity supply was connected up to the new shed, I was able to connect the low voltage water pump to the two water tanks that sit behind the new shed. We now have pressurised water!

Whilst we were at the local tip shop, we discovered an old steel garden table base. The steel used in those old garden tables is enormously strong and unlikely to rust away any time soon. We cut up some timber pallets and used the timber to create a top for the table. A bit of oil was applied, and we now have another outdoor table. Toothy approves!

We also finished filling another steel rock gabion cage with rocks – and then sewed the steel cage shut. Steel rock gabions are very, very strong and can hold back huge volumes of soil. You often see them used in road projects, but we use them here to hold back the soil on the potato terrace.

Spring is a lovely time to work, and whilst the sun is very hot because the UV is now rated as “Very High”, the air temperature is quite cool. In the past few weeks we’ve been busily getting things finished before we have to get onto summer activities. Fortunately, there is a little bit of time left before summer arrives, and so another project we have begun sorting out is the area in front of the house. For some reason, we originally created a huge area for unloading organic matter from the bright yellow trailer. The area did not need to be as large as it was, and so this week we have made it smaller.

The old strawberry bed has begun to be deconstructed. It looks very untidy, but has remarkably deep soil!

The warmer weather has meant that alcohol ferments at a much faster rate than during the cooler winter months.

The strawberry enclosure was weeded using a hand hoe. I’m really impressed with that particular tool.

And the strawberries are growing!

Like Ollie, the corn has recently doubled in size! Talk about megalocorn!

Fortunately, there are lots of greens in the paddock below the house for the wildlife to eat, so Ollie has not been called upon recently to do his job. The other night I spotted a kangaroo (with a joey in her pouch) and a wombat happily grazing away.

Most of the birds here are very brightly coloured like the male blue fairy wrens. Those birds in particular eat a huge number of insects in the garden beds.