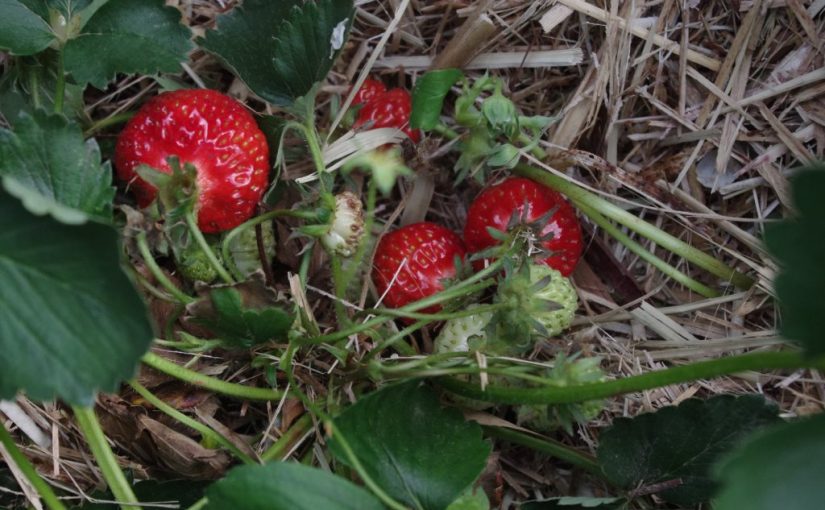 The first of the seasons strawberries ripened this week. Over my life, I’ve purchased many strawberries from markets and farm shops, but nothing, and I really mean nothing, prepares you for the explosion of taste that is a sun ripened strawberry plucked directly from the bush.

We’ve been growing strawberries for about five or six years now. I recall the heady days of the first year or two of the strawberry harvest. We had more strawberries than we even knew what to do with. Once during those days we baked a strawberry cake and it failed completely because we’d put too many strawberries in the mix. Not to worry, we fed the failed-to-set-cake to the chickens who greedily and quickly sucked it all back.

With the berry harvest we make strawberry wine (which is delightful) and also the strawberries produce a very tasty jam which is second only to my favourite jam produced from figs.

All good things eventually come to an end. By about the third year, every bird, animal and insect in the surrounding forest had also developed a taste for strawberries. Even the dogs developed a taste for our strawberries. And as all of that lot harvested more of the delectable berries, we harvested less, until finally one year we failed to get more than a cup full of berries. Even worse, by that time we were frankly afraid to venture into the strawberry patch because somehow leeches had managed to set up shop!

There are few fences on the farm, and the wildlife gets to enjoy mostly free access to the gardens and orchard. Most of the time this situation poses only minor difficulties.

However, the situation with the strawberries was so dire (because every single berry had been consistently consumed) that we decided to fence out every other creature (other than ourselves of course).

Fencing the old strawberry enclosure meant placing a heavy duty woven nylon bird net over the old enclosure. I thought that that would be good enough. It turns out that it was not even close to being good enough. Every animal that could, ripped holes in the heavy duty woven nylon bird netting (no easy feat). And then they broke in through the holes. Where they couldn’t break in, they simply squashed the netting onto the plants, ripped a hole in the netting and then ate the strawberries.

There finally became so many small (and large wallaby sized) holes in the bird netting, that the birds could actually get into the old strawberry enclosure and consume strawberries to their hearts content. Unfortunately getting out again was a problem for the birds. And the canine fluffy collective used to love nothing more than assisting the ‘ordinarily too fast for the fluffies’ birds that had become trapped. If I didn’t mange to release the birds, the canines would eventually manage to kill them through the netting. And the dogs would use their bone sharpened teeth to rip new holes in the netting in an attempt to eat the strawberry filled parrots. It was brutal, and so after a few weeks, I removed the tattered bird netting and destroyed it. The wildlife thanked me, because they rapidly destroyed the plants and any berries!

If we ever wanted to eat sun ripened strawberries that were grown here, then something had to be done.

Since then, we’ve abandoned the old strawberry enclosure to the wildlife, and planted nice neat rows of strawberry runners on the new terrace that was constructed earlier this year.

The steel fencing around the strawberry enclosure has not yet been finished and so the local parrots (Crimson Rosella’s) have been gorging themselves on all of the berries.

After watching the antics of the local parrots in the new strawberry enclosure, we decided that we had to convert the strawberry enclosure into a completely enclosed steel fruit cage. And after a days work, we had part of the supporting steel for the roof installed.

Observant readers will note in the photo above that the doors are a bit higher than the roof of the fruit cage. I had to modify both security doors (which we picked up at the local tip shop) so as to lower them in height. And after that was completed, we installed the remaining steel supports for the wire mesh roof that will be hopefully put in place over the next week. Until then, the parrots are having a serious party in there with my strawberries!

As these things often go, now that we have a near complete 11m / 36ft long fruit cage, we thought to ourselves: why not plant some other plants in there? And so we headed off the farm on a journey to find some grape vines to plant in the strawberry enclosure (or more appropriately named: fruit cage).

That adventure was not as easy to fulfil as you would at first believe. Eventually the garden club (Diggers) came through with eight different varieties of grape vines – and we planted them late this afternoon.

It was on the quest to purchase grape vines that we discovered that the largest plant nursery in the area has been sold. The business had been running for several decades, and it sits on a large land holding. I wonder if the land may be redeveloped as houses, if only because the business appeared to be clearing all of its stock. Who knows?

Anyway, if someone purchased the huge size of land (let alone paying for any goodwill or business infrastructure), they’d probably end up making such a huge outlay that it might be hard for them to make any return on their investment. Not being funny, but you have to sell a lot of grape vines in order to pay for a huge mortgage.

I read an article in the newspaper a few weeks ago which was bemoaning the decline of business start ups in this country. Bonkers property prices are part of that story because it is hard to start (or purchase) a business when you have to outlay a humongous quantity of mad cash, or sign up to a – really extraordinarily hard to get out of and expensive lease – in order to simply house your business. And that is before you’ve even begun having to sell stuff and things to other people. These act as barriers to entry for people who may want to start their own business.

Alert readers may well note that it is not only the physical fences that you can see and feel, that keep other creatures off the strawberries!

This week, in between delightful late spring warmth and sunshine, the rain was occasionally very heavy:

Long term readers will recall that in the past two years massive branches have fallen off one very large, and very old tree. Some people may view this as a nuisance, I on the other hand view this as a thoughtful gift of the forest towards our firewood coffers. Firewood is like mad cash in the bank, but far better on a cold winters night!

Last year I employed some blokes I know to assist with cutting up the fallen branches. They did a great job, but left us with a huge mess to clean up. Burn off restrictions are coming into force on Monday, so we had to clean up the entire area. This task involved burning off all of the small branches and dead leaves. But everything that could be recovered and used as firewood, was moved (by hand using a wheelbarrow) out into a sunny spot. That included cutting all of the larger chunks into much smaller and usable chunks.

Despite the firewood being out in the rain, the sun will provide more than enough energy to dry it all before being stored away for the winter in the firewood shed. As you can see in the photo above, some of the wood still has to be split before it is usable as firewood.

The sun and regular rainfall is providing a huge amount of energy to the plants. It is really green here now as can be seen in this next photo looking up towards the house, tomato enclosure and shady orchard.

And yesterday, I finally busted the charming Sir Scruffy in the act of digging a hole outside of the machinery shed.

For some strange reason that I can’t explain, Sir Scruffy has been digging a small hole outside of the machinery shed. Then he has been eating the rich soil in that spot. And until yesterday I’d been uncertain which dog/s had been digging the hole, but now I know (although the why of it escapes me). This has been going on for years. No wonder he is so heavy – he’s full of dirt.

In a plant news update: