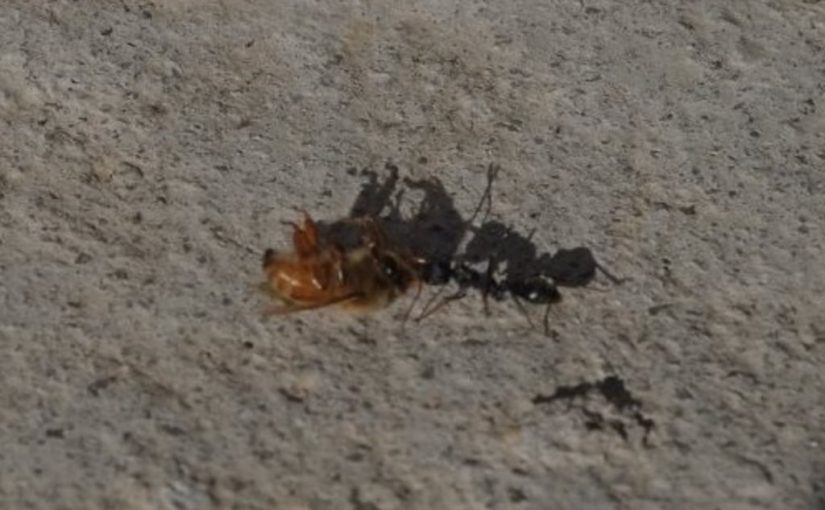 The other day, I was thinking about the ongoing war as I watched a bull-ant drag off the carcass of a European honey bee, if only because there is very little waste in nature.

Bull-ants are vicious little critters and despite their diminutive size, they pack an authoritative punch. I have no doubt that the ant and the bee fought an epic, (but ultimately futile for the bee) battle. And I’m almost certain that the ants ate every chunk of the bee, given the huge effort the much smaller ant performed just to haul the bee back into the colony.

In stark contrast, our species is really good at producing waste. In an amusing side story, a few months back I was at a cafe ordering a coffee, when the delightful barista (who I’ve known for many years) asked if I would prefer a ‘take away’ coffee, served in a plastic lined cardboard cup. To me, that was an unexpected question, so I gave her my best inscrutable face, which most likely came across as me looking a bit dazed and confused, and then remarked that: “Life was too short for take away coffee”. And to my utter amazement and delight, she heartily agreed with me (out of ear shot of other patrons ordering take away coffee of course!)

I like to support the ongoing war of waste efforts, and this week I delivered a sound blow for the powers that be. We replaced the dirt mouse vehicle (a Suzuki Swift) with a new dirt mouse vehicle (another Suzuki Swift). Inscrutable folks may wisely proclaim: Same, same, but different – and they’d be making an accurate assessment of the situation – although the newer dirt mouse is significantly lighter, has a smaller engine, and uses only two thirds of the fuel of the original dirt mouse (which didn’t use much fuel to begin with).

Over the past year, we’d spent a third of the value of a replacement vehicle on repairs to the dirt mouse, and we can’t sustain that sort of ongoing expenditure. We drew a line in the sand which proclaimed that we had spent enough on the old dirt mouse. The thing is, we have no idea whether the high rate of repairs would have continued into the foreseeable future. But my darker thoughts suggest to me that the machine was never designed and constructed to be repaired for the long term.

Waste is such a strange concept. We work to earn money, so that we can purchase items that someone else produced. The item has ongoing costs to operate and maintain it, which means that we have to work in order to pay for that to. And then we dispose of the item at the end of its lifespan (or when we get bored with it). Given that situation, it is best to keep costs low in the first place, and then maybe you wont have to work as hard.

The car dealer told me that old dirt mouse is going to a good home, but they may have just been saying that to me in order to allay my feelings of unease about the waste.

Waste is a real problem at the farm, because I have no garbage services. In fact, apart from the road which the local council taxes me to maintain, the property has no services connected to it. We are on our own, and simply have to do our best not to make a mess of things. Readers may have noticed that we are neat! However, this also means that the war on waste is on our minds a lot of the time. And a few weeks back, I had to concern myself with how that war was impacting the worms.

Scritchy the boss dog was scratching the skin on her back. She didn’t have fleas or lice, and I couldn’t see any tick activity. So, I thought to myself that maybe she has worms. I looked into my collection of dog medicines, and discovered a couple of anti-worm tablets (which were not even out of date).  We obtained those tablets when we purchased Ollie the Australian cuddle dog (who despite his futile efforts at impersonating a lap dog, is actually an Australian cattle dog).

The fluffy collective of canines are all different sizes, so in order to provide them with the correct dosage for the anti-worming medicine, I had to cut and crush the tablets up on a timber chopping board. Then I fed the tablets to the dogs.

Feeling satisfied in a job well done, I washed up the timber chopping board and knife, both of which had remnants from the tablet crushing activity. It was at that point, I realised that I’d just washed anti-worming agents down the sink and into the ‘worm farm’ sewage system. That was clever.

Fortunately the worm farm sewage system is quite large – and very full of life (I inspect it daily – and it is quite odour free). But no doubts about it, I killed a few worms in there through my act of ignorance. And for a few days, the dogs did the sloppiest dog poo’s that I had ever seen. And on reflection, Scritchy the boss dog, probably had an itchy back because she had been bitten by a bull-ant.

I’m going to declare that the weather this season is the most bonkers ever. In early spring, the farm got hit by daily frosts. The frosts were unrelenting, and I experienced the coldest weather here that I’d experienced in over a decade of residency at the farm (-2’C / 28’F). The seasons crop of apricots and plums were mostly destroyed, although the trees are doing well. And now, in between gloriously sunny and warm late spring days, we get epic storms that drop the temperature back to late winter conditions. This week was no exception.

But in between the storms, the sun shines strongly and it is now hot enough to burn your skin if you are out in the midday sun. We’ve again set up an outside kitchen as there is no point heating the inside of the house on a hot day. In the next photo, you can see a tray of dog biscuits baking outside away using the solar power.

I’m not complaining about the storms because I appreciate the regular rainfall. These sorts of highly variable seasons favour the strategy of growing a diversity of plants. And this year looks as though it may be a bumper year for the apples and berries. The parrots are also enjoying the many berries – and I’m not enjoying that.

Unfortunately for us, the local parrots are very clever birds. In fact an argument could be made that they constantly test both our mettle and our metal systems. On the same day that we completed installing the steel mesh roofing, a parrot managed to break into the enclosure.

It was polite of the parrots to alert us to this problem – which is now fixed (hopefully). (Postscript: There have been several break in’s since I typed that yesterday – and we have been rapidly Borg-like adapting to the parrots machinations).

A cubic metre (1.3 cubic yards) of mushroom compost and fine mulch was placed on the flat land on the next terrace above this fruit cage. We haven’t dug the terrace yet (a job for next winter), but that doesn’t mean that we couldn’t use the small amount flat land to grow pumpkins (some people call them by their less polite name: squashes) and various melons.