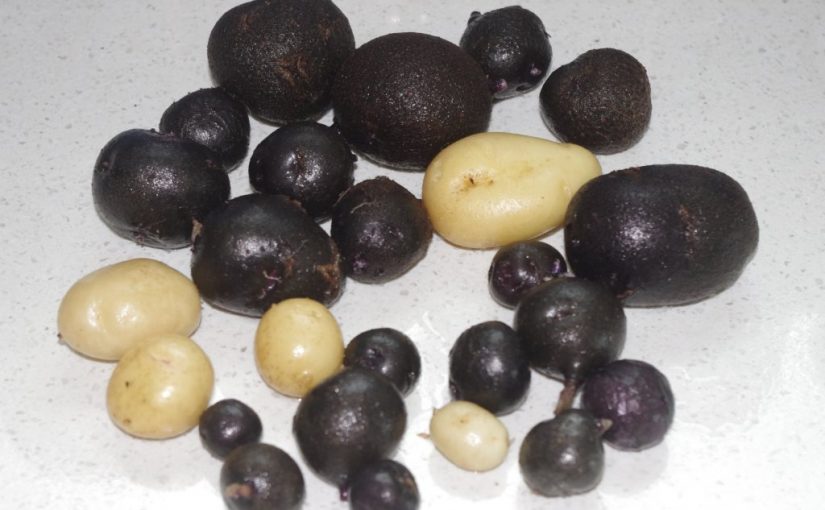 You don’t have to spend more than a few minutes with the dogs (colloquially known as the “Fluffy Collective”) here at the farm to know that Scritchy the fox terrier, is the boss dog. She is the boss, yet whilst being relentlessly cheerful, she is as mean as a canine could be. She rules the fluffy collective pack with an iron paw, tolerating no nonsense from the other dogs.

However, Scritchy is also an old girl and getting older. I believe that she is about seventeen or eighteen years old. And despite her age and diminutive size, she is a ball of muscle and energy and perhaps more importantly, she packs a mean punch – and is not afraid to use it.

Needless to say, as boss dog, the other dogs defer to her. But, last week in a completely unexpected incident, I noticed that Sir Scruffy – the charming scruffy terrier – had unceremoniously kicked her off of her food bowl. This was an unexpected turn of events, and I suspect that there has been a bloodless coup which means that Sir Scruffy the charming is now the boss dog.

I’ve never had a male boss dog before and he should be a fine boss dog if only because he can deal with the young upstart: Ollie the large and getting larger Australian cuddle dog (as every reader by now knows that he is actually an Australian cattle dog).

Sir Scruffy the charming, deploys an ancient martial arts inspired trick to deal with Ollie – and it is very effective. Sir Scruffy will emit an awful scream whilst simultaneously lunging at the occasionally obstreperous and somewhat surprised Ollie. And as any brave soul that has ever had to deal with a dragon knows for sure, the under bits of the dragon are the softest and most vulnerable.  And Sir Scruffy is not afraid to use that lore to his advantage.

Needless to say that Ollie now treats Sir Scruffy with a deference and respect that he never quite managed to display with Scritchy. And Scritchy now has the title ‘boss dog emeritus’. Don’t worry for Scritchy, she still enjoys plenty of perquisites as befitting her age and experience, it is just that things are not quite as good for her as they used to be. And Scritchy has taken this loss with good grace whilst retaining her usual unflappable cheerfulness.

Last week I read an article in the newspaper: ‘It’s not their money’: retirees vent anger at Labor dividend tax plan. That sounds awful, imagine an attack on old folks! Old folks do it tough. In fact I recall the days of the late 1980’s and early 1990’s when working class old folks with very little income, were forced to sell their inner urban homes and move because their pensions no longer covered the basic costs of living there. I was renting in those areas at the time and recall reading the tragic stories in the newspaper. I also distinctly recall the neighbour who could no longer afford to remain living in the house that she’d lived in for over forty years.

It was sad, but a lot of other people (who are now older themselves) swept in to make some mad cash buying up those inner urban homes. There were also stories about old pensioner eating cat food simply to stay in their houses.

Yup, like Scritchy boss dog emeritus, plenty of old folks do it tough. So I read the article with concern for their plight, and I managed to get four paragraphs into it before I read the surprising claim from a bloke of pensioner age:

I thought to myself, hang on a second, is that old bloke earning a six figure salary purely from investments? Now math is not my strong suit, but I reckon he may be on an investment income of at least $100,000 per year based on those numbers. And additionally I’m guessing that due to his age he is likely to be exempt from paying any tax. Bummer to be young these days – I note that gourmet cat food is quite expensive now!

What the old fellow in the article appears to be suggesting is that his annual income may possibly reduce from $100,000 to $70,000 with the proposed changes. Mind you, that income is likely to be tax free.

Maybe it is just me, but I find it a bit hard to feel sympathetic for the old blokes’ complaints, if only because I know plenty of people who work full time, and they don’t score that much mad cash and neither are they enjoying tax free status due to their age.

According to a Wikipedia article on Australian government debt, the Federal government has had 11 consecutive budget deficits, and the 2018 budget is forecast to be another deficit of $18.2 billion. A deficit is a fancy way of saying that you spend more than you earn – and every man, and their boss dog, knows that you have to make up the difference by borrowing the difference from somewhere (I believe that two thirds of the borrowings are owed to people living overseas).

If there was plenty of money sloshing around the Federal governments coffers, then I would salute the old blokes craftiness at scoring a mad advantage over everyone else. But if the Federal government has to borrow money just to pay the day to day bills, then I’d have to suggest that the old blokes advantage is a burden for his kids and future generations to bare, and I’m frankly uncomfortable with that.

I reckon Scritchy showed the way forward by backing away from her boss dog status with good grace, because it left her with plenty of perquisites to enjoy in her old age, without sacrificing the remaining fluffy collective and fuelling animosity.

Last week I described the weather as bonkers. The weather this week was something else altogether (bonkers squared?) A chunk of cold air associated with the stormy oceans swirling around and around Antarctica, broke loose and drifted north just to land here. The fancy name for that weather event is a ‘cut off low’. How that plays out, is that at times the rain could only be described as feral because it was so torrential.

At other times, storms rolled in from the south west producing spectacular lightning and thunder.

Very occasionally, the sun would shine, and this was a good thing for the house batteries because solar photovoltaic (PV) panels don’t produce a great deal of energy when there are thick clouds and heavy storms. During one sudden break in the clouds, the system recorded more charge from the solar power system than I had ever previously noted:

Needless to say that I was unable to get much work done around the farm this week. At one point on Friday I noticed that there was a break in the rain, so I headed off to perform an upgrade on the connectors and fuses for the six solar PV panels which sit in the paddock below the house.

I thought to myself that the re-wiring and box replacement job wouldn’t take too long. Then I accidentally dropped a crucial nut into a cable conduit that runs under ground. I couldn’t believe it. And it was impossible to retrieve the nut without making a huge mess of things. So I looked through my collection of parts and discovered to my horror, that I had every other metric sized nut other than that particular size (M5 for those who are technically minded).

I employed a bit of farm engineering to solve the problem, by simply replacing the bolt that the nut should have been screwed onto, with a larger bolt and nut. Problem solved, but it took a while to solve. And the rest of the re-wiring job still had to be completed as I couldn’t just leave the live, but low voltage wires exposed and hanging there.

Meanwhile another wave of the storm ever so slowly approached from the south, and before I had completed the job, I got drenched with rain. And it kept raining for hours. Fortunately, the job is now complete.

The wiring is pretty neat and the benefit of this arrangement is that a problem with any two solar PV panels won’t stop the others from producing power. This section of wiring was the very last to be upgraded so that the panels are fused this way (as well as being again fused in the battery room). Given the huge amount of energy the solar power system can produce (and it produces far more than a MIG or TIG welder could ever dream about – all day and everyday) it pays to be cautious and have lots of fail safes built in.

And that was it for work this week!

72 thoughts on “The old dog and the boss”