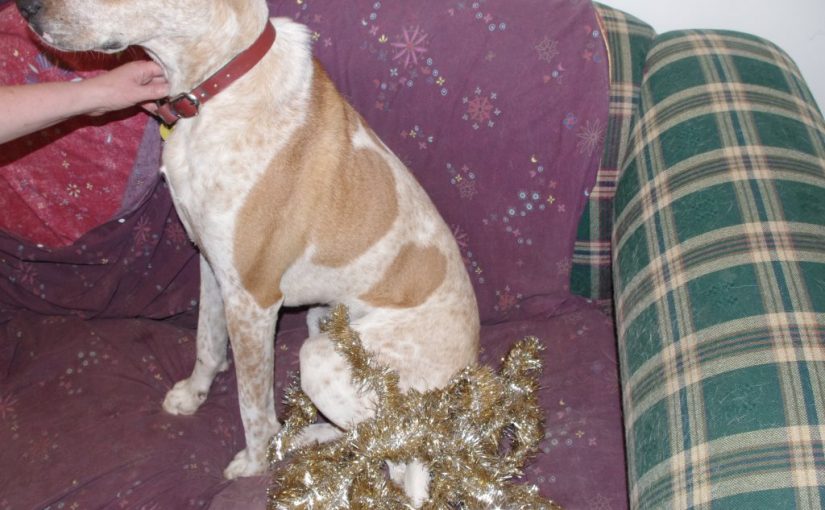 ‘Twas the months after Christmas, and all through the night

They were thrown from vehicles without any cares

Safe in the knowledge that tip fees would never be theirs.

It is all right, in fact everything is all right, the struggle continues but we’re making solid ground. Victory is near in the War on Waste. Push unhappy thoughts from your mind, and focus on the goodness within. Fear not.

I don’t worry about the War of Waste, if only because last summer some cheeky scamps showed the true way forward: They dumped their dried up and deceased Christmas trees in the forest.

It is genius really, because one day in mid January, dead Christmas trees began sprouting in the forest. The editor and I began spotting dead Christmas trees by the side of roads all over the mountain range. We’d even spotted one by the side of the road in an outer Industrial estate of Melbourne. Like Star Trek’s famous Tribbles, they were multiplying and could be seen everywhere!

The closest dead Christmas tree to us was located in a picnic ground deep in the forest. It is a lovely and scenic picnic ground with a creek meandering through it. As an interesting side story, the creek begins near the bottom of my property where very tall trees grow over an under-story of ferns and shrubs. It is a beautiful and wild place.

But then things got truly weird. That particular Christmas tree began moving around all of its own accord. It was if the Elves or the Fairy folk of the forest had decided to play tricks on us rubbish dumping humans by moving the Christmas tree randomly around the environment. And no it wasn’t the wind.

It never travelled far, but it travelled far enough every couple of days for the editor and I to take notice. It was a bit of a mystery really, and every time we ventured near to that picnic ground we began keeping a sharp eye out for the mobile dead Christmas tree. It was quite entertaining!

Hither and thither the tree moved, and where it stopped nobody knows. At one point the tree crossed the bridge over the creek, and I hoped that the Elves or Fairy Folk recalled to pay the bridge troll? But sadly they may have forgotten this most important aspect of their journey because the dead Christmas tree was dumped next to the gate of a rather orderly looking property.

Sadly within a few days of crossing the bridge over the creek, the Christmas tree was no longer to be seen. It had moved about the area for months, but I suspect that once the cold weather of winter settled in and burn-off restrictions were lifted, the tree became toast. There are still so many unanswered questions…

Speaking of getting into the Christmas spirit, one of my favourite things to do during this festive time is to check out the outrageous displays of Christmas lights in the area. It is summer down here and so I always try to find the unusual Australian themed Christmas light displays because I seriously doubt that anyone in the Northern Hemisphere has ever seen a Kangaroo and Emu Christmas themed light display accompanying a very cold looking penguin?

OK, and I’ll bet you cold Northern hemisphere folks have never seen a Christmas Koala light in a tricked up Eucalyptus tree? Didn’t think so!

And whilst Santa appears to have thiefed off with my old 1982 Yamaha XV-750 motorbike (a nice choice but shame about the starter motor), two Deer are busy browsing a tree.

Hope you enjoyed those as much as we did!

The War of Waste is clearly being won! But on a darker note, the forces of Evil (Ollie and Toothy) have struck a blow for the resistance and the Wart Wars has continued. This time the little rotters are using a wart on Sir Scruffy the charming, as a fast food outlet by licking his wart. The Evil Empire (the editor and I) have struck back and are treating Sir Scruffy’s wart with castor oil. And nobody is happy about it. The wart however is now half the size that it once was.

The solar power system is both extraordinarily simple and extraordinarily complicated, and during such cold and sunny weather over summer, the PV solar panels can occasionally produce far more electricity than their maximum rated output. And on such days, the circuit breaker for one circuit of 12 PV solar panels occasionally switches off. The original circuit breaker accommodated the maximum ratings as shown on the back of the panels. These ratings are to be taken with a grain of salt because of the over production effect during cold and sunny weather near to the summer solstice. This week I replaced the four circuit breakers with much higher rated components. That should fix the minor but annoying issue.

Observant readers with good eyesight and an enjoyment of all things techno geekery, will see that the controller on the right hand side is displaying a reading of 170A (amps). For 30 panels, that is 5.67A per panel and they’re meant to produce only a maximum of 5.2A per panel. Incidentally 170A at 36V = 6.12kW which sure is a lot of electricity.

The strawberry and grape enclosure has been completed. Cement pavers were cemented at the doors on either end of the enclosure. The cement stops birds and other burrowing animals from gaining access to the strawberries from underneath the door.

The remaining three stainless steel grape wires were installed into the enclosure. The ten grape vines planted inside the enclosure will climb up and along these wires one day. The wires run from end to end and there are two on either side of the enclosure.

The grape vines are growing very fast. They maybe related to Triffids… I use twine to encourage the vines to grow up and onto the stainless steel wire.

Oh! And we purchased a nifty second hand electric preserving unit. It is quite an old unit and can hold a dozen 900ml (0.95 quart) bottles which can be seen sitting next to the unit in the next photo. The unit is manufactured from stainless steel and it should have a very long lifespan. We were looking for an electric unit for a while so that we can make use of the plentiful electricity that we have at this time of the year.

And hopefully we’ll bottle some of the organic apricots that we purchased a few days ago. We usually have plenty of apricots from the trees here, but frosts early in the season knocked the blossoms off the trees.

78 thoughts on “A Christmas Tail”