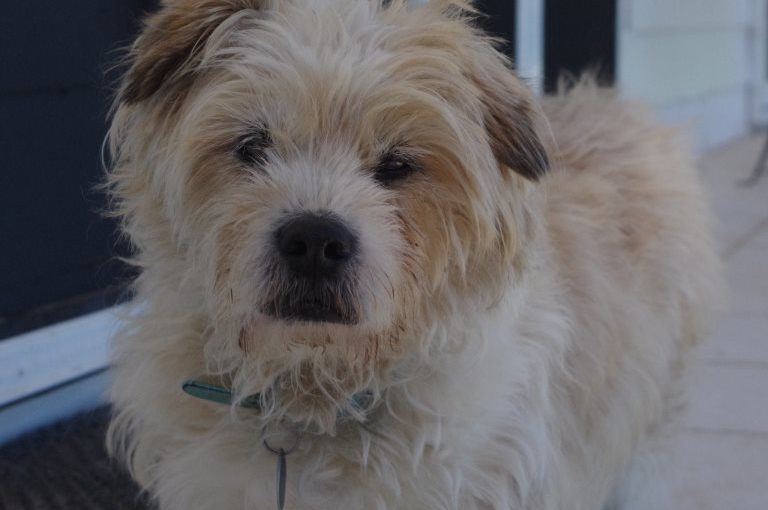 Dogs make for poor company in a bedroom. They snore, and they’re very comfortable ripping out a hearty fart. And sometimes when they’re enjoying a dream, they’ll be sound asleep and not moving anywhere, but their feet are running at speed along the timber skirting boards at the bottom of the walls.

It is a bit of a mystery as to how Sir Scruffy managed to end up sleeping in the bedroom. Here he is:

He looks like Paddington Bear does he not? He’s getting on in years too. However, he is a dog that knows his own mind. And one day many years ago, he decided that he wanted to sleep in the bedroom. He’s a master strategist, and so he chose to sleep on the floor next the editors side of the bed, rather than risk being on my side.

At first we used to pick him up and decamp him back to his comfy bed near to the wood heater. What dog doesn’t love a wood heater during cold winter nights? Sir Scruffy is one such dog. The cheeky little scamp used to wait until we were fast asleep and then he’d swan back into the bedroom and settle into his – fast becoming usual spot – on the floor next to the editors side of the bed.

Winters are cold up here in the mountains, and Sir Scruffy is an old dog, and winter nights spent on the timber floor in the bedroom would be a challenge, even for a puppy. In the cold winter mornings, Sir Scruffy the crunchy, would look at the editor and I with a face that clearly said: “You two are the worst humans ever!” So we got him a woollen blanket to sleep upon. All was suddenly good with the world again.

In those heady days Sir Scruffy was old, nowadays he’s positively ancient. About a year ago I noticed that he preferred sleeping with his head propped on items that were soft, so I got him a small low pillow and stuffed it under his woollen blanket. After that modification he said to me: “I take back all that stuff I said earlier, you two are alright!”

He is a quirky dog, and the other week he decided that he no longer wanted to eat his breakfast in the morning with the other dogs. For some reason he decided that he much prefers breakfast in the evening. So his breakfast gets made in the morning and sits on the bench all day long fermenting. I chuck a bit of home made yoghurt into his breakfast and that is the source of the fermentation. Yoghurt cooks at 43’C / 109’F so I doubt very much that it will go off over the course of a day. Anyway, he loves it, but in the evening.

He’s isn’t shy about letting you know what he wants. Other dogs will sit quietly at a door waiting to be let in. Sir Scruffy on the other hand has learned to knock on the door – any door – to attract our attention. And it is hard to ignore the banging racket that makes, so he gets promptly let in.

Despite Sir Scruffy being an arthritic and generally crunchy old fella, Ollie the Australian cuddle dog (regular readers will recall that Ollie is actually a very sensible Australian cattle dog) has a deep respect for the opinions of Sir Scruffy. I’ve observed the two dogs interacting and Sir Scruffy trucks no nonsense from the young upstart Ollie. It is awful to behold and in his own uniquely crunchy way he is not shy at all about chomping down hard on the obstreperous young Ollie, if he can catch the agile young scamp.

Earlier in the week Sir Scruffy was very ill. I thought that his time had surely come and he was about to keel over. But no, he made a full recovery. However, Saturday afternoon, I too became ill, in fact very ill. After consuming some serious anti-nausea medication, I slept the rest of the day away and also the rest of the night too. The fluffy collective took turns in keeping an eye out for me in my hours of need.

Dry hot summer air combined with the smoke from bushfires produce the most amazing coloured sunsets. And this week was no exception:

Some mornings this week have been intensely cold. The other day I even spotted a band of cold moist air (otherwise known as frost) settling in the valley below the farm.

We took advantage of the cold mornings earlier in the week to harvest firewood. One morning we got up at sunrise and over five hours we cut, split and stacked more firewood.

The now cut and split firewood sat out in the sun for a few days before we then began bringing it up the hill and stacking it in the firewood shed.

People get a bit funny about firewood as an energy source, but after a decade of learning how to live with it, I reckon we can say that we know a thing or two about firewood. In the past two years we’ve incorporated an electric (solar powered) chainsaw and a much larger electric log splitter, and so we’ve barely used any fuel in the production of this energy source. And the proof is in the pudding because ultra dry and seasoned firewood burns really cleanly with little smoke and even less creosote (the fancy name for poorly combusted and rather toxic sugars produced by burning damp and unseasoned firewood):

I’m not much of a fan of summer because of the serious heat, but the plants need the heat in order to grow, and if they didn’t grow we wouldn’t get any produce. It is a real predicament, but you learn to live with it. This summer has taught us the benefits of growing a wide diversity of plants, and I reckon we have nailed the succession of forest berries. The succession for harvesting forest berries at this location goes like this: Strawberries, Currants; Raspberries; Gooseberries; and Blackberries. Everyday we are able to head out into the garden and pick a batch of berries for breakfast – and we have done this now for months. We’re now at another time of change where the raspberries are slowing, and the blackberries are beginning to take their place.

Now that the raspberry season is drawing to a close, we produced a batch of very yummy raspberry jam to enjoy on home baked fresh bread over the winter:

We grow a lot of black and red currants too, but those berries are best converted into wine. And black currant wine is the tastiest fruit wine that we make.

The apricot harvest this year was terrible due to the many late season frosts which destroyed the flowers on the trees. Peach trees flower slightly later than apricots and so they missed the run of extraordinarily cold weather. That means that there are several trays of Anzac peaches slowly ripening in the house. The peaches don’t preserve well (bottling / canning) and there are more than we can eat (and the birds got about as many again!) so we may make peach wine or peach jam. If anyone has any other suggestions please let me know?

Did I mention that I don’t really enjoy the heat? Oh yeah, I did mention that. On the other hand, the corn seem to be enjoying the heat. In fact they’re doing so well, that we may construct an even larger corn enclosure for next summer and this smaller enclosure can become an onion bed.

The tomatoes, eggplants, capsicum (peppers) and chilli’s are loving the heat too.

Herbs are delightful summer plants and many of them are in flower at this hottest time of the year.

58 thoughts on “A very special fluffy”