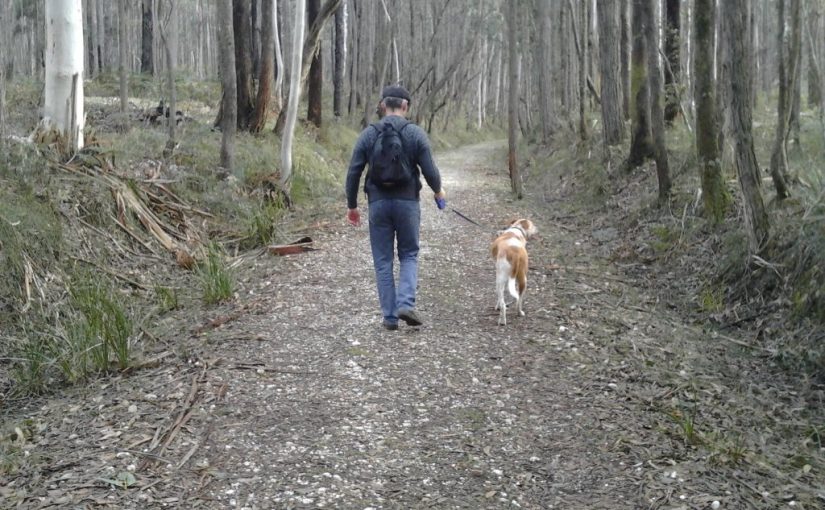 A pungent stench emanated from the rear of the vehicle. The fifteen year old Suzuki Vitara dirt rat is a small vehicle. However, when it comes to potent stinks, the rear of the vehicle is very close indeed. Ollie the Australian cuddle dog (by now everyone knows he’s an intelligent Australian cattle dog), was looking agitated. And we’d been driving for less than ten minutes.

“Chris. I gotta go, mate. NOW!” As the car filled up with canine flatulence, I pulled over and parked on the side of a quiet country road. Ollie was let out of the back of the car and proceeded to dump the contents of his bowels.

With the urgent canine business attended to, the cars atmosphere aired out, we were able to proceed along with our journey. This was Ollie’s first big trip in the car, and I’m guessing his other interactions with vehicles took him from one foster home to another. And my understanding based on observing how he reacts, he probably spent most of his time in foster homes in cages.

He doesn’t like cages, that’s for sure. However, the other dogs have taught him to ‘chill out’ if he is put in the fenced dog enclosure. Toothy and Scritchy, who are much smaller dogs, look at Ollie and say: “What is wrong with you dude? It’s out of the weather, it’s warm, there’s water. Just relax man. Are we cool? Yeah, we’re cool, so get it together bro!” And so with their help, Ollie has learned to relax in the dog enclosure, but in the car he wasn’t relaxed at all.

I was beginning to have serious misgivings about bringing Ollie on the walk, but then misgivings can be ignored, and I expect Ollie to learn, if only because he can. And before we knew it, we had arrived at the beginning of a three hour walk to the town of Lyonville and return:

I now hand you over to Ollie the Australian cuddle dog:

Are you dumping me here or what? You know, Toothy started it first, and it had nothing to do with me! Oh, you’re putting the lead on me. I like the lead, that means we’re going for a walk. Are you planning to dump me somewhere on the walk?

What’s the withering look for dude? OK, you’re not going to dump me on the walk, I get it. Let’s stop talking and get on with the walk.

What are all those old buildings and funny looking tiny red houses on wheels? Oh, so they’re the old disused railway station at the central Victorian town of Trentham. What? The railway line used to connect the goldfields at Daylesford with the town of Woodend. Isn’t that still part of the Bendigo line railway line to Melbourne today? Anyway, thanks for the boring history lesson. Let’s get on with walking.

I must say that this walk thing is nice. The weather is great and the track is nice on my paws. And so many great smells.

Look over there, what are those large dogs? They’re the biggest dogs I’ve ever seen. What are they? Oh, horses. Never seen them before, they don’t look that bright to me. That is because it is I who is on the outside of the sodden paddock, not them. And what’s over there? Oh, Sheep, boring! Well they don’t look too bright either. You can see it in their eyes. Can I round them up boss? What do you mean, no! Meh.

The walk progresses out of town and into the forest.

Boss! I smell wallabies, wombats and kangaroos. And over there is a juicy marsupial dog chocolate. Yum! Anyway, why are the trees so small, I’ve seen bigger trees at home.

Wow! So, you’re saying that the forest was logged from 1850 before eventually being closed in 2002. And the railway line took timber north to the goldfields and south to Melbourne. And during some eras there were dozens of saw mills and hundreds of workers in the forest. I’ll bet they could have used the services of an intelligent cattle dog like me? I’d take pay in wallaby tails. Yum!

Those two are the stupidest looking hairy dogs that I’ve ever seen. No wonder they mess around with sheep, instead of dealing to cattle like a proper dog. And what is with the top knots? They look like hipsters, and everyone knows that cattle dogs don’t need top knots. Watch out boss, one of them is lunging at you. Take that ya hairy top knotted freak.

Their humans muttered apologies, and soon we reached the township of Lyonville and turned around…

Glad you’re not dumping me. I feel much better now that we’re heading back. I know exactly where we are going. Hope we remember to stop at the interesting bridge that we weren’t allowed to walk on. Anyway, I need a drink from the water in the creek.

The car is eventually reached after three hours of continuous walking…

Boss I like this walking thing. You’re not going to bore me with another history lesson are you? OK, I’ll listen for a bit on the condition you give me some bacon and toast from the Bacon, Lettuce and Cheese toasted sandwich that you’ve been talking up.

So you’re saying that during the Great Depression era, public transport was free on weekends, and many people used to head out into the countryside in order to enjoy long walks in nature? Boss, does this mean that if that happened now, I’d meet other stupid looking dogs like those two Bearded Collies with the bad attitudes? Cool, they needed dealing to, for I am a sophisticated and intelligent Australian cattle dog, unlike those losers.

We now forcibly remove Ollie from the keyboard…

After last weeks rain, the sun shone and the days were warm. For this time of year, the weather was genuinely superb. Both the editor and I decided to ‘make hay whilst the sun shines’ and during the week we worked on excavating the new garden terrace on three separate occasions.

All of the digging is done by hand using hand tools. And the soil is moved from the lower terrace and placed on the upper terrace. Observant readers will note that the face of the excavated soil looks a lot like an unfinished cob wall. Cob is a fancy name for constructions using clay and straw and it has been used by humans for millennia. We’ve used this technique before on terraces and in this mountain range it is very stable.

Observant readers will note that there is little visual difference between the compacted soil on the upper terrace with the excavated soil surface on the lower terrace.

The excavations have unearthed a huge number of rocks. Every single rock has a use here, and all of the smaller rocks were placed in a rapidly filling up steel rock gabion cage which retains the soil on the potato terrace. Over the next week or so we intend to construct a new empty steel rock gabion cage.

The native birds follow our excavation activities with a sharp eye. And despite the fluffy canine collective being present, the birds are fast to grab any grubs that we unearth. The local family of magpies are the most adventurous.

The wet weather last week, combined with the warm weather this week have produced a plethora of mushrooms.

Tree ferns which struggled with the recent hot and dry summer, are now beginning to produce new fronds now that regular rain has returned. Don’t let their delicate good looks fool you, the tree ferns are hardy as old boots.