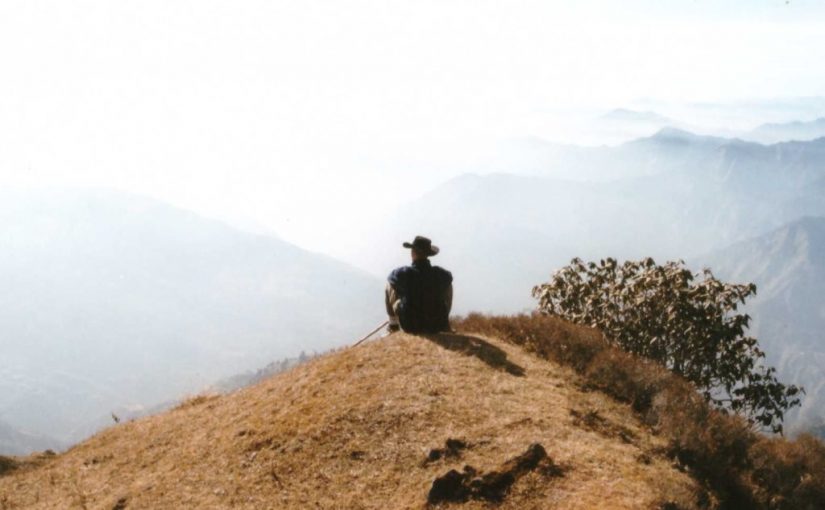 Earlier today I travelled for three hours (one way) in order to speak to a lady about a machine. It is an interesting machine, the price was agreed upon, and the machine was loaded onto the bright yellow trailer. Then we headed home. Today was a beautiful spring day for a car trip as the air was cool, the sun gentle, and the countryside was bright green and full of promise.

On the return journey we stopped off at a lookout spot which has commanding views over the Valley of a Thousand Hills (Murchison Gap). The Thousand Hill claim seemed like a bit of an exaggeration to me, but there sure were a lot of hills to be seen from the lookout. And in the far distance you could just make out the alpine areas.

We don’t really travel much these days, so today’s journey was something of a long haul road trip for us, but with a pragmatic purpose. Concerned readers may be relieved to know that we stopped off along the way at several towns with the purpose of investigating the purported ‘award winning’ claims made by local bakeries. Some of those claims even turned out to be true, and our taste buds can confirm the claims!

As I mentioned, we don’t travel much these days, but it hasn’t always been that way. Late last century we spent almost three weeks walking around the Annapurna region of Nepal. In some ways the region is a bit like where I live today (i.e. quiet and remote), although the elevation there is somewhat higher.

In the photo above, the air is far from clear, and I’m unsure whether the mist was from smoke or moisture, or perhaps a combination of both. Speaking of which, it’s early spring here at the farm, but already smoke from distant bushfires far and away to the north of here have begun producing some interesting sunsets:

Pollution is a funny thing, and sometimes despite the horrendous bushfires up in the north east of the country, it can also produce unintended consequences like the beautiful sunsets here. There has been a lot of talk this week about pollution. The talk is mainly about one form of pollution (among the many forms which appear to have been forgotten about), and that happens to be carbon dioxide pollution. Unlike the other less fashionable forms of pollution, carbon dioxide appears to have captured the publics collective imagination. And I even heard on the youth news radio program that I regularly listen to, the moral problems relating to the activity of long distance travel and its epic carbon footprint was raised. To my ears the discussion sounded like sage heads were nodding in agreement that the situation was not good, whilst at the same time plans were surreptitiously being made for their next big overseas trip.

I’d like to say that we no longer travel much these days because we’re concerned about the carbon footprint of the activity, but it wouldn’t be true. Back in the bad old days when I worked at jobs high up in the corporate world, I’d save mad cash. The editor would likewise be adding to those mad cash savings. And then we’d reward ourselves by splurging the mad cash savings on an overseas holiday. We’d enjoy the experience of travel despite the uncertainty of not knowing where the next toilet will be. But then at the end of the holiday, financially we were back to square one. At some point, it just no longer made sense to use our hard earned mad cash savings that way, and so we decided instead to work less, and pursue other activities with our time. It wasn’t a hard decision to make, but reflecting long and deeply upon our ideals (i.e. travel) is always a painful process.

I’m a long time self confessed fan of the Grand Designs UK television show, and it is about the only show that I watch nowadays. It’s been going for twenty years and the story follows a similar theme week after week. And whilst the details of the story often vary, the pain is generally the same. Someone sets an idea in motion, and then discovers that it costs far more than they’d ever allowed for. Even worse is that the ideas use up all of the mad cash savings of the people involved in the show, and 99 times out of 100, the people end up going heavily into debt. And just to add delicious icing on the pain cake, it also takes far longer than anyone’s best guess ever allowed for.

It’s an old story though. Back in the day, some folks have beggared kingdoms in order to pursue such an ideal, and I saw that in action in my travels in India.

The Taj Mahal is sort of like a Grand Designs on steroids! The short story is that a Mughal Emperor (that is a bloke from Persia – or current day Iran), constructed the building over 30 years to house the body of his deceased favourite wife. The bloke had intentions of also having his own body placed alongside hers upon his demise. The building is a wonder of symmetry (i.e. the left and right sides of the building are identical). The cost of construction must have been stupendous, and unfortunately the Emperor fell ill before commencing the construction of another matching building facing the Taj Mahal – except this time in black. Whilst he was sick, his sons went to war with one another, and one son was eventually victorious. Between the building and the wars, the kingdoms coffers were probably seriously drained, and the son had the old man put under house arrest until the day of his death. And then just out of spite, the son placed his dad’s sarcophagus slightly off centre in the building just to ruin the overall symmetry. The act of the son really puts actions to the words: Once more, and now with feeling! Yes, emotions probably were running rather high in those heady days of yore, and the kingdom promptly fell into decline only to be much later captured by the British.

You can see where the path is leading in the next photo:

The area above the upper garden terrace has now been levelled, and that will make an easier job of installing some of the outer fencing onto it.

And it wouldn’t be Fernglade Farm if we hadn’t unearthed some monster rock during the excavations! One of the rocks looks like a giant rock sardine ready to leap out of the soil!

Late in the week we stopped by the local tip shop and purchased a couple of steel security doors which we’ll convert into two or three gates. The gates will be installed in the fencing around the terraces project.

Next week marks a change in the UV from Moderate to High ratings, and the salad greens are responding to the additional energy from the sun by growing at a furious rate:

The first broccoli florets that we’ve ever grown have appeared over the past few days:

* Forgive the wonky photo of the Taj Mahal. Neither the editor nor the building is drunkenly listing to the side, I just didn’t get the 35mm photo (you may recall those?) sitting correctly on the scanner.