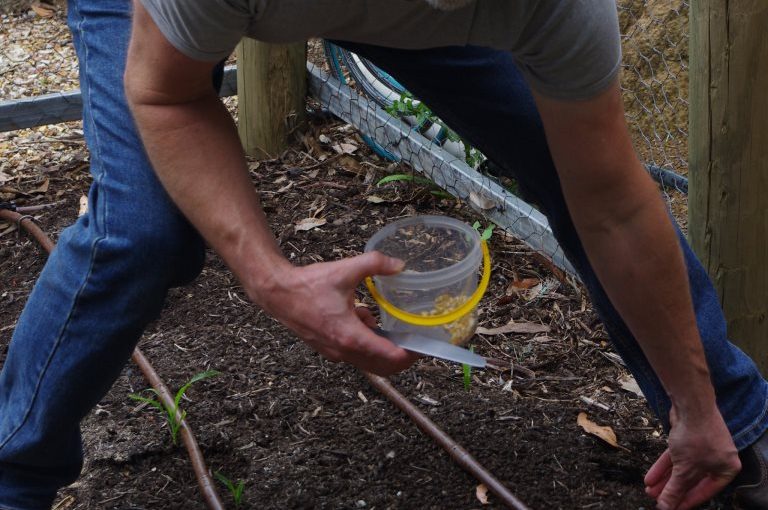 The only thing that I can be positively sure of, is that I am entirely unsure as to what the weather will hold in store for the farm. And the sheer variability in the seasons from year to year means that I make mistakes with the timing of planting.

Large parts of this driest inhabited continent are in the grip of a drought that is not quite equal to the infamous Federation Drought , but by all accounts they’re getting pretty close to it. Bushfires have become common place events in the parched country for the past few months. And frankly it is happening not that far from here. It is as if the weather Gods have turned their attention to us down under, and with a dark cackle they’ve promised: ‘Let’s just see how bad things can get’.

In this southerly locale on the continent, the spring weather is far colder than is the recent norm. Only true weather nerds will know that about mid-year there was an: abrupt warming that occurred about 20-30 kilometres above Antarctica. And in this tiny little section of the continent what that means is that spring has been mostly absent as the cold moist air has been pushed north from Antarctica.

Compared to previous years, I planted out the corn seed a few weeks ago, and it was just too early. As such I’ve had a germination rate of about 20% for corn, which is appalling when you consider that I plant out several hundred seeds. On Friday rain was forecast overnight, so I planted out yet another batch of corn seeds in the hope that the rain and mildly warmer soil gets them germinated.

Making mistakes such as planting out the corn seeds too early is to my mind part of the wonderful journey that is life. But learning from mistakes and applying that knowledge to future endeavours is an entirely different matter. And therein lay the path of the beginnings of wisdom.

Over the past few weeks the editor and I have had an ongoing conversation about personality traits, and the strengths and weaknesses that accompany such traits. With knowledge comes understanding. For example, when I was a young bloke I used to consider that I was a perfectionist. I thought that this was a good thing, until I understood that it was a personal weakness and possibly even a serious failure. In these enlightened times I now understand the Russian maxim that: “Best is enemy of the good”, but it wasn’t always thus.

Without knowledge and understanding you can make some epic mistakes. Such was my fate with one notable mistake. Every now and then people talk rubbish, and then they find themselves in a metaphorical garbage tip. Very late last century I recall sitting in an interview with a potential employer where I was talking some rubbish about wanting to have a challenge. The employer loved hearing such talk because they sure had a challenge waiting for some poor schmuck.

After extensive psychometric testing – I’m guessing they wanted to discover if I was serious about wanting a challenge – they employed me and set me loose. At first I had a great time, and I rapidly sorted out the team work problems and began trawling through and resolving the epic mess that was presented to me. It truly was an epic mess and I have never seen the likes of it before.

As the Dread Pirate Chris sailed the wide Accountant-seas, I took no prisoners as the valiant crew (my accounts team) scrubbed the decks (cleaned up the accounts and restored a semblance of order) of the good ship until the decks (accounts) shone with brilliance. I was on top of the world and rattled my shiny sabre (pocket calculator) at any and all enemies, whilst the crew supported my leadership.

Of course the role of Captain is a lonely one, heavy with the burden of responsibility. And the hours can be long, with late nights and weekends at the helm. For the purposes of morale, the crew (accounts team) were kept to normal hours and were off enjoying foreign ports (the local cafes and eateries at lunchtime and doing normal things like going home on time), whilst I kept a sharp look out for hostiles.

Unexpectedly, in the naval base (head office) a coup took place and a new Admiral was installed (a promotion of a lesser accountant). Soon the dispatches from the naval base (head office) contained a very negative tone. I rattled my sabre (pocket calculator) at the new Admiral (who was technically my boss) and talked big and tough about how many ships of the enemy fleet my team and I had already sunk (i.e. goals that we’d already reached).

My talk of past battles was breezily dismissed, and the demand was put before me to sink even more enemy ships (i.e. the performance expectations were raised). Such talk engendered thoughts of mutiny, and I was certain that the now trusty and competent crew (accounts team) had my back. I did my best to ignore that the demands were couched in very critical terms.

Unfortunately, I was already working long hours at night and at weekends, and there seemed to me to be no end to the number of new enemy ships (i.e. new challenges and goals) asked of me to sink. And the criticism was unrelenting.

At the time, the editor just wanted her Captain back, and I was just about done and finished on those particular adventurous Accountant-seas and had nothing more to give. One day out of the blue, I resigned my commission as Captain (walked the plank)  of that particularly bonkers ship.

What was really weird about it all, was that the next job I went to was so mundanely normal that the contrast between the two experiences was beyond stark. And I had to think really long and hard as to how I ended up in that earlier scenario, and to never allow it happen again. Some mistakes you learn from. Some you hope to never repeat, me hearties.

The rain this week has been torrential at times.

Yet, other days blue skies reigned, humidity was high and the air temperature was cool.

Despite the cool air, the UV (ultraviolet radiation) is now rated as Extreme, and the suns rays sting and bite exposed skin. Despite the variable weather conditions we continued work on the new path leading from the driveway to the new garden terrace project. A couple of trailer loads of the locally crushed rock with lime were placed over the clay surface. The crushed rock makes for a good all weather surface and the path is a project that serves multiple purposes, one of which is to reduce the possibility of water from very heavy rainfall concentrating anywhere at all up above the house.

Treated pine timber posts were cemented into the ground. Hopefully next week I’ll weld up some steel gates from scrap steel security doors we picked up at the tip shop, and those gates will be attached to the newly installed treated pine posts. In the meantime, over the next week the concrete holding the treated pine posts into the ground can properly cure. It is not a bd thing to allow the concrete to cure properly because the steel gates will be quite heavy.

The cooler weather this week has really slowed the growth and germination of the summer crops. At least the plentiful rain has meant that I have not had to water the plants that are growing. In an exciting turn of events, some melon seeds germinated this week.

The earliest of the black and red currants are becoming closer to being ripe. Currants are usually ripe and ready to eat by about Christmas, although rather than eating them, we turn most of the prodigious crop of berries into a very tasty wine.

Gooseberries are also getting closer to being ripe. I quite enjoy the taste of Gooseberries and they remind me of Sultana grapes (a dried variety of table grape). We may have enough of this crop this year to produce some wine, and it will be interesting to see how the wine turns out.

Blueberries are really slow growing plants here, and possibly I should have grown the many plants in a shadier locale. Some of the blueberry plants have died, but the ones that didn’t seem quite well established now after a few years and are producing plenty of berries (which are also not quite ripe yet).

After killing about maybe five (it could possibly be more) walnut trees, I have finally managed to get a seedling walnut tree to take. I can’t quite understand why I’m having so much difficulty with these nut trees because there are many huge and old examples of walnut trees happily growing in the area apparently without any care or thought.

The tree ferns which I planted in the fern gully have all produced new fern fronds over the past few weeks. I thought that some of them may have died over the winter months, but no.