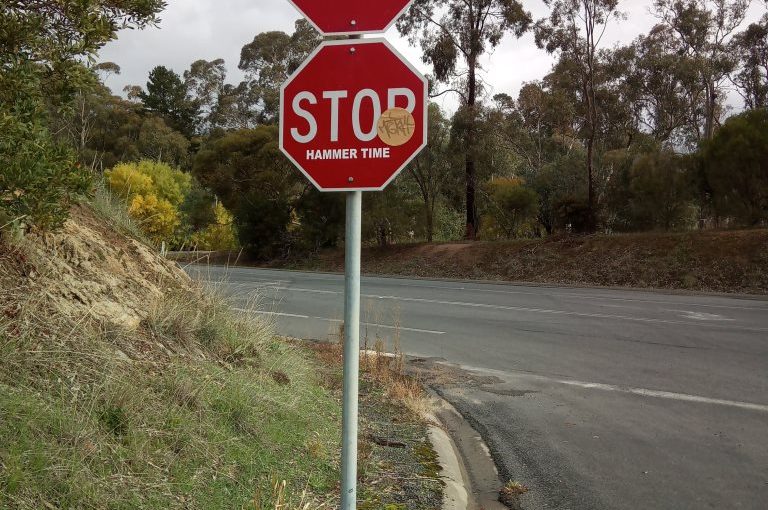 When you live on the underside of the planet, things are different. Europe and North America, well they’re heading into Summer. However, in the Southern Hemisphere, we’re heading into winter. And over the past week an Antarctic blast has delivered cold air and serious amounts of rain.

One of my pleasures is reading a book at a cafe. I do most of my book reading in cafes. It is very civilised. On a cold winter’s morning, you can dive into a book whilst supping on a coffee and enjoying some yummy food, whilst occasionally glancing out the window and thinking to yourself just how horrid it is out there.

Cafes down under often have seating outside the building. On warm days it is quite the pleasure to read a book, enjoy a coffee whilst the sun gently kisses your skin.

Unfortunately with the times that we currently all find ourselves in, cafes down under are a take-away service only. And winter arrived early this week. So there the editor and I were at the local General Store / Post Office on Saturday morning to pick up the local newspaper, check the mail and grab some milk. Whilst we were there, we ordered some take away coffees.

The sheer waste that is a take-away-use-once coffee cup is to my mind an abomination. But then just to add to my misgivings, the Antarctic blast meant that it was 3’C / 37’F outside and the rain was drizzling. In these times, we waited patiently ooutside the building under the veranda, whilst the staff inside the toasty warm building prepared the coffee in an abominable take away cup. Hardly inspiring conditions to enjoy a coffee, but local businesses need local support in these times and so we just sucked it up.

Anyway, we’re tough and have lived up in the cold mountains north of Melbourne for so many years that we’re now used to the cold weather. During such cold weather, the editor and I play a game which runs along the lines of: Guess how seriously heated that person’s house is. It is an easy game to play because you make a solid assessment based on what a person is wearing in the cold conditions.

Both the editor and I were dressed up in what I amusingly describe as dead sheep gear. That’s my fancy name for woollen clothing. So despite the cold temperatures, I was snug in my genuine vintage sheepskin jacket and Irish woollen hat. I have an unnatural love for that jacket and I’ve told the editor that if the house is burning down, and she can get to it and I can’t, just do what you can to rescue the sheepskin jacket. Some things are irreplaceable!

The editor was likewise dressed up in dead sheep gear. We could not read a book or the newspaper due to it being take away only service plus it was just cold and rainy. However, we were still toasty warm. So there we were in the biting cold enjoying our take away coffees when a local lady remarked to the editor that she had: Fluffy Red Shoe Envy. Hmm.

The local lady was admiring the editors fine choice of footwear on that cold morning. And the editor was toasty warm because she was wearing her locally manufactured red sheepskin boots. There is nothing like genuine sheepskin to keep you warm in really cold conditions. Plastic replicas need not apply. Anyway, I’ve long since noted that plastic clothes do not keep people as warm as natural fibres. Plastic however is notably cheap.

Bizarrely enough and despite the stated envy, the local lady could not obtain a pair of the editors boots even if she wanted to. The manufacturer closed for business a year or so back. The business had manufactured for years and years out of an inner city warehouse, and I too had bought sheepskin boots from their factory outlet store at the front of the warehouse. And the shoes have just lasted and lasted. They’re good quality shoes. But now that they’re no longer manufactured locally, I treat the boots very carefully because like my vintage sheepskin jacket, they too have become irreplaceable items.

The business had a long manufacturing history, but eventually the property was sold off and may have even been converted into an apartment building. It is a funny world where it is more profitable to sell off a property as sub-standard housing stock, rather than using that same property to run a business.

Many long years ago I worked as a manufacturing accountant for a company that produced ladies boots. As a consequence I now know far more about womens footwear than I probably should, perhaps even more than Al Bundy. But one thing I learned was that the locally made boots were produced with care, and the quality was good. The business however just couldn’t compete with cheap plastic imports, and quality rarely factored into that equation.

It was a sad thing to watch a factory getting packed up and sold off, and it wasn’t the last factory I watched that happen too either. A lot of skilled people were put out of work, and many of the machines were consigned to overseas purchasers. That’s what you get with the policies of globalisation, and to my mind it is a race to the bottom to take advantage of ever cheaper labour rates and / or disregard for their environment.

But then here we are today with closed international borders and uncertainty arising out of the exposed long supply lines. And so I’ve been wondering: Do we as a society have what it takes to begin manufacturing fluffy red sheepskin boots again?

Later that day after the fluffy red shoe envy encounter, we took to the road to visit a nearby specialist fern nursery. Over the past few years I’ve been planting up a gully with all manner of ferns. You can’t be Fernglade Farm without ferns! The specialist nursery has a huge variety for purchase, and the fellow running it is a nice bloke.

The fern gully is an important component of infrastructure on the farm as it captures water that collects on the road above the property. The fern gully slows the movement of water reducing potential erosion and allows water to infiltrate into the soil. And long term readers may recall that the fern gully sits directly above the sunny orchard. All that water stored in the ground means that I rarely have to apply any water to that particular orchard.

Last week I mentioned the new soap shaker device. This old-school contraption produces soapy water for use in washing up. And best of all it can use the soap that we make. Of course, now that we are using more soap in the soap shaker, we have to make more soap.

The large pumpkin enclosure produced an enormous amount of fruit this season. But now with winter fast approaching, the vines are dying and so the fruit was harvested and the vines were mulched up and returned to the soil.

A small red Honda push mower was used to mulch up all of the vines.

It is really hard work pushing that mower through the vegetation. I begin the first cut at a high setting and then slowly lower the cutting height.

The soil in that enclosure is some of the best on the property as it has been fed with compost and woody mulches for about four, maybe five years.

Over the next week, we’ll place a layer of mulch over the entire surface of the soil. That should feed the soil as well as protect it from sun, wind and rain.

There were so many pumpkins and squashes that we almost filled the smaller trailer attached to the low centre of gravity mower. The machine struggled bringing all of the produce back up the hill.

The pumpkins and squashes were all grown from seed saved from last years harvest.

During the mowing of the vines I accidentally ran over a pumpkin that we’d somehow managed to miss. You can see the partly run-over pumpkin in the plastic tub in the above photo.

The rain has been very intense this week, and the other night the ground was so saturated that even the earthworms were making a break to the surface for some air.

And in these days of impending winter, the fluffy collective also appreciate fluffy fur:

Living in a rural area has its advantages and one of them is knowing which farm gate sells what produce and when. The other day we went in search of bulk supplies of honey, and during that journey we spotted a very unusual and amusing road sign…