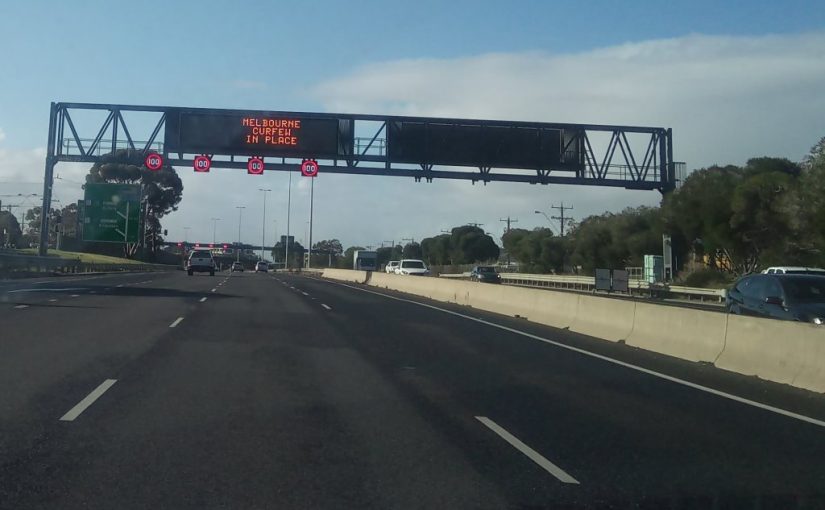 Maybe it is just me, but the party vibe down in the big smoke of Melbourne is way dead.

It is kind of funny, but people living in the big smoke of Melbourne usually head out of the city and up to the countryside for relaxation so as to immerse themselves in nature. The editor and I on the other hand live with nature up to our eyeballs, so we occasionally stay over night in the city and dine out at some of the lane way restaurants and cafes. For us it is a real pleasure to enjoy a leisurely breakfast, supping a quality coffee, whilst watching the myriad denizens of the fine city go hurriedly about their mysterious business.

Well that small enjoyment ain’t going to happen now, or for the next month and a half at the very earliest. As of last Wednesday night the city is in Stage Four lock down with an 8pm to 5am curfew. Apparently the politicians have suggested that there is no Stage Five, and I guess that means that there is definitely no Stage Six, although some far left historical leaders such as Stalin, might suggest that such a thing is actually possible.

A guy I once knew remarked to me casually that he really loved signage. He may have been putting up a sign at that very moment he made that statement. Anyway, the signage over the freeways leading into the big smoke, has been relentlessly reminding folks about the health subject that dare not be named.

Staying home is kind of difficult in my professional capacity, so my business activities have been rather throttled. Whilst my profession has been choked, I did notice another sign above the freeway suggesting that a career in the police force may be a valid option. Apparently there were something like 3,000 positions recently made available. With declining tax revenues and burgeoning budget deficits for the State Government, I do wonder how all those additional government jobs are going to be paid for. Fortunately that is not a problem for me although I am leery of the large fines being handed out. But I must say, the advertising is rather natty.

The advertising billboard makes the suggestion and contrast that anyone who can learn to deal with the public in what looks to me like a fast food outlet, will most certainly be a battle hardened veteran when in a police uniform. Both the editor and I worked retail in our youth, and it is a tough game I can tell you. Anyway, the state government will probably need all those extra police because the city now has an 8pm to 5am curfew.

If someone had told me six months ago that the city would have an enforceable curfew placed on its citizens, I would have doubted the persons sanity. But here we are today, with a curfew in place. It has been a swift ride from ‘the world’s most liveable city’ to ‘the city with the strictest lockdown in the world’. We don’t do things by halves.

The first time I’d even heard of the concept of a curfew, was when an old mate worked for a while in Port Moresby, which is the capital city of the country of Papua New Guinea. He recounted stories to me of hardship whilst in the fine city because the authorities used to lock down the patrons in the bars and clubs, and my mate was totally good with that. Outside in the streets, apparently heavily armed forces used to patrol. Inside the bars and clubs the party vibe was pretty good by all accounts.

It has been many years since I spoke with my old mate. We became fast friends because we used to walk to primary school together. On weekends we used to hang out at the pinball machine / arcade games amusement parlours. We even used to travel all over the place and get up to all sorts of mischief. Fun times.

My mate always used to know lots of people. He vouched for me ‘as being OK’ when I left home and moved into a share house with four other people. I can still recall telling the landlord that the party days were behind us – yeah, we lied. The house had a good party vibe and I got to meet many fascinating people.

Two of the people in the house had a very dubious background apparently verging on the criminal, but they were really entertaining and fortunately for me they took me under their wing. I’m nothing if not a fast learner, and under their social tutelage, it wasn’t long before I could talk rubbish with the best of them. Talking rubbish after all, is a serious and prized skill.

Over time I drifted away from friendship with my old mate, and perhaps I did spend more time with my new best friends. Our friendship became strained and eventually broke. But before it did, my mate began apparently copying some aspects of my life.

By my nature I’m not a competitive person and I set my own goals. Other people feel differently and that’s fine. When I used to work in the top end of town, the editor wanted to own a classic car. So we purchased a 1974 Porsche 911 to sate that desire. It was a beautiful machine, but the repair bills made my eyes water and so we eventually sold it – at a considerable loss.

Anyway, my mate likewise decided to purchase a Porsche, except he bought a 944 model instead. A fine machine in my eyes, and much newer than the car we owned. I would have enjoyed it. However another friend quipped one day: That’s a poor man’s Porsche, and my old mate looked gutted.

But then there was the house situation. The editor and I used to purchase houses that were serious dumps, and we’d fix them up, structurally as well as aesthetically. And we’d do most of the work ourselves in the hope of making a profit so we could get out of debt. The last place we did that too was in a very cool inner urban suburb.

My old mate purchased a house in the less cool, but more affordable end of the suburb. As our friendship had become strained, I hadn’t yet been invited to the house. Then one evening, as the editor was walking home from work, my old mate approached the editor and invited her to check out the house. It was all very friendly and above board.

Later that week following the unexpected invite, the editor and I were at a party. There was a good party vibe there. My old mate casually asked the editor loudly in front of the assembled gathering what she thought about his new house. Quick as a flash, for the editor is nobodies fool, she replied: “Yeah, it was alright”. And that was that.

It has been a very cold week at the farm. A large chunk of Antarctic cooled air drifted north from that polar coldness. The fancy technical word for this sort of weather anomaly is a: Cut off low. And far out there have been some cold mornings:

The morning wasn’t as cold as it can get here, but it was pretty close to it. It sure was even colder in the valley below the farm where the cold air falls overnight and accumulates. In a bizarre twist of fate, it is warmer at this higher elevation.

Snow flurries fell for hours, however the ground was too warm for the snow to settle and accumulate. The snow looked great though:

We’re tough here, and don’t let a little bit of cold wet weather stop the work on the farm. Over the past few weeks we have been working on the path up above the house. It is a very long path which begins at the driveway and ends up near to the forest on the other side of the garden terraces project.

This week we created a huge soil bridge so that the driveway and the path were on a similar contour (the fancy name for being on the same level).

Two days of digging and moving soil created a nice flat ramp which connected the driveway to the path up above the house. Onto the surface of the soil we placed a cubic metre (1.3 cubic yards) of the locally quarried crushed rock with lime.

Some of the soil for the work was removed and relocated from the path widening activities.

The thick clouds meant that we didn’t really have enough electricity from the solar panels to utilise the electric jackhammer. So, all of the work was done with hand tools. The generator was fired up to put some life back into the ailing house batteries. The batteries need to be replaced, and soon. This renewable energy stuff makes no economic sense whatsoever.

We still need more of the locally quarried crushed rock with lime to place over the surface of the path, but I reckon it is looking very good.

Some of the crushed rock was placed on a path at the other end of the property.

Crushed rock was also placed on the surface behind the second last steel rock gabion cage. The new greenhouse project will be sited on that flat bit of land.

Despite it being very cold, the colourful parrots still live on the farm and enjoy eating all of the dog manure. Ollie the Australian cuddle dog (who is actually a Bull Arab), being a large dog, must be supporting at least four parrots. The dogs and parrots enjoy a symbiotic relationship as the birds provide hours of entertainment for the sheep dog pups: Ruby and Plum.

Down in the valley below the farm I spotted a large herd of deer. The stag is enormous and Ollie has had to chase off this herd out of the orchard from time to time. That is one of his jobs.