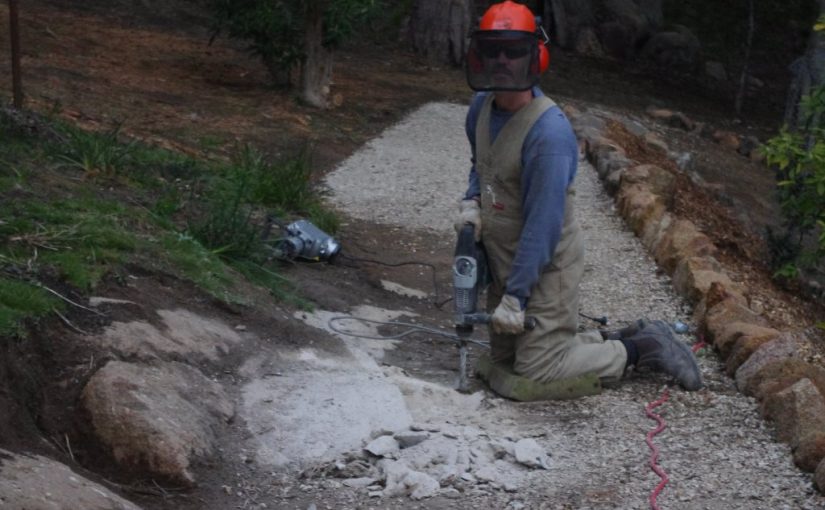 Ollie the Australian cuddle dog, is actually a fearsome Bull Arab. The particular variety of dogs was bred in the far northern tropical parts of this country, for the purpose of chasing down and detaining feral pigs. Alas for poor Ollie, there are no feral pigs roaming the colder southern forests of the Central Highlands of Victoria, so he gets to enjoy hanging around the farm and submitting manfully to the occasional cuddle and pat.

Ollie likes being patted and attended to, and he is without doubt the most gentlemanly dog that I have yet encountered. His two side kicks, the girlie Kelpie sheep dog puppies are right little terrors when compared to Ollie, but they’re also really young and as such can be forgiven the occasional outburst of youthful exuberance and high jinx. Anyway, from time to time, I’ll see the puppies hanging off Ollie’s ears or jowls. His skin stretches under the puppy weight and I do wonder whether Ollie will be permanently disfigured. But then a dog that is bred to chase down and detain feral pigs could probably stand a few scars. That look never hurt Al Pacino.

The other night, Ollie was standing in front of his bedding and he refused to settle on it. As Ollie is a true gentleman he rarely complains about misfortunes, tragic circumstances, or even inconveniences. Upon closer inspection of the bedding, it became apparent that one of the sheep dog puppies had urinated on the sheepskin covering – possibly out of malice. Who did this Ollie, became the most important question. And without hesitating, Ollie moved closer to Plum, sniffed her rear end and proceeded to bite her face. Plum looked surprised but resilient to his remonstration. Punishment was swift. Oh they’re wilful those two pups.

Since the former boss dog Scritchy, departed this mortal life, we’ve been busy training the two young sheep dogs. It has been an interesting ride and the two dogs have their own opinions about the world and how things should be. Fortunately for them expectations are low and they have no option but to accommodate themselves to becoming socialised and accepting a few boundaries and limits. They’ll get there, but right now the word ‘wilful’ keeps coming to mind.

Some folks take a very stern approach to training sheep dogs. Sometimes that training involves breaking the dogs spirit. It’s an option, and usually involves chaining the dogs up for hours and hours each day. Middle ground can be found though, and that involves ensuring that the dogs understand what is required of them, and that they accept limits on their behaviour. The flip side is that unthinking obedience is not a perquisite to life on this farm and the dogs can enjoy unstructured time where they pursue their own doggie interests. Most of the dogs here get to that middle ground sooner or later.

Socialising is an important skill that needs to be taught. During the grunge era of the mid 90’s when chronic unemployment was the name of the game, garage bands roared away angrily on the ‘down with the kids’ airwaves. Lack of decorum was part of that story and an angry youth could get away with wearing stomping boots, jeans and flannel shirts to the local cafe to get a proper coffee. Even the editor wore such attire, to good effect too. Anyway, nobody back then had coffee machines at home because they were too broke to afford one, and so cafes it was, albeit in full flannel shirt outrage.

Except there was that one time, where an older lady who was probably more decorously attired, was also enjoying a proper coffee at the cafe, wasn’t scared of our flannel shirts, arrogant youthful expressions and our mouthy Dorgie ‘The Fat’ (a Dorgi is a cross between a Dachshund and a Corgi). The older lady approached us and she appeared even more angry than we were pretending to be, and she complained: Your dog ruined my cafe experience. How as an angry youth are you meant to reply to such forthrightness?

Back then The Fat was the boss dog (of four iterations ago) and had been chained up outside the cafe and had been kicking up a righteous sook. The canine sooking clearly had dismayed the older lady and possibly ruined her proper coffee, and rightly so she went straight to the source of the problem (the editor and I) and remonstrated with us.

The critique was accompanied with mild feelings of consternation. Had we done wrong by the older lady? After a brief moment of introspection, turns out we had done wrong. Still, old dogs can learn new tricks and so the sooking dog incident was never repeated. That doesn’t mean that we didn’t make new and interesting mistakes, just not that one again!

In the early stages of the lock down due to the health subject which dare not be named, we used to regularly encounter a guy I nicknamed: ‘Laptop guy’. He used to frequent the local general store where I’m guessing he was using the free wi-fi service from the nearby telephone booth. When table service was stopped and the store became take away only, there was this out of the way park bench which became highly sought after hot property, and all the locals knew about it. And laptop guy was all over that park bench like a bad smell which had outstayed its welcome.

The thing is he had his routines and so we decided to get to the park bench first before laptop guy. It really was, and still is hot property that park bench. Laptop guy observed us enjoying our proper coffees in the freezing cold winter morning whilst seated at the park bench, and for some reason he allowed his large dog to enter our personal space and threaten our proper coffees. ‘Get rid of it’ spoken menacingly from one who once wore a flannel shirt and listened to angry garage bands at slightly above normal volume, was all that it took for for the guy to withdraw his dog. Haven’t seen him recently, so he might not have been local, but after that experience, he began attempting to make a better impression. He had learned a bit of socialising skills right there.

My grandfather, who candidly could also have used some socialising skills, would have called ‘laptop guy’ a rather naughty and family unfriendly name to his face before any interactions took place, thus preventing the possibility of any potential social problems ever cropping up. After all he was fond of calling people such names, even the grand-kids. He may have been right with that policy of social domination, but I don’t really know and instead just try and discover and reach the neglected middle ground.

Last Wednesday a herd of about a dozen deer visited the farm. The deer are now well established in the forest and I doubt they could be eliminated without a lot of effort. Local legend has it that they apparently escaped years ago from a deer farm in the valley which went out of business.

Ollie serves an important function on the farm, and being a large and powerful dog he has absolutely no problems at all chasing a herd of deer off the property. Like Dirty Harry, I enjoyed telling the herd exactly just who’s gonna stop ’em: Me and Ollie! Noting that much like Smith and Wesson, Ollie does most of the work.

The weather this week has been warmer, but also far wetter. The continent is getting a drenching, and this always happens after the sort of epic scaled bushfires the east cost of Australia experienced earlier in the year. The fires put an enormous amount of particles into the atmosphere and there are consequences for that. As the poem says about this continent: A land of droughts and flooding rains… Indeed.

The widening and extension of the path which runs up above the house from the driveway all the way over to the far side of the property is now complete.

Earlier in the week I spent hours and hours with a rotary hammer drill and electric jackhammer breaking up the Moby (body) rock which was sticking up in the middle of the path.

That rock must be the hardest granite on the planet, and the work extended over two days. It was a relief to get the job done.

The original intention was to construct a steel rock gabion cage over the rocks on the edge of the path, but that seemed like a whole bunch of seriously hard work. Instead we spent laborious hours recovering very large rocks and then rolling them into position in a new rock wall on the upper edge of the path. After half way, the path looked pretty good (although unfinished):

Observant readers will note in the above photo that a black dotted line has been painted onto the rock sticking out into the path.

Yet more work broke that section of rock off the monstrous rock shelf that it was attached to. Then even more large rocks were recovered and rolled into position. You can also see in the above image that fresh soil has been placed behind the large rocks.

A thick coating of woody mulch supplied by the nice electricity company was applied over the soil which sits behind the large rocks.

The relocated soil was recovered from further along the path where the editor and I had decided to remove an unnecessary (and also mildly dangerous) curve in the path. The path realignment provided an enormous amount of soil which fortunately could be placed behind the large rocks. And being on the same path it was all moved on contour using wheelbarrows.

A few trailer loads of the locally quarried crushed rock with lime were placed over the surface of the path, and it is now a true all weather path and looks great.

A huge amount of small rocks were created and also excavated this week, and the second last steel rock gabion cage is rapidly filling up.

In our very local travels we managed to score a huge box of seconds Pink Lady apples, and have eaten many of them and also produced a 25L (about 6.25 gallons) batch of apple wine. It is good stuff and should be ready to drink in another year.