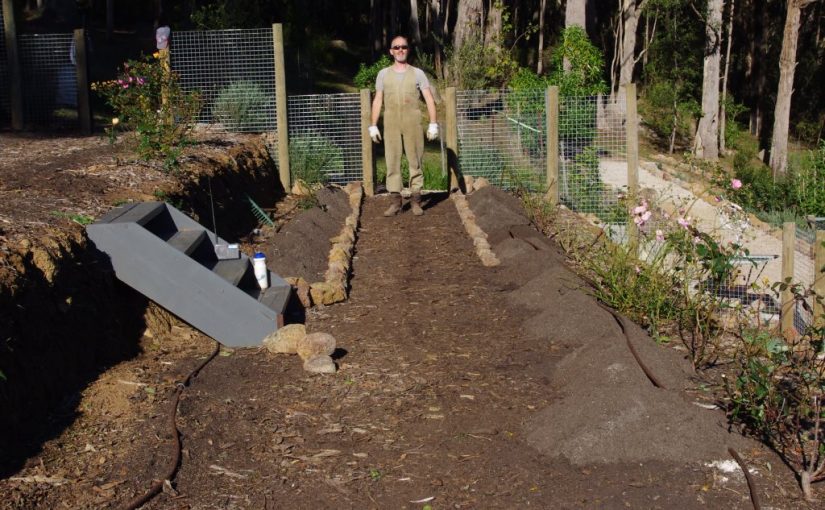 If it is ever going to snow, and some years it doesn’t snow, then August will be the month when it happens. August is the coldest month of the year at the farm. I’ve been thinking about cold weather because we’re now only a month out from the winter solstice. Each day, the sun is ever slightly lower in the sky, until eventually it will reach the nadir of the winter solstice, before beginning to climbing higher again.

On Saturday there were small patches of frozen grass in the orchards, and from this higher altitude I could see that frost was widespread in the valley below. It is a weird quirk of nature that cold air becomes heavy, and so it falls and pools in the valleys way below the farm. On those mornings, the higher mountain saddles can actually be warmer than the frosty abodes below. Despite that, the patches of frozen grass in the orchards sure mean that winter is fast approaching.

A decade ago I volunteered for a few years as a fireman. It was a good way to get to meet the locals and form some connections in the area. After all the upside of providing your time and labour free of charge was that you benefited from the social contacts. The head honcho at the time remarked appropriately that the service was part emergency service and part social group. Then along came the truly astoundingly awful Black Saturday fires in 2009, and the culture of the service appeared to change. My experience was that the social aspect was shunned. A Royal Commission full of heavy weight legal folks (probably none of whom lived in the bush) investigated the fires, and eventually volunteering became much like an unpaid job to me.

August is the coldest month of the year, and I recall being at a meeting where snow was gently falling outside the fire station shed, and someone mentioned that: ‘it was going to be a bad fire season’. Trying to reconcile those words with the certain knowledge that it was snowing outside, was probably a bit much for my brain. And eventually after a few years, I handed back my firefighting gear and did something else with my time.

In rural areas you end up getting social contact and making connections through different mechanisms than would otherwise work in a city. It is a marked difference, and in a rural area it can be quite surprising just how many people know of you and your business. As a former city boy, it took me a long while to come to grips with this reality. But these days I get my social contact where I can, and so I enjoy brief regular chats with all manner of locals.

The other day I was speaking with a guy who works around these parts as a mechanic, and he made the observation to me that he was: ‘under the pump all of the time nowadays’. Being under the pump is a colloquialism to describe that he faced a never ending stream of work. Mate, I hear you about that!

A person needs downtime, and one of the reasons I left employment in the big end of town was that I was being asked to both work and cogitate upon the businesses problems and systems all at the same time. Unfortunately, I’m limited and was able to do one or the other, but not both at the same time. And because the work was never ending, the cogitation time hung around for me in the background of my brain on weekends and at night. I wanted my weekends and nights back, and so eventually I went off and did something else with my time.

When I first entered the adult workforce as a young bloke at the age of 17, work was not anywhere near as unrelenting as it is today. There was time for relaxed drinks on a long Friday lunchtime which inevitably stretched into the afternoons with my coworkers. That might not be the case these days.

Fortunately, this week it has been something of a relief to me to be having a quieter time on a work front.

The health subject which dares not be named put an end to any quiet time at all last year, and so I’ve been under the pump since March over a year ago. The editor and I were required to navigate the various government imposed red tape systems on behalf of the many small businesses we service. The government in turn sagely advised the small businesses to: ‘just ask your accountant’. Except that we just had to figure it all out on the fly and then assist lots of people who, like us, probably had higher than normal blood pressure.

Meanwhile the city was in lock down for four continuous months and there was a genuine travel ban and serious night time curfew placed on the denizens of that city. The editor and I lived outside the city limits in a rural area, and so we were subject to less restrictive policies, but all the same, the regular experience of having to display my identification and papers to military and police personnel on my once per week trip into the city was an unsettling experience. Probably didn’t do much good for my blood pressure either.

I don’t believe that the pain has been distributed equally. My day to day experience was filled with people who were wondering whether or how their business would survive the government response to the health subject which dares not be named. Their blood pressure was probably not good either.

The other day I heard a third hand account of someone who works in one of the big banks. The account sounded to me like working from home meant looking after the kids and getting paid for it. In small business I get no benefits, so that if I don’t work for whatever reason, I don’t get paid. I accept that risk, but hearing that people in big corporates get paid to ‘work from home’, when that means doing things other than working, kind of annoys me – a lot.

But what will be, will be, and whilst I don’t enjoy the benefits of getting paid not to work, at least I don’t have to work for such a behemoth. And I’ve experienced being made redundant from such a behemoth during the darkest days of the recession of the early 1990’s so I know that the benefits today, can be gone tomorrow. They’re all care and cuddles, until the poop hits the proverbial fan, and then you become inconvenient.

With the strange experiences of the past year, and first hand experience of the even earlier dark days of the recession ‘we had to have’ in the 1990’s, I try to forget the inequality and just go off and do something different with my life. Fortunately, the gardens here call to me to continue working on them, and by spring I’ll show you a garden that’s bursting into life.

I’m continuing to take it easier on my shoulder whilst it recovers from the recent injury. What this translates to in reality is that the heavy infrastructure work has stalled. Work continues though and this week we are in the process of getting the garden terraces ready for the next growing season.

Last week, we’d removed the tomato vines from the fourth highest garden terrace. It was a bit of a mess really, and there were hundreds of unripe and frankly unpleasant tasting tomatoes left on the garden terrace, not to mention the weeds.

This week the tomatoes and weeds were cleared from the garden terrace. We’d also decided to formalise the path running down the middle of the terrace with rock walls and a surface of the locally quarried crushed rock with lime path.

A string line was strung and we began laying rocks along the new rock wall for the path. Unfortunately, Peak Rocks is very real and we rapidly depleted our available rock reserves.

Observant readers will note the many soil mounds in the above photo. Last year when the garden terraces were hurriedly pressed into use, we hadn’t really given the soil a good feed. We’re now making amends for this by giving the soil in these garden beds a very good feed.

Mixing up the soil feed was a bit like a production line, except that it took many hours of mixing and hauling. The soil feed contains eight ingredients:

And all that makes up about 25 wheelbarrows of soil food. It is not a perfect soil mix by any measure, but it is good enough, and at least I can source the materials locally. Incidentally, the fourth and fifth garden terraces will require about four loads of the above mix, but in future years I expect the demands won’t be anywhere near as high again.

One of the other things we’re changing on this garden terrace is to move the roses from the downhill side of the central path, to the uphill side of the path. The soil on the downhill side of the garden terrace is warmer because it receives more sunlight, and as such it is valuable growing space for vegetables. And whilst we are moving all of the many roses, we’re increasing the spacing between each rose from 800mm (31.5 inches) to 1000mm (39.3 inches). The original spacing was based on roses planted out in a nearby botanical garden. This was an error on our part, and here the roses require much more space to grow properly.

The local birds are always alert as to what activities we are up to around the farm. The editor mowed the area up above the yet to be completed utility area. And just after the editor had moved away, a family of the local Kookaburra birds moved in to investigate.

The birds on the farm are generally not migratory, and so they are around all of the time. From some respects this is a good thing as the reduced feed over the winter months sets an upper limit on their population. I dread to think at how quickly an endless number of parrots would strip the gardens and orchards of any produce, so fortunately their numbers are within reason.

Leaf change is almost over, and I can sometimes see what the tourists want.