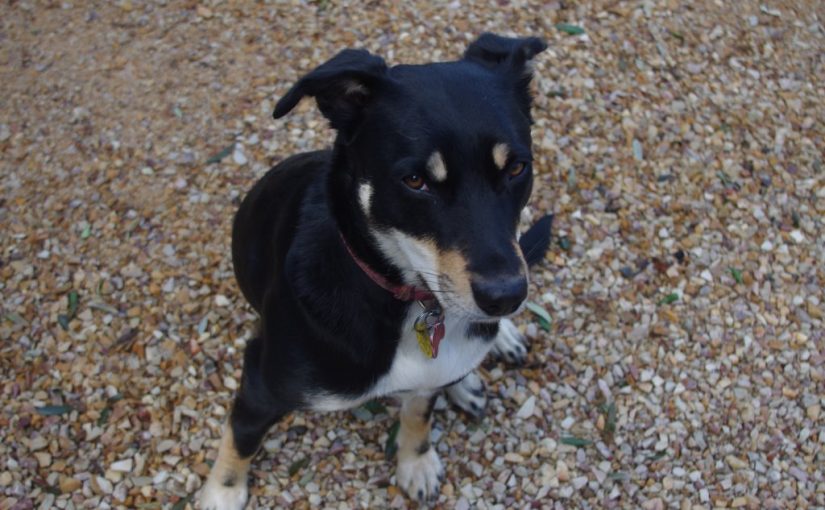 What did you say there Plum girl? What have you been reading on the interweb anyways? Are you seriously suggesting that in the future, dog food will be delivered by drone, and we’ll own nothing and be happy? You’re my sister Plum, and we’ve known each other since way back when, but that’s the stupidest idea I’ve ever heard. I tell ya girl, I’m not going hungry just because some Wedge Tail Eagle decides to take out my breakfast drone. No way at all! And anyway, I own stuff, like leather boots.

The editor thought that she could trick me by removing the leather boots from my bedroom. She didn’t know who she was dealing with. Ruby, boss dog, that’s who. Yo, listen up, I’m the boss, not the editor. The leather boots proves it. Editor decides to take away the boot from me, and in my crafty bossness, I woke up the editor every night until she relented, and returned the boot to me. I own the boot, and the boot is mine! As everyone who is anyone knows, a leather boot is important for playing soccer practice in the wee hours of the morning.

Am I not beautiful? Of course I am beautiful, it goes without saying. I’m also the boss dog. Plum my sister, and the much larger Ollie dog are my minions. And if Plum needs stalking around the couch, well a stalking she shall get. Then she’ll get pounced upon. I keep the fun factor on high at this here farm, and whenever I step into the room, the party vibe goes way up, and the other two dogs look kind of nervous. As they should be, for I am the boss dog, and they aren’t.

Some may call me by the name Miss Fun, but I ain’t gonna miss no fun, so you better call me: Captain Fun. Or else…

The job of the Fluffy collective on the farm is to stay alert for intruders. And we are like, so onto that business. Rabbits have been a problem lately, and so I’ve been drilling Plum and Ollie on how to catch a rabbit. And despite Plum’s notable anxiety issues, a few days ago she took down her first rabbit. She’s fast, that girl.

Then, in an unexpected twist of fate, she promptly lost the rabbit to the much larger Ollie. I don’t mind what goes on with those two, as long as they’re following my instructions. And the standing instructions right now are: Kill rabbits. Kill them all.

Sometimes though, those two dogs push me, they sure do. Hunting rabbits does not involve digging holes in some of the garden beds. Well, at least I tell them not to get caught doing that. Unfortunately, they sometimes do get caught doing just that, but I don’t get into trouble, that’s their business with Chris and the Editor.

And Chris and the Editor need training too. Whenever I need extra food, I nudge them, and one of those two hands over the extra food. My servants… It sure does takes a proper amount of food to keep this here Kelpie body, hot as.

Speaking of food, as boss dog, I ensure that the other two fluffies get fed first before I get stuck into my food. This of course is the natural order of things. And whenever Plum hesitates to suck back her food, I give her death stare number three. It’s always effective, and Plum just has to suck it up, or else.

The other primary job those two dogs have is to keep me warm on cold winters nights. Ollie is particularly soft and warm. Even though he is my minion, I like Ollie, and Plum too.

Yep, expect the unexpected is my motto. Sometimes just for fun I’ll run around and around the chicken run and at the last second bounce off the steel mesh. The steel mesh makes a great crashing sound, and the chickens will know in no uncertain terms, that Ruby is in the room! Unfortunately the steel mesh is super strong, as I’d really like to eat the chickens.

Well, that’s about it folks for the fluffies update. Rabbits, killed and eaten – tick. Ollie lounged upon – tick. Chickens not eaten – tick. Plum stalked around the couch – tick. Leather boots chewed – tick. That sure is a lot of ticks, and I plan to eat more chickens, sorry, I meant tick more things off the boss dog list real soon.

Thanks for the update Ruby, and no you can’t eat the chickens.

It’s been an interesting week, whilst the weather has been mostly pleasant. We continued cleaning up the surrounding forest and burned off an inordinate amount of fallen timber. The timber was too wet and decayed to be converted into firewood for the house, yet, if a bushfire comes through, the stuff will burn very hot indeed. Given the bonkers scale of bushfires over the past century and a half, it is simpler and easier to clean up the forest in the first place.

The local general store was visited on Thursday a week and a half ago by a person infected with the health subject which dares not be named. Fortunately the editor and I were not there at that time. The business premises were subjected to a deep clean, shut down for a few days, and some of the staff are now in isolation at home. The business has reopened a few days ago as take away only, until I’m guessing they get their staff back out of their fourteen days of isolation.

The nearby city of Melbourne with its five million or so residents is still in lock down with a nightly curfew, and has now become the most locked down city of all – anywhere. It is a notable, if somewhat dubious achievement.

Other rural areas surrounding the farm have been also chucked into lock down, but fingers crossed, we’ve managed to escape that fate in recent times (but have also been locked down in the past for months on end). The editor and I headed north into the next local government area to take a better look at the ruins mentioned in last weeks blog.

We did the Dirty Dicks, and also the Garfield Mine walking tracks, and they were fascinating glimpses into the industrial past of the nineteenth century gold rush era.

The forest surrounding the Garfield water wheel ruins were littered with ruins which date back to the gold rush era. Way back in those days the area would have looked vastly different than the slow growing regrowth forest that it is today.

What interested me was that the buildings were usually rather small. Most of them had an alcove for a fireplace so I’d assume the inside was warm on cold winter nights. Some of the buildings showed signs that the stones were originally mortared with clay and straw, so I’m guessing they were reasonably watertight. It interests me that the larger and more usual seen Victorian era houses were not located in the forest, but were located in the nearby township.

Mine shafts were dotted throughout the forest, and only the intrepid adventurer would dare walk that forest on a dark night.

Some of the mine shafts were quite large, but I did wonder if folks back in those days were shorter than I, because I got the impression that working in the shafts would have been a bit of a squishy proposition.

There was even one mine shaft where a tree had taken root above it and was sending down its root systems. Given it a couple of centuries of uninterrupted growth, and it may begin to look like the ruins at Ta Prohm in Cambodia.

That part of the gold fields has some very dry and extraordinarily hardy looking, but also very slow growing, forest. The forested environment is very different from that of the farm. Most of the trees date back to the 1940’s from what I was reading about the history of the area. I spotted one tree which had enormous burls, like giant warty growths right up the trunk. The burls are highly prized by wood turners and wood carvers. It was a very interesting walk on a pleasant early spring day.

The spring weather is slowly warming up at the farm. Some of winter crops are now producing strongly with the warmer weather, and two new crops I trialled this year have impressed me. Purple sprouting broccoli and Kale.

The summer crops are all being raised from seed this year. All of the seeds are now in the greenhouse doing their thing.

The first tiny tomato seedlings have emerged over the past few days.

The greenhouse has been an absolute game changer for seed raising purposes. And this year we have been far more neat with the arrangement of the seeds, and so have planted even the tiniest seeds in a neat grid pattern within their growing trays. It has been very pleasant to have the time to do this particular job carefully and properly this year.

We’ve begun the job of mowing the three orchards. The fruit trees are looking great, and growing very fast this year (due to prodigious quantities of soil feed). Fruit set on the early varieties of fruit trees might not be that great this year due to a recent heavy hailstorm which knocked some of the blossoms and tiny fruit from the trees. Time will tell how that all works out. Some of the later fruit trees are just beginning now to break their dormancy. Those trees might be the smart trees in this particular environment.

The orchards and gardens are a haven for birds. Each year there are more species of birds. This year, the King Parrots have been hanging around more than ever.